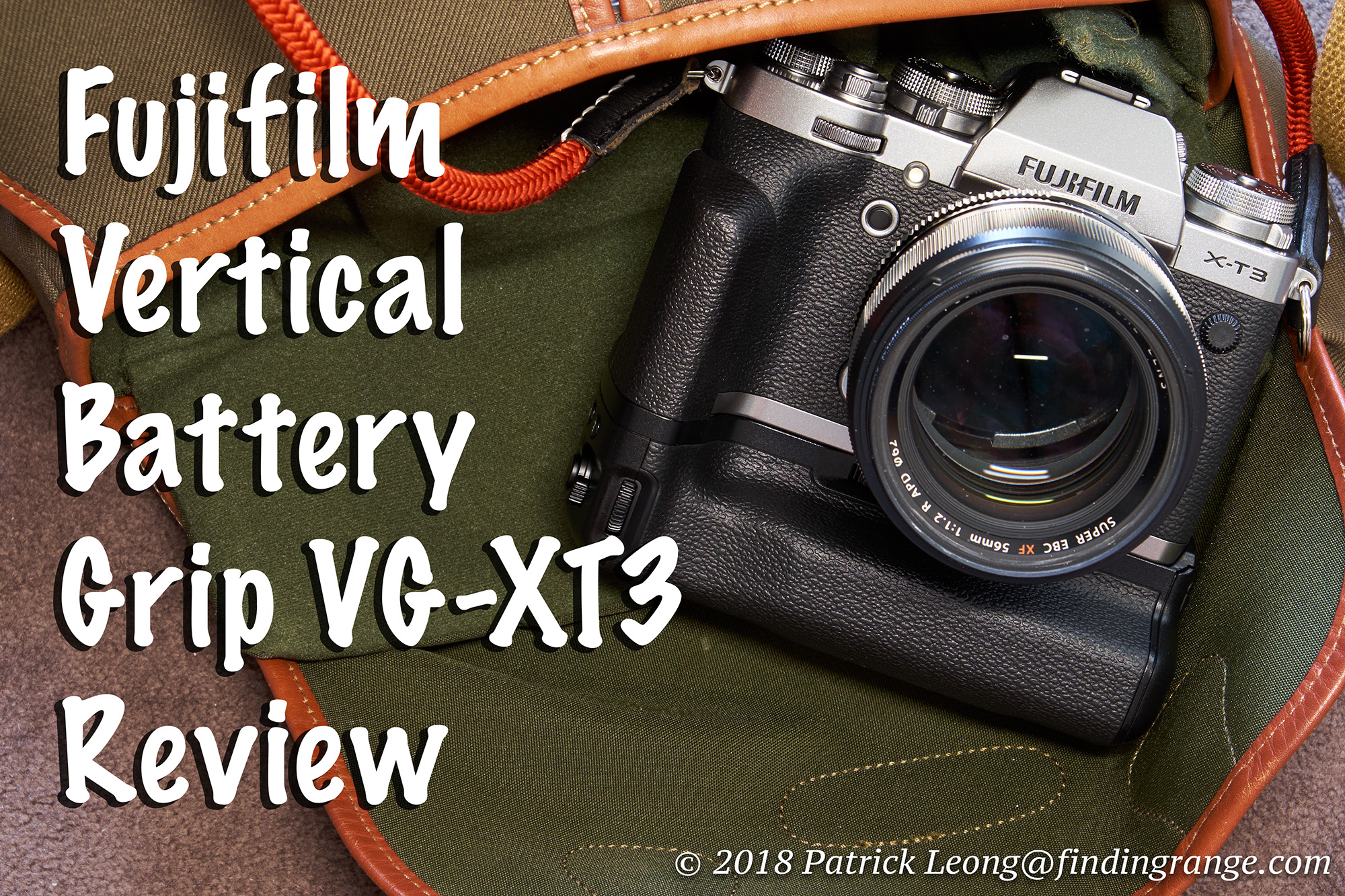 The new Fuji X-T3 is a versatile camera that is up to pretty much any task you can throw at it.  It offers the perfect blend of features, such as, being well-made and weather sealed.  The electronics and autofocus are also ultra fast.  To top it all off, the X-T3 produces superb images.  At least for me, there’s not much more I would need in an APS-C mirrorless camera.  It also comes in silver, which I personally love :).  However, if you’re finding yourself shooting in portrait orientation a lot, it might be time for you to take a look at one of the X-T3’s new accessories: the Fujifilm Vertical Battery Grip VG-XT3.  At $329, it’s not exactly cheap but it can offer say the portrait photographer much needed ergonomic support.

In terms of build quality, the VG-XT3 feels just as well-made as the X-T3, which is important because no one wants a vertical grip to feel like an afterthought.  You’re going to be gripping it constantly, so you want it to feel stable, secure, and to inspire confidence.  Simply put, there are no creaks or any kind of movement when the VG-XT3 is attached to the X-T3. Together, the Fuji X-T3 and the vertical grip feel like a one piece unit. 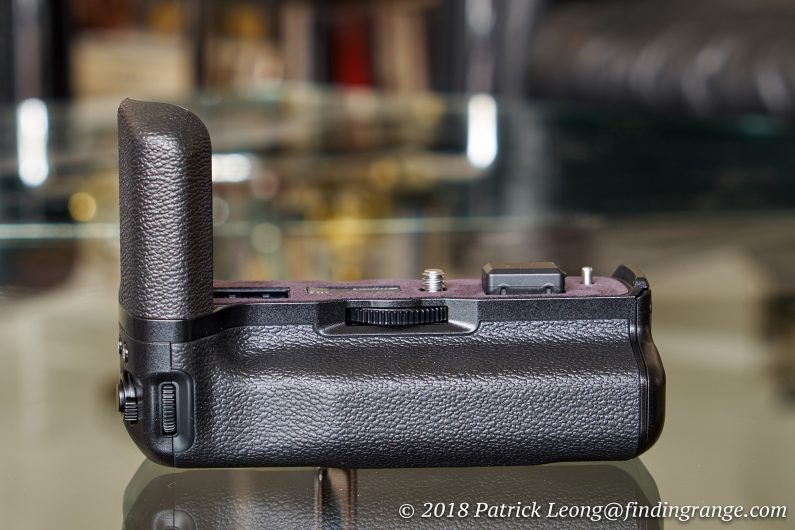 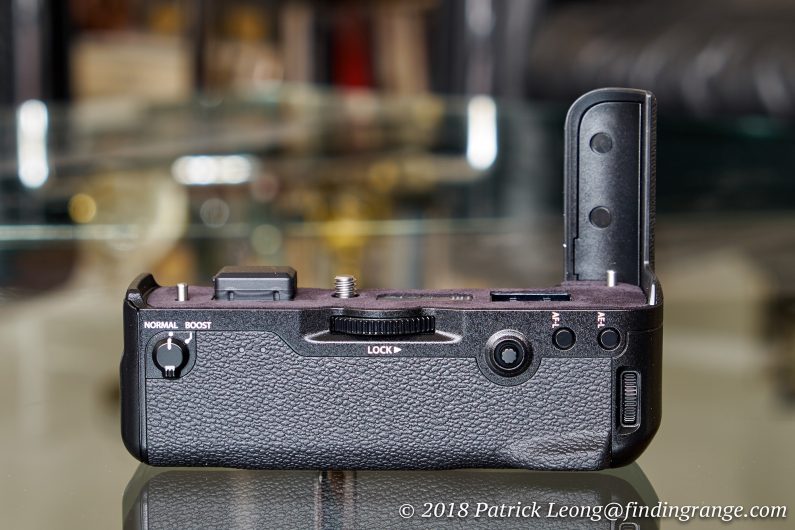 It’s also worth nothing that like the X-T3, the Fujifilm Vertical Battery Grip VG-XT3 is built to handle tough weather conditions.  It’s dust and weather resistant.  It can also be operated in temperatures as low as -10°C. 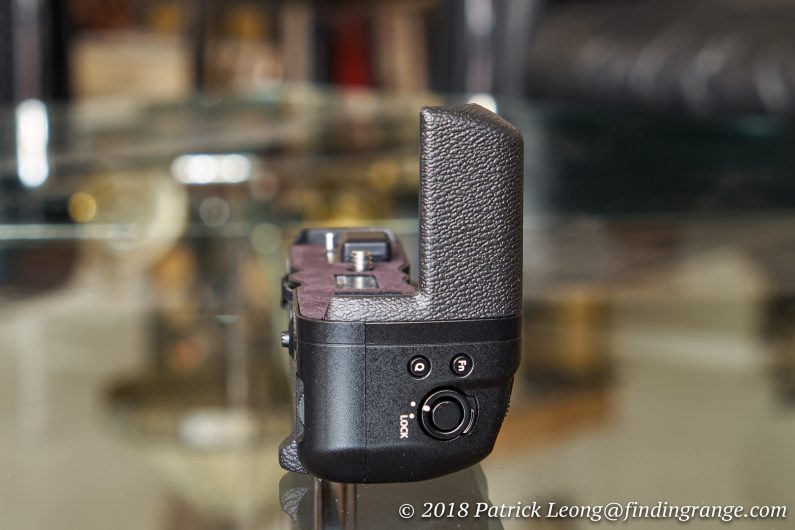 ↑ The VG-XT3 has a lock on the shutter button to prevent accidental firing. 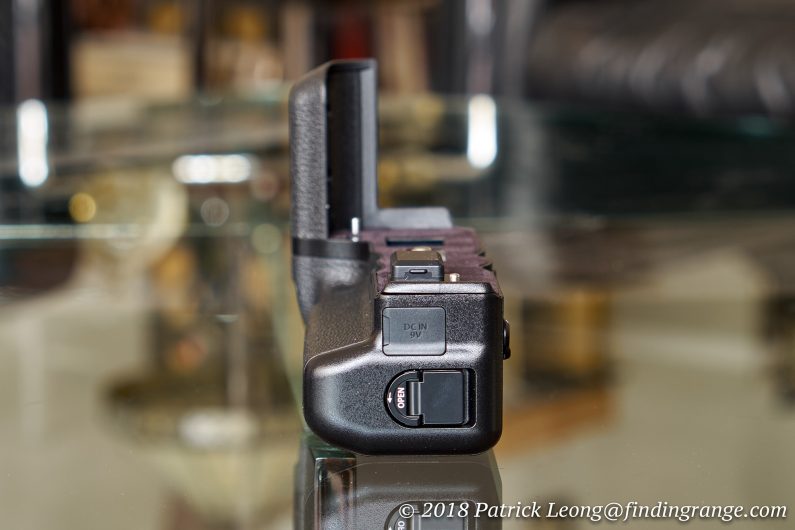 You can also find a lot of the same features on the grip that you would find on the X-T3.  For instance, it has a focus lever, AE-L button, AF-L button, front and rear command dials, Q button, Fn button, and of course, a shutter release button.  The shutter release button even has a lock on it to prevent you from accidentally pressing on it, and firing off shots.  There’s also the Performance Selector where you can choose to shoot in Normal Mode or Boost Mode.  On the bottom of the grip, there’s an eyelet for a camera strap, and a tripod mount. 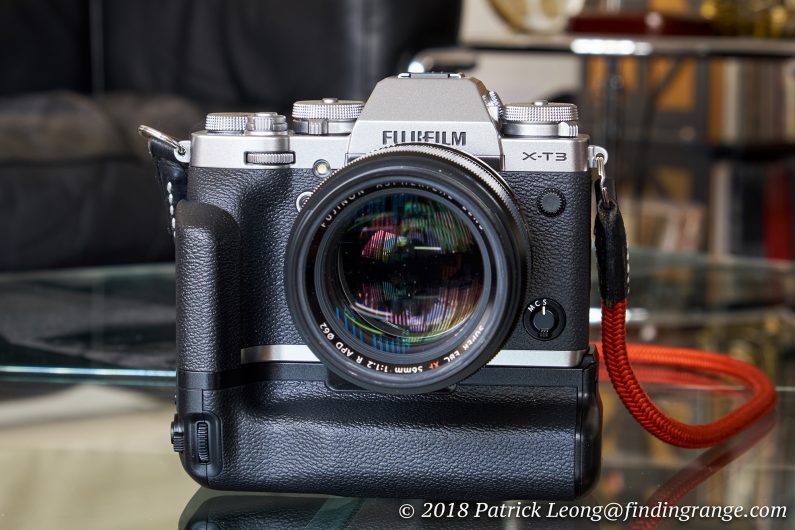 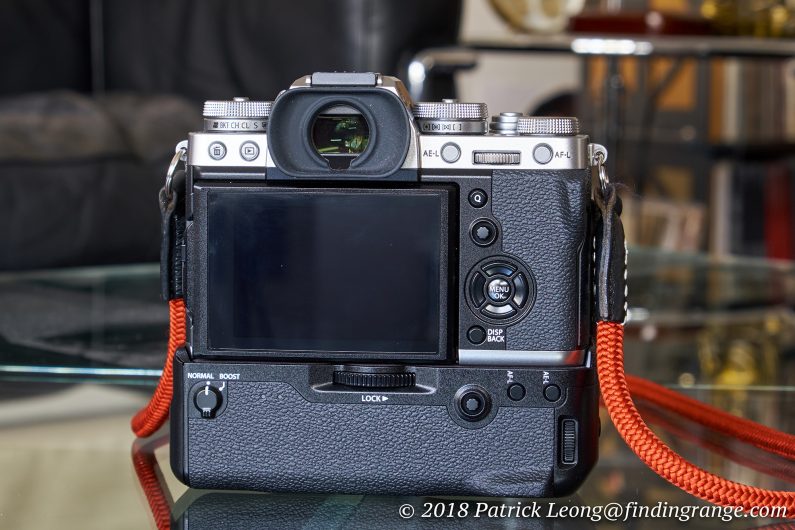 Attention to even the small details are clearly evident.  For instance, there’s even a small compartment on top of the grip for the rubber cover that you would have to remove from the bottom of the Fuji X-T3 in order to attach the VG-XT3.  This is a great idea because the rubber cover is not only small and easy to lose, I bet it would be pretty hard to replace too.  Finally, there is a 9 V DC-IN connector, which is protected by a rubber cover.  In this way, you can charge the batteries simultaneously in the grip, which take just about 2 hours for full charges.  Speaking of the batteries, the VG-XT3 will hold two, and together with the one in the X-T3, you can shoot around 1,100 shots in Normal Mode. 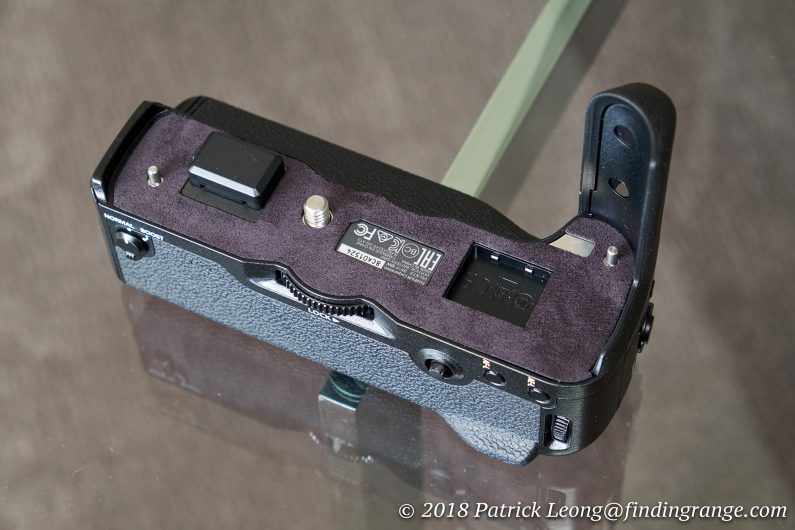 ↑ The part of the VG-XT3 that attaches to the X-T3 is felt lined. 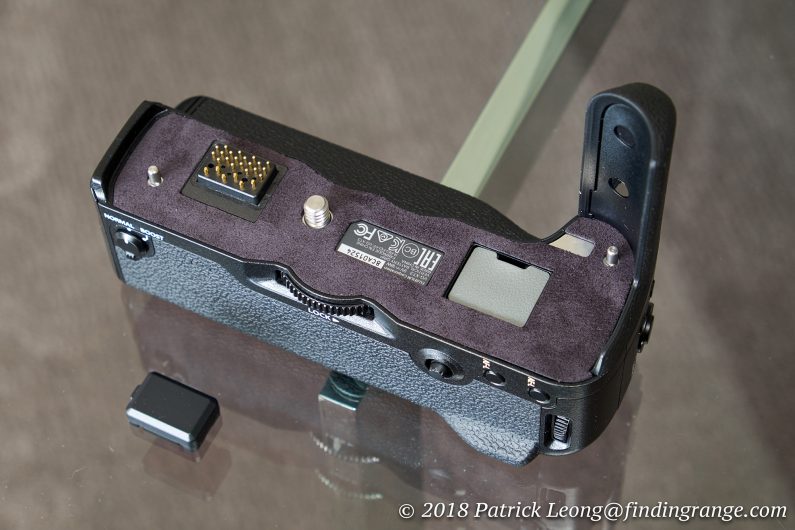 ↑ As you can see, there’s a small compartment for that gray rectangular rubber piece from the bottom of my X-T3.

To sum it up, the build quality is great, and there’s even a slight improvement in quality over the previous VPB-XT2 Vertical grip for the X-T2.  I mentioned in my VPB-XT2 Review that I felt the added grip that goes over the X-T2’s existing grip was a little flimsy, and it appears that Fujifilm has remedied this issue.  The VG-XT3’s added grip is actually a bit thicker, and more sturdy.

Overall, I found the Fujifilm Vertical Battery Grip VG-XT3 to be extremely comfortable, and it offered plenty of support for shooting in the portrait orientation.  I shoot a lot of portraits, and often times, my sessions can last a few hours or even all day, and the VG-XT3 has made my life a lot easier.  Not only is the comfort obviously better when shooting in the portrait orientation, the handling in the horizontal position is better for me as well.  The extra grip that goes over the X-T3’s adds additional support in the horizontal position.  I don’t find it too big; in fact, it fits my hands perfectly, and it does feel better than the one on the VPB-XT2. 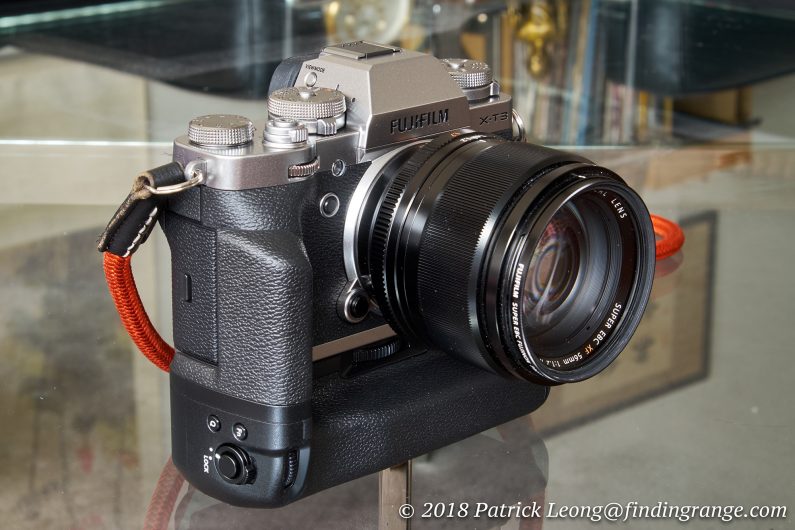 Furthermore, you have all the essential buttons on the VG-XT3 that you would find on the X-T3.  They are also, for the most part, in positions that feel very natural to me.  The only thing that I would like is the shutter button to be placed slightly lower on the grip but this is personal preference.  No ones hands are the same, so in my opinion, this isn’t even really an issue. 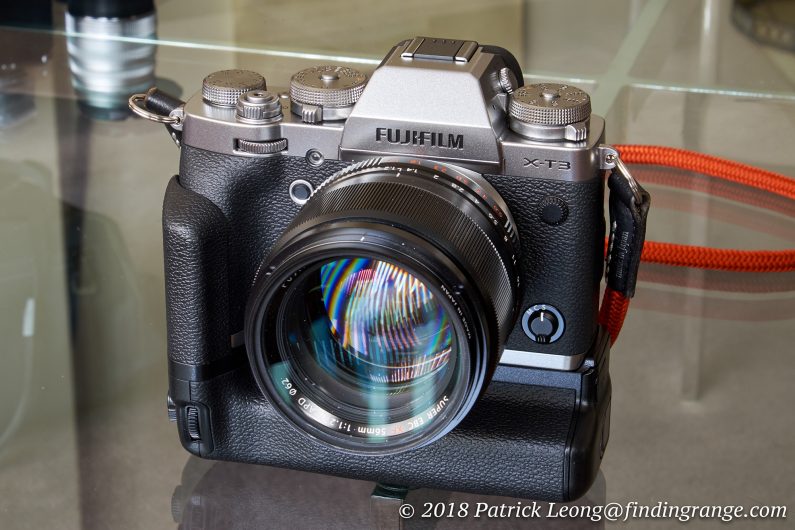 The only really big issue that I can think of for some might be that the Fujifilm Vertical Battery Grip VG-XT3 makes the X-T3 heavier and larger.  But this is a given, and if the grip is essential for your work, then you learn to live with it.  With that said, the camera with the grip doesn’t weigh a ton.  The grip weighs just 282 g without the batteries.  I shoot portraits weekly, and as I said, sometimes my sessions last all day.  I’ve been using the VG-XT3, and it hasn’t really caused me any issues or extra fatigue.  In fact, I actually welcome the added weight.  I find some cameras a little light for my taste these days, and the VG-XT3’s added weight helps me steady the camera better.  It’s also worth mentioning that the camera is not only very well-balanced with the grip attached, it’s arguably more so depending on your lens choice. 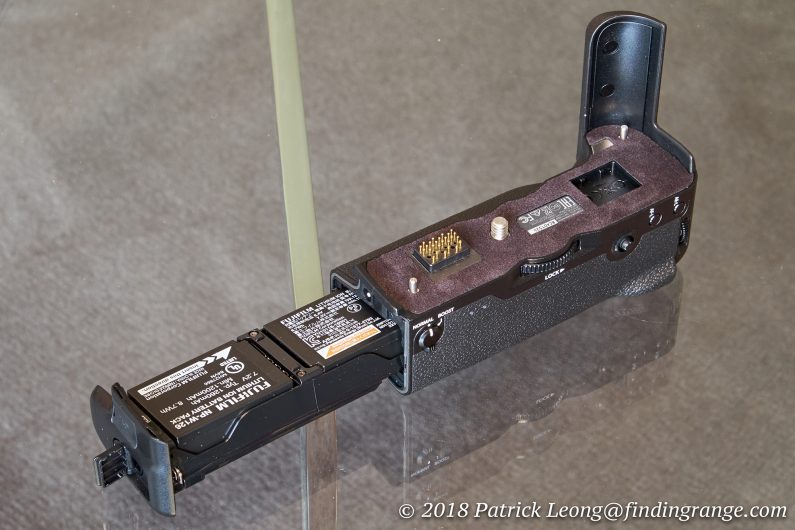 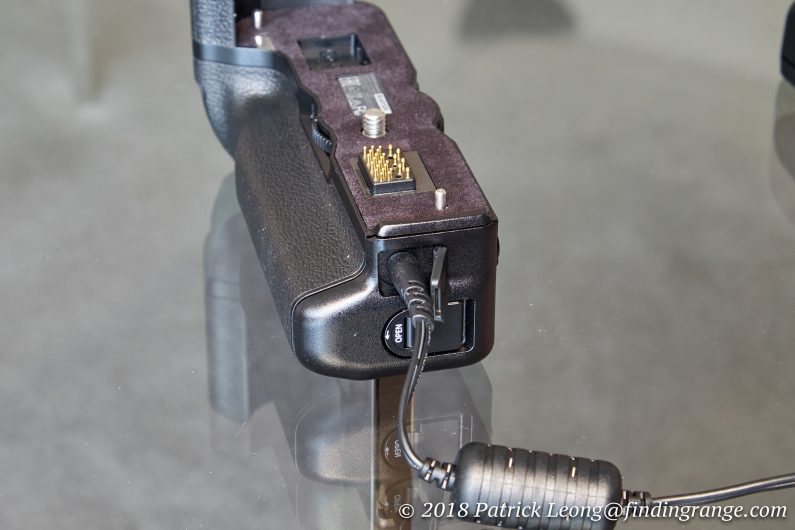 ↑ The VG-XT3 has a charging port for those batteries.

The only issue I have is that the size does make it a little more inconvenient.  For instance, the Fuji X-T3 with the grip won’t fit as well in some of my smaller bags.  Changing lenses while walking is a a little harder.  The grip makes the camera more conspicuous.  But then again, it’s pretty much a given that these inconveniences come with any grip not just with the VG-XT3.  It’s just something you learn to deal with, if a vertical grip is essential for your photography.  I’ll tell you one thing: this grip definitely improves the X-T3’s handling when you’re using lenses like the XF 90mm or even the XF 56mm for portraiture.  In my opinion, if you’re doing a lot of portraits, and you’re using a lot of these big and wonderful optics, the VG-XT3 is something that will definitely help, and you’ll find that the minor inconveniences I mentioned, are exactly that; just minor. 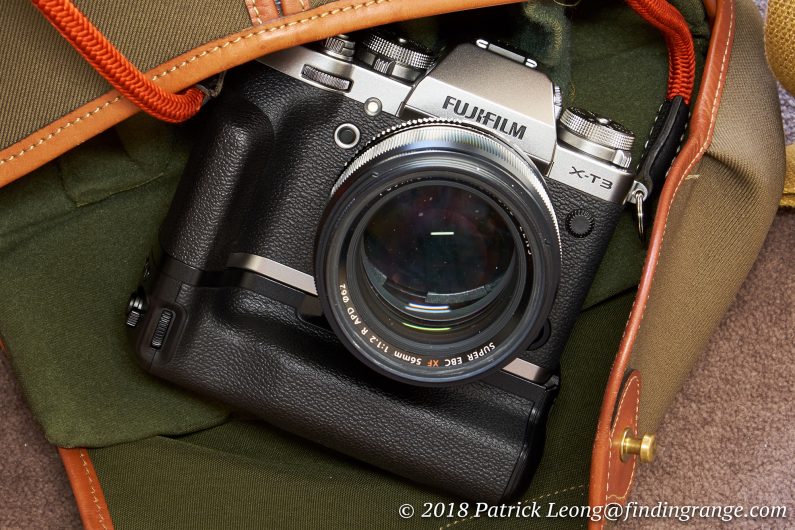 Overall, I was quite happy with my VPB-XT2 for my X-T2, and the new Fujifilm Vertical Battery Grip VG-XT3 feels just like it but with even a couple of improvements.  In my opinion, this is really one of the nicest grips out there right now regardless of manufacturer.  The ergonomics are, for the most part, superb, and controls are well-placed.  The VG-XT3 is well-made, and feels like it actually belongs on the X-T3 if you get what I mean, instead of feeling like an afterthought, which some grips can feel like.  $329 isn’t cheap but I feel this is well worth the price, if you’re looking for more support while shooting in the portrait orientation.  This probably isn’t a must-have accessory, since not everyone will need to the benefits but for those who do, I can’t recommend the VG-XT3 enough.

Thanks for taking the time to read my review!  If you’re considering purchasing the VG-XT3, and my review helped you decide, please help support this site by purchasing from any of the links in this review.  It will not cost you anything extra.  Thank you for your support!