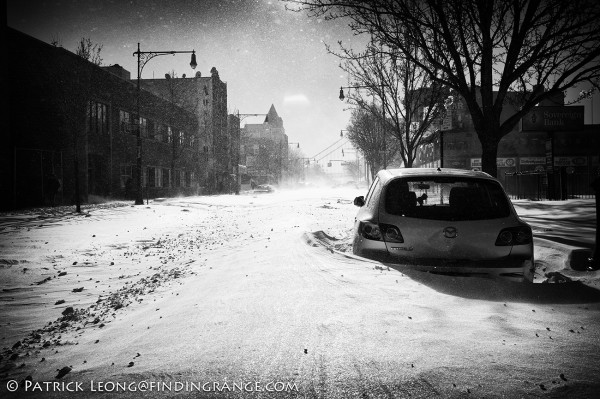 The answer to that question is…yes it can! 🙂  Why am I talking about winter?  Well, it has been on my mind, and it is coming up.  Why am I talking about the Leica M9?  Because after two years I still love this camera :).  You can get an M9 here at Amazon or here at Adorama.  As the days are getting shorter, and the temps are falling, I find myself pondering on what kind of cool photos I can take especially during the Christmas season, which seems to be rapidly approaching (Thanksgiving is not even here, and I already see Christmas decorations going up).  One thing you should know about me is that I love winter.  Why?  Well, for one, I can actually walk around New York City because most people stay in :).  But besides the crowds, I believe that New York City looks better in the winter.  There’s snow on the ground, the the air is fresh, and everyone’s dressed in their gigantic coats.  And personally, I love taking photos in the winter especially with my Leica M9.

Ever since the release of the Leica M9, I’ve heard a couple of random posts on forums talking about the survivability of the M9 in cold weather.  There are a couple of people who say that the batteries die significantly faster or there are shutter problems but I’ve used my M9 in cold weather with no problems at all.  This goes for another M9 I once owned, a loaner M9, and a photographer friend’s M9.  Now I’m not saying that people don’t have problems.  I’m just saying that I’ve never had an issue before.  And to hopefully help prove this, I’ve added photos that I’ve taken during the December 2010 blizzard that basically disabled New York City.  All the photos were taken in Bayridge Brooklyn where I live because transportation was basically immobilized.

The Leica M9 And The Cold:

I think sometimes when people buy something like a Leica M9, they treat it a little more delicately than some other camera.  It’s perfectly understandable.  It’s extremely expensive, hand assembled, and it’s one of the best looking cameras that I’ve seen.  It’s like scratching your Ferrari.  Plus, something like a Leica has legendary status, and with that, sometimes a person can get all caught up in all that stuff.  Hey, I’m not saying anything is wrong with it.  I’m guilty too because in some ways, I’m like that as well.  I like my M9 in good condition, and I don’t see anything wrong with that.  It doesn’t mean that I don’t use it.  But sometimes I don’t see the point in scratching it up just to prove that I use it.  But, if it did get scuffed up while I’m using it, well, then that’s a different story. 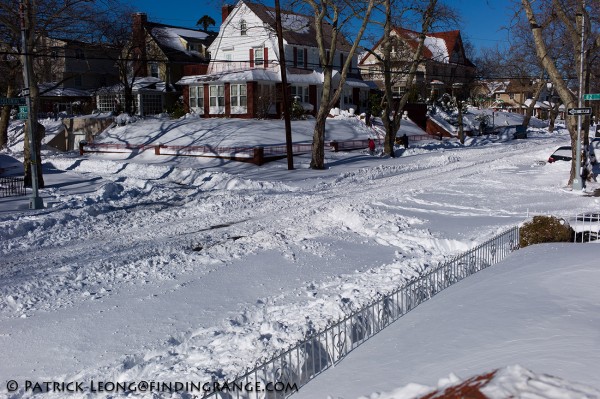 ↑ This is how it looked like in front of my house.

Sometimes people get caught up an idea (like trying to find out what is wrong with something) but I am here to tell you that I have had no issues with my Leica M9 in cold temperatures.  I used the camera all winter long in New York City, and not one problem has ever occurred.  I don’t leave my M9 in the bag either.  I have it wrapped around my neck the whole time absorbing all the cold that mother nature has to offer.  I’ve walked in single digit temps, with wind chills in the negatives, and my M9 still keeps on going strong. 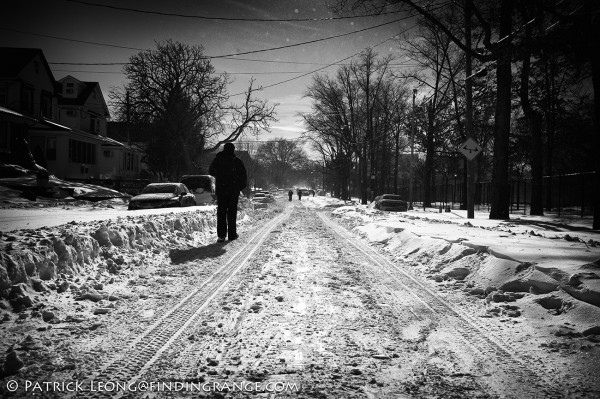 ↑ There was no driving.  The only way to get around was to walk.

Did my sensor crack?  I’ve never cracked my sensor before.  I’m not saying no one hasn’t.  But I bring my M9 out with me every time I leave my house, and this includes the winter.  My sensor hasn’t cracked yet.  Plus, for $7000 I’m pretty sure Leica did some thorough testing.  And don’t forget, Leica was banking on the Leica M9 to be successful especially after they had some problems with the M8. 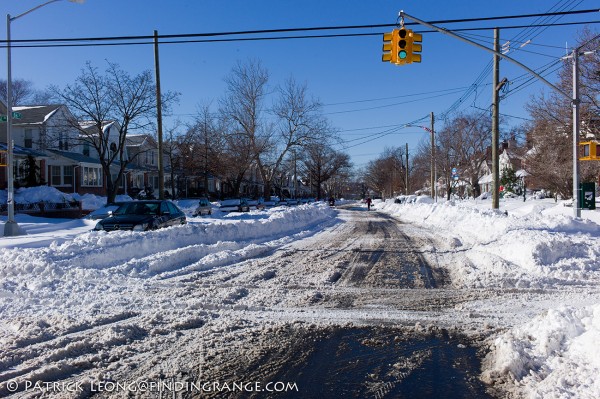 ↑ There was absolutely no way to drive for days

Did any operations slow down in the camera?  I didn’t experience anything different.  No electronic problems, no shutter problems, and no screen problems whatsoever.  Maybe I have a good copy of the Leica M9 but I had two before, a loaner, and my photographer friend has one as well.  All four M9’s operated the same way. 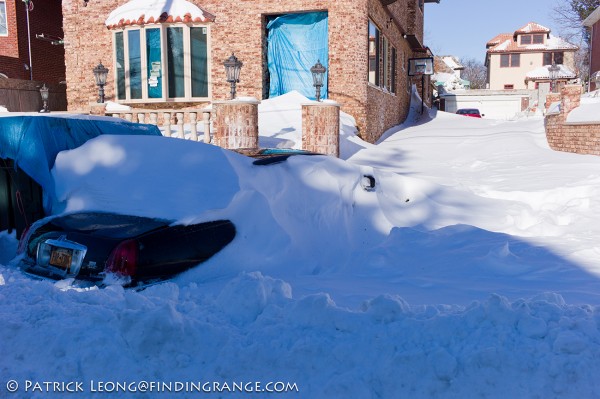 ↑ Here’s a car that couldn’t make it up the driveway so it was just left on the street where it was buried by the storm. 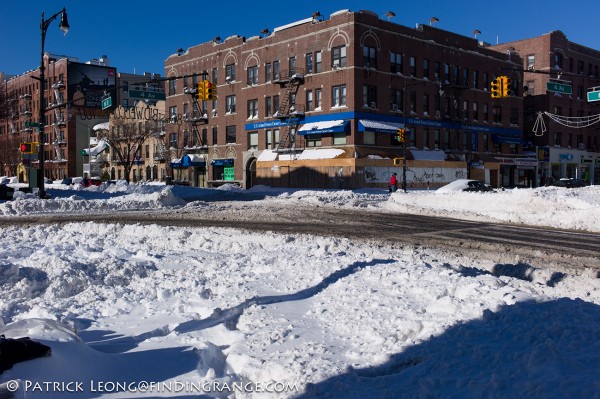 How about any battery issues?  I’ve had none at all.  Seriously.  But then again, I don’t count every single picture that I take either.  What kind of scientific experiment is that anyway?  There are so many factors to take into account….how many times you look at the screen, how many times you wake the camera up from sleep mode, etc.  I never warm my batteries either.  I leave them in the outside pocket of my bag, and trust me on this, they’re cold as hell when you take them out :).  I’ve never once seen any noticeable difference in power drain when I use my Leica M9 in the winter. 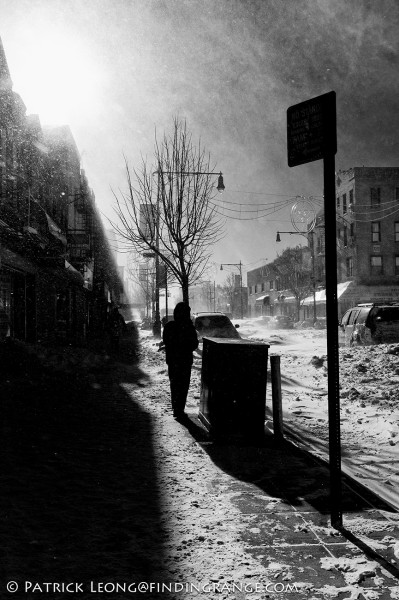 ↑ The wind was crazy out there.  It blew snow everywhere but didn’t effect my Leica M9 at all.  My M9 was wrapped around my neck the whole time. 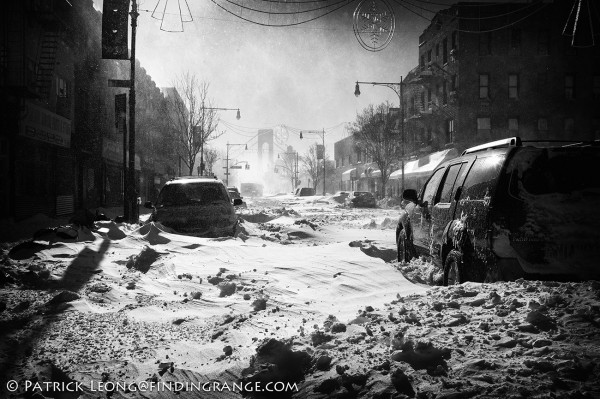 ↑ This was 4th Avenue not a parking lot.  People abandoned their cars in the middle of the street during the blizzard. 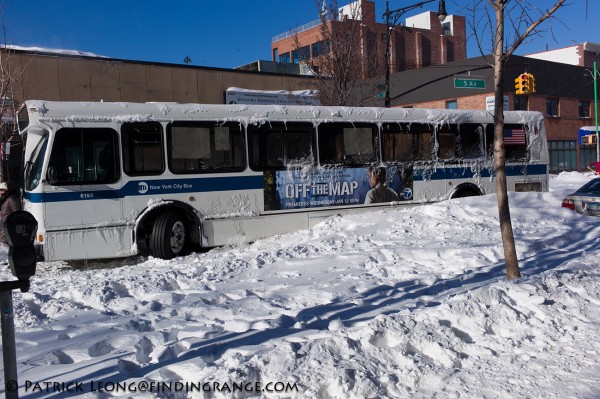 ↑ Even MTA buses were abandoned in the middle of the road.

If you have a Leica M9 or plan or getting one (you can help me and this site a lot if you buy it through this link at Amazon or this link at Adorama) know that you can use the camera just like any other camera.  I’ve had no issues with the M9, and it has been a pure joy for two years in all types of weather.  This post is in no way trying to make light of people who have had problems with their M9.  I’m just saying that in my personal experience, I’ve never had any issues with my M9.  Plus keep in mind, I’m not trying to make an excuse for Leica but like all manufacturers, there will be a couple of lemons out there.  But even after two years, the Leica M9 is my dream camera, and has never given me any major problems.  The only thing that one might consider if they want one?  The brass body gets awfully cold in the winter.  I’m almost afraid to stick my tongue to my M9 for fear of getting my tongue stuck to it :).  Here’s some more photos, hope you like them. 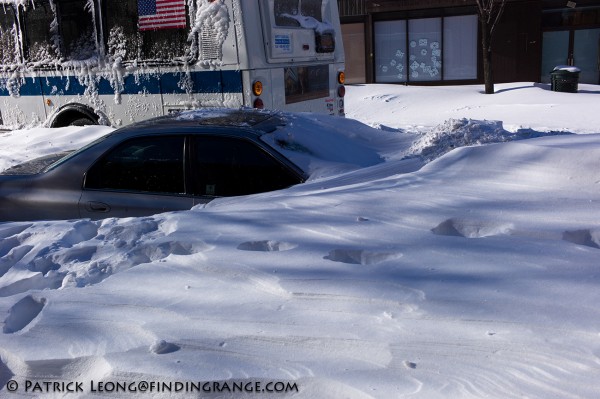 ↑ That amount of snow was something I never saw in New York City. 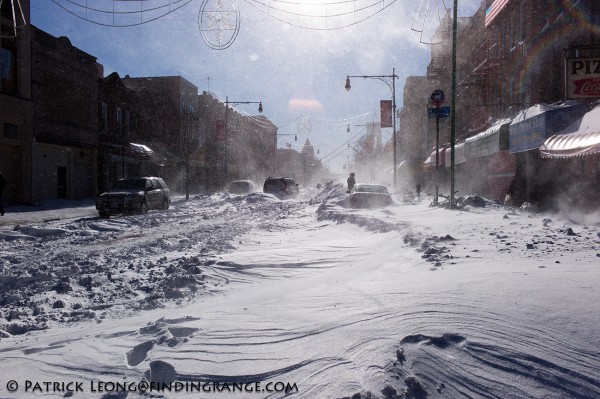 ↑ Another view of 4th Avenue. 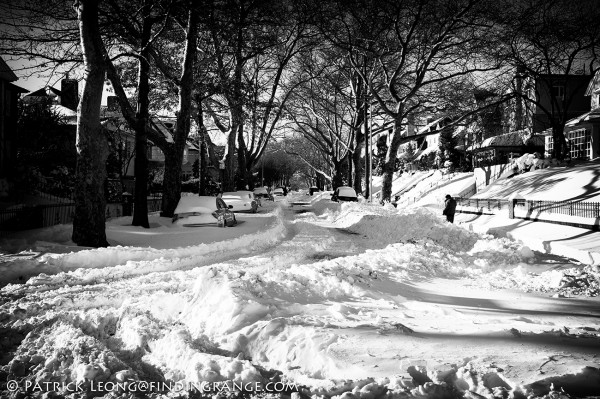 4 comments… add one
Firmware Update 1.174 For The Leica M9
Finally Some Fall Photos With My Leica M9