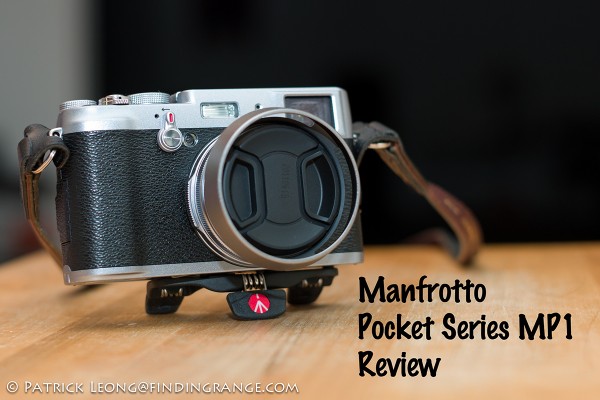 Sorry for the lack of content in these past few days.  More is content is coming, I’ve just been swamped lately.  A couple of weeks ago, I received something pretty cool (and cheap!): The Manfrotto MP1 Pocket Series Tripod (which can be found at Amazon or Adorama).  Many of you probably don’t use tripods as much with your Leica or Fuji X100 but this one is actually kind of cool.  It’s designed for people who don’t want to carry something as cumbersome as a full size tripod BUT sometimes need something that will help them prop their camera up on a flat surface.  Come on…there must be times when you wish you can actually take a picture of yourself at an exotic place without doing those stupid self portraits with your cell phone :).  The best thing about it: You can leave it on the camera all the time.

Build Quality of the Manfrotto MP1:

Well, for a list price of $28 (Amazon sells it for 24.98 with free shipping), the Manfrotto MP1 is actually built really well.  I believe that it’s made out of metal.  It sure feels like that in terms of the weight.  The surface that comes in contact with your camera has rubber on it to avoid scratching the base of your camera.  When you extend the legs of the Manfrotto MP1, there’s enough resistance so your camera doesn’t change position but not too much resistance as to be a pain to extend. 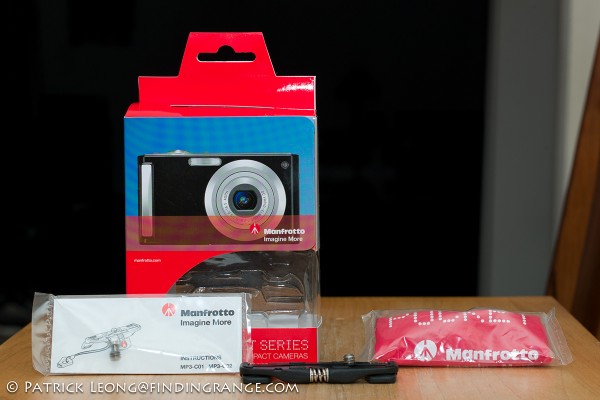 ↑ The Manfrotto MP1 comes with instructions, a spare tripod screw, a bag, and a key to help you screw the tripod screw into your camera. 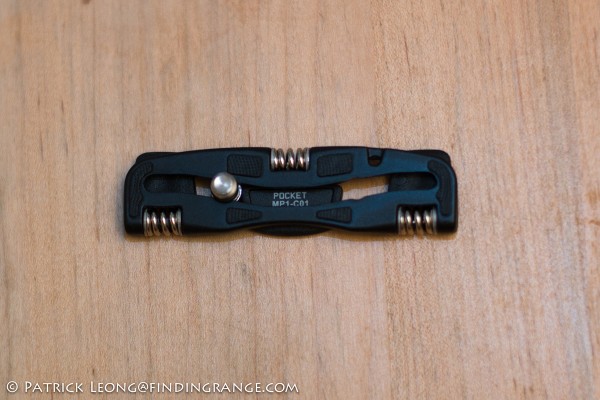 ↑ Top view of the Manfrotto MP1 with the legs fully retracted.  Notice the rubberized protection to prevent any scratches to the base of your camera. 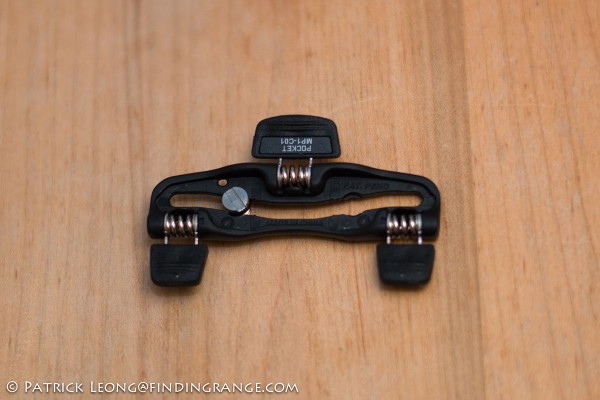 ↑ Bottom view of the Manfrotto MP1 with legs fully extended. 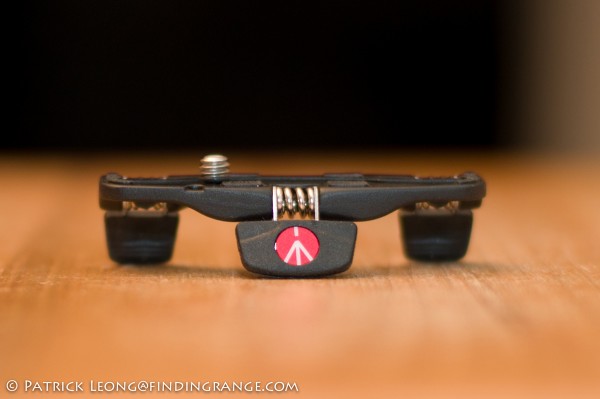 ↑ The Manfrotto MP1 on a table.

The legs work really well too.  As you can see in the first image of this review where I have it attached to the Fuji X100; I can actually tilt the Fuji pretty easily, and it will stay in that position.  It also comes with a key with a string so that you can easily screw the tripod screw into the camera. 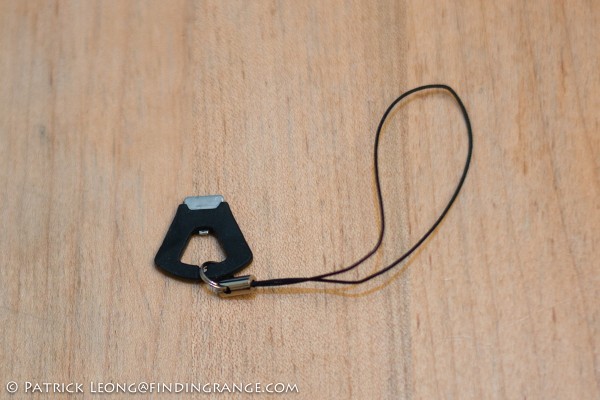 ↑ The key simply turns the tripod screw into the camera.

How is the Manfrotto MP1 in actual real world use?:

Well…it works!  I had my doubts on whether it would really work on my Fuji X100 because it’s so small but it does!  BTW, just so you know, Manfrotto does say that you can use this with even smaller DSLR’s.  According to Manfrotto, it can support a maximum load of 1.3 lb (0.6 kg).  Plus, the beauty of the Manfrotto MP1 is that you can leave it on the camera permanently because it’s so thin and inconspicuous.  It doesn’t add much wait to the camera (it only ways 0.06 lb or 0.03 kg) so you can carry it all day.  the Manfrotto MP1 is perfect for travel because it’s a travel accessory that does not take up much space or weight in your bag.

The MP1 is also quite adjustable for something like this.  For instance, it can slide from left to right to suit your cameras needs.  Just imagine if you have something like a Leica MP.  The place that you screw your tripod in is on the edge of the camera.  With the Manfrotto MP1, you can adjust it so that it centers when attached to the camera. 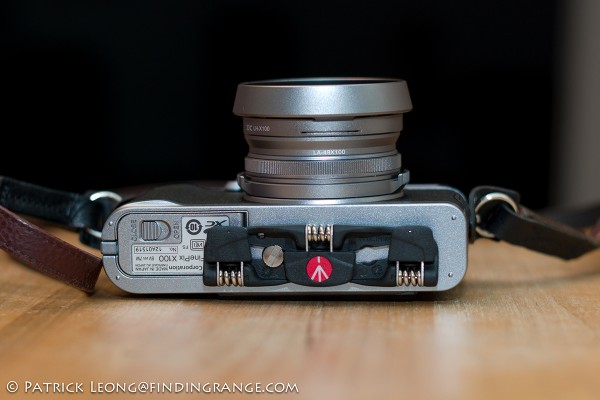 ↑ Here’s the Manfrotto MP1 attached to the Fuji X100 one way. 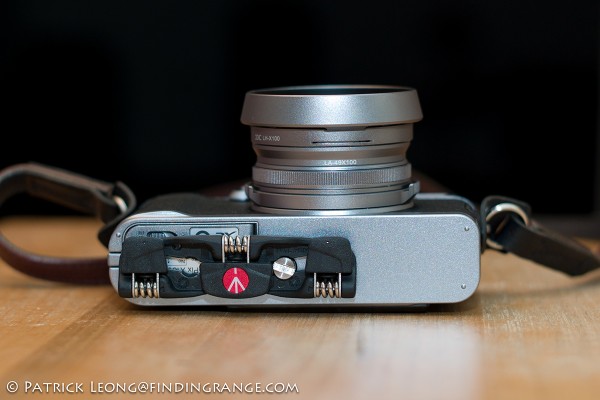 ↑ Here’s the Manfrotto MP1 attached to the Fuji X100 another way.

So is the Manfrotto MP1 worth it?:

There are so many accessories out there for both your Leica and Fuji X100, and I don’t see why anyone wouldn’t add the Manfrotto MP1 to the list as well.  It goes with the Leica/Fuji X100/four thirds philosophy of being discreet, inconspicuous, and not cumbersome.  It’s super thin when attached to the camera so it does not add much to your camera’s profile.  It’s also very light so there’s no reason to take it off (maybe to change the battery or memory card if you have a Fuji X100).  Seriously, even if you prefer to not have it on your camera 24/7, its small enough and light enough that it won’t take up much room in your bag or even your pants pockets.  The MP1 is also built very well with quality materials.  It’s very useful because even I wish sometimes I had something to prop my camera up.  You know another big reason for why you should buy one of these?  The Manfrotto MP1 sells for about $25.  You can find at Amazon (black one or grey one) or Adorama (black one or grey one) with free shipping.  It’s not much of an investment for something that can really help you out greatly in the world of photography especially when you’re travelling to some exotic location with a light outfit.