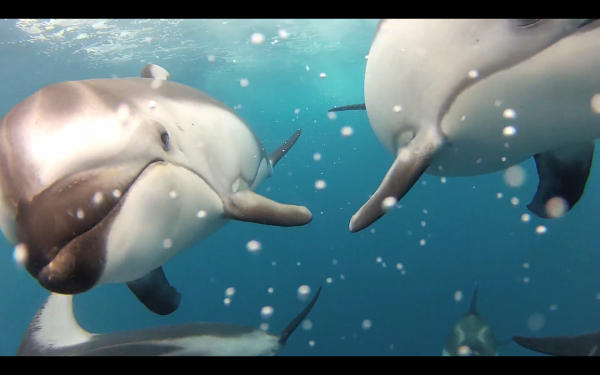 Hey everyone, check out this cool video that I found on the Discovery Channel website.  It’s a video made by a fisherman named Mark Peters.  Yes, this is a photography website but this video is pretty cool, and it was shot with a GoPro that was incased in a custom underwater case made by the fisherman who uploaded the video.  He and his buddies were fishing for Albacore in Santa Cruz, and decided to mount the underwater GoPro setup to film the whole thing.

But to their surprise, while they were fishing, a group of Pacific white-sided dolphins started to school behind their boat.  I had a few dolphins swim up to me while I was fishing in New Jersey but nothing like this.  This is just awesome, and makes me want to buy one of these GoPro cams for my fishing trips lol.  You can see the dolphins at the 1:50 point.   Very cool video, you should watch it: