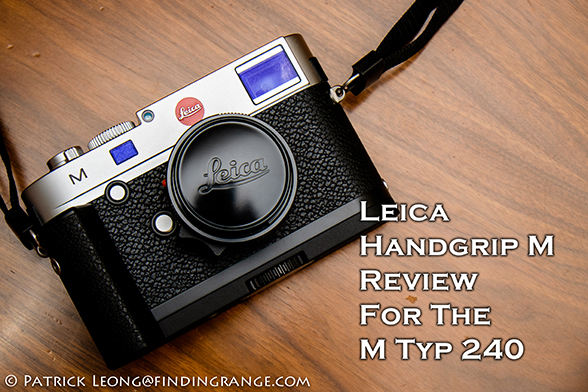 For the most part, Leica digital M cameras look and feel like their film siblings.   It’s one of the main selling points of a camera like the Leica M Typ 240, and personally, I wouldn’t have it any other way.  However, everyone’s hands are different, so some will find that they need more adequate support when handling the M 240, especially when using heavy lenses like the Noctilux or even something like an R lens.  Several third party manufacturers have released handgrips, and “thumb grips” to help individuals achieve better support, and stabilization when holding their M cameras but so has Leica. In fact, Leica has introduced two types of grips: one with integrated electronic functions, and the one that I’m going to talk about here, the Leica handgrip M, which has only one purpose: to make the camera more comfortable to hold.

I don’t think that I’ve ever had an M product that I thought was built on a subpar level, and the Leica Handgrip M is no exception.  This handgrip matches the build quality of the M 240 in every way: it’s solid, sturdy, and extremely well built.  When it’s attached to the M240, the whole package feels extremely dense and solid.  I bought the M9 Handgrip, and while that was also built to high standards, I find the M 240’s version even better. 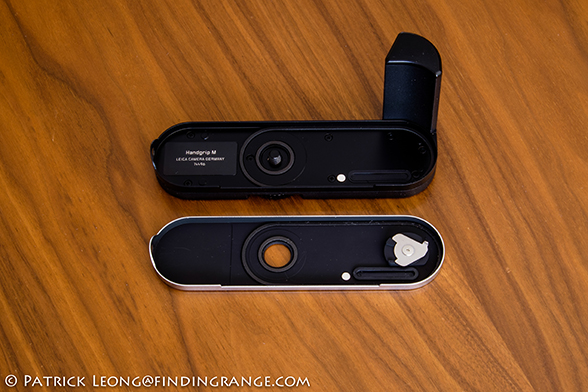 ↑ Here’s a sided by side comparion of the insides of the M 240 baseplate and the Leica Handgrip M.

Attaching the Leica handgrip is straightforward: the handgrip replaces the baseplate of the M240 but unlike the M9 Handgrip, the M 240 version has a knob that screws into the tripod mount of the camera making it more sturdy.  There’s also a tripod mount on the baseplate of the handgrip, so you can still use a tripod if you want.  Some might find it a little inconvenient screwing the handgrip on and off because it’ll take a bit longer to access the battery and memory card but the truth is, it doesn’t take that long to take it apart.  Also, the M 240’s battery lasts a lot longer than the M9’s, and nowadays, you can purchase SD cards with a lot more memory, so you don’t really have to take the handgrip off as much as you used to. 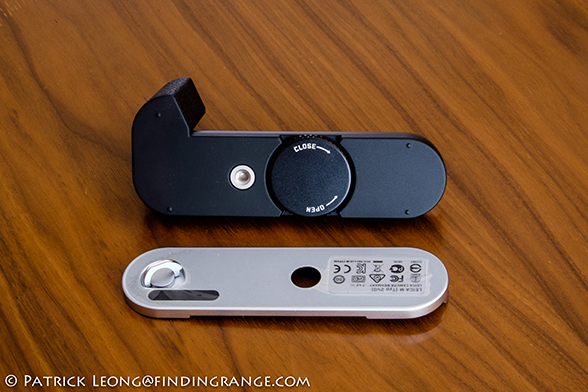 ↑ Here’s a side by side comparion of the bottom portion of the M 240 baseplate and the handgrip.

For the most part, the M 240 fits my hands nicely, and I’ve never felt the need for anything more.  But it’s like one of those things where you’re perfectly happy with something, and feel like you don’t need anything better until you actually try something better.  The Leica handgrip actually does make a difference. 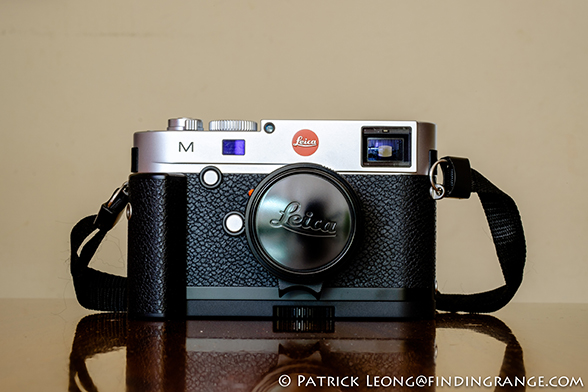 The Leica Handgrip M makes it more comfortable to hold and stabilize the M 240 not only when I’m using longer lenses like the 75mm Summilux but also with compact lenses like the 35mm Summicron.  I find it much easier to shoot while holding the camera vertically, and I also put a lot less effort in trying to stabilize myself, which allows me to shoot with more ease in low light situations or with low shutter speeds.  It’s also worth mentioning that the handgrip makes one handed shooting a lot easier.  Attach a 35mm lens or wider, set it to a small aperture, and just point and click. 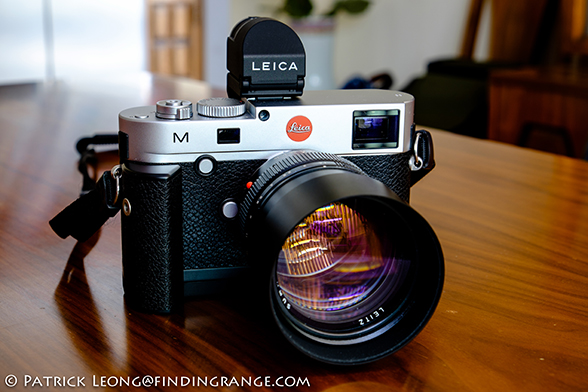 But like everything else in the world, there are always trade offs.  In this situation, for the added comfort and support of this handgrip, the tradeoff is added bulk and an increased height.  That’s because unlike the M9 Handgrip, the M 240 version has two layers that make up the base of the handgrip.  From what it looks like, I believe the purpose of the second layer is to make the base of the camera flat because as I said before, there’s a knob at the base of the grip to help you screw the handgrip into the tripod mount of the M, so there’s material that is needed to fill the sides of the base where the knob isn’t.

But the added bulk is not significant, and the grip is actually better designed than previous M grips in that it flows with the design of the M 240 much more nicely.  Some handgrips feel like they were designed as an afterthought (even some OEM handgrips) but on the contrary, the handgrip  for the M 240 feels extremely well integrated into the design of the camera.  It actually looks and feels like it came straight from the factory attached to the camera.  And since it’s better integrated to the M 240 and more streamlined,  it not only looks a lot nicer than the M9’s handgrip, it also feels smaller and fits in the hand more comfortably.  In other words, I find that the handgrip feels better molded to one’s hand than previous M grips.

The Leica Handgrip M is an extremely well made product but unfortunately, like a lot of well made products, it definitely doesn’t come cheap.  I was lucky to get mine for my birthday but for those who are planning to purchase one, expect to spend $300.  But let’s think about the price for a second.  The M 240 costs $6,950 in the US.  The Leica handgrip costs $300.00, which means the grip is a little over 4% of the price of the M 240.  However, let’s look at a camera like the Fuji X-E2.  The X-E2’s list price is $999.00, and the handgrip for that camera costs $129.00, which means the handgrip costs almost 13% of the price of the camera.  Yes, the Leica Handgrip M is still expensive but it’s extremely well made, percentage wise, it’s not so bad, and if it was me, I would want a $7,000 camera to be as comfortable as possible.

For those who want even more support, you can purchase the Finger Loop, which attaches to the grip.  It comes in three sizes and it works great.  I just believe that it should’ve been included with the handgrips.  Also, I know that Leica gear is expensive but at $160, the finger loop, which is essentially a hard rubberized loop with a screw, costs more than half the price of the handgrip itself. 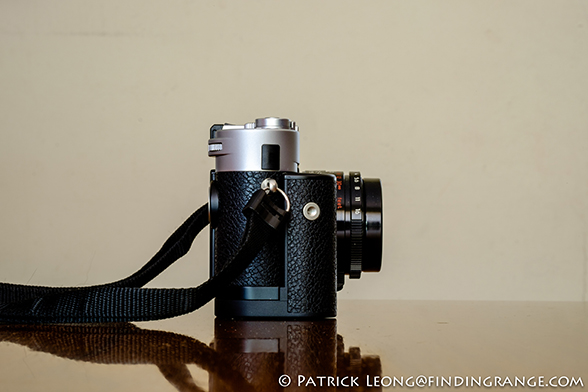 ↑ Side view of the handgrip on the M 240.  Notice the part where you would screw the Finger Loop in.

For those who want certain electronic functions, you may want to consider the Leica Multifunctional Handgrip M.  I just wanted the grip, so I chose the less bulky alternative.  With the EVF2 attached, the multifunctional handgrip attached, and a longer lens mounted, the M 240 becomes a pretty big camera.  In my opinion, this defeats the purpose of owning a Leica unless some of those electronics are needed by the photographer.  That’s why if I don’t need the electronics, I’d much rather go for the slimmer Handgrip M.  It also means that I can save a lot of money because the Leica Multifunctional Handgrip M costs $895.00, and that still does not include the $160 Finger Loop.

I’m one of those guys that usually doesn’t like the bells and whistles on my M.  I have nothing against anybody that does.  I have a lot of friends who love to get all types of accessories for their camera, and there’s nothing wrong with that because it’s their camera; they’re the ones that paid for it, they should be able to do anything they want with it, and who is anyone to tell them what to do or not to do with their cameras?  It’s important to be happy with your M, and personalizing it is definitely one way towards that happiness.  With my M, I like to keep things simple, and I find that sometimes some of the accessories that I add to the camera just make it heavier, bulkier or just get in the way. 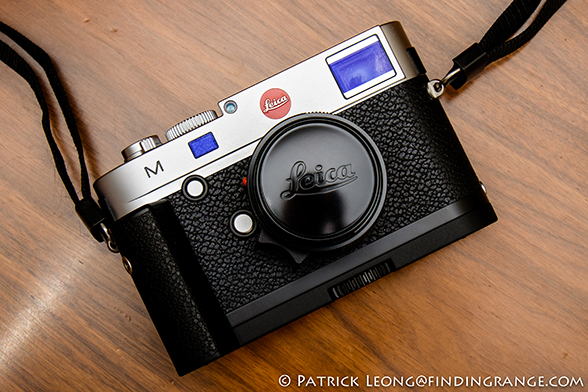 ↑ The Handgrip M attached to the M 240 makes for a very neat little package.

The Leica Handgrip M is different because it’s actually an extremely worthwhile accessory.  It’s built superbly, and it does exactly what it’s meant to do: give you more support and stabilization, especially when holding the camera vertically, shooting in dim lighting or using low shutter speeds.  The handgrip does add bulk but not as much as you would think because I feel that Leica designed this grip better than previous handgrips.  Plus, in my opinion, the grip actually looks great attached to the M 240, and that sure doesn’t hurt.  It would be nice if it came in silver but the black still looks really good on the chrome M 240.  But more importantly, the main concern is addressed, which is having a more secure hold on your camera, and for $300, I definitely think it’s worth it.