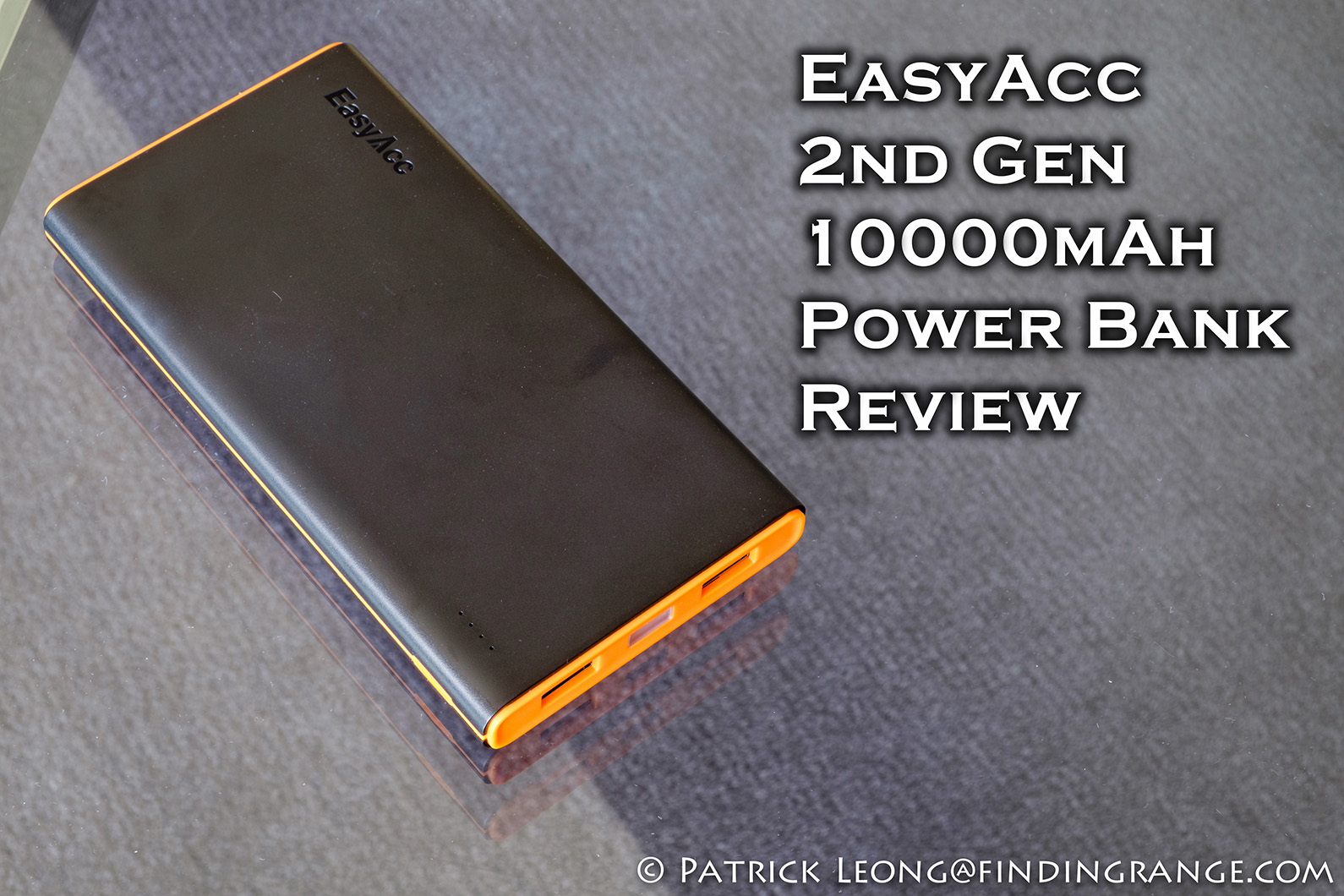 Power banks are becoming increasingly important because we live in a world where we rely on our electronics but in order for our devices to work, they need power.  Ten years ago, I didn’t need a cell phone but now, I hate to say it, I think I would be lost without my smart phone.  The problem is, sometimes I rely on my phone so much that it just doesn’t make it to the end of the day.  It’s not just the phone though; many of us use tablets, Kindles, mp3 players, and there are even cameras with non-removable batteries that can be charged with a power bank to make it through the day.  Take for example, the new Olympus Air, which is something that I’m currently testing.  It has a non-removable battery, so I can’t bring spares with me.  Having a portable charger is great when I’m out with the Air because then I don’t actually need to stop anywhere to charge it from an outlet.  The portable charger that I’ve been using lately is the EasyAcc 2nd Gen 10000mAh Power Bank.  EasyAcc was kind enough to send me one to review, and seeing as power banks are something that I find very useful in my camera bag kit, I thought it would be a great idea to test one out.

Items like power banks in my opinion need to be built very well because these are items that you throw in your purse, your camera bag, shoulder bag, etc. and often times, at least for me, they bounce with my other miscellaneous items.  Plus, I’ve discovered that many of my friends end up using the ones I test when we go out, so my power banks get passed around often, which is perfectly fine because it’s actually a great way to test each one’s durability.  While there are many power banks out there, and a lot of them may offer many of the same features, power banks are not all built the same.  I’ve had one or two that I really liked that fell apart pretty fast.  As of now, I’ve had the EasyAcc 2nd Gen 10000mAh Power Bank for a few weeks, and I’ve had absolutely no problems with it. 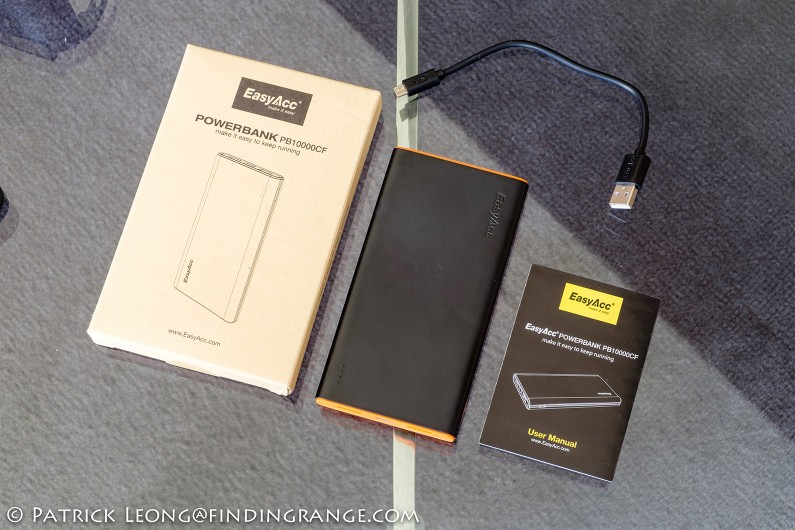 ↑ Here’s what you get with the EasyAcc power bank.

Overall, everything is very well put together.  The pieces are assembled well, and there aren’t any large gaps.  The case is made out of plastic but it’s not a cheap plastic; on the contrary, it’s a very durable finish.  There are no creaks, it hasn’t cracked or opened at the seams, and you can choose from several different colors.  There are also four LED lights that essentially act as a power gauge to tell you how much power you have left, which I find extremely helpful.  There’s even a flashlight, which is a bonus to me in a device like this; it gives me even more of a reason to carry the EasyAcc power bank in my camera bag. 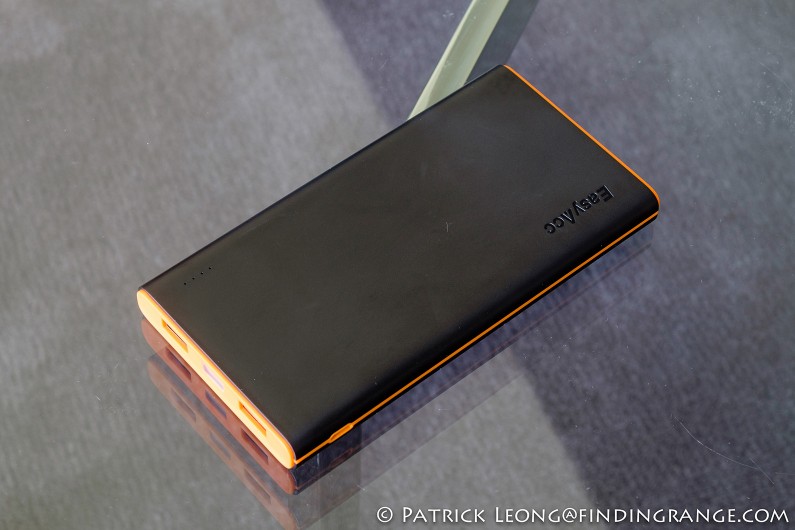 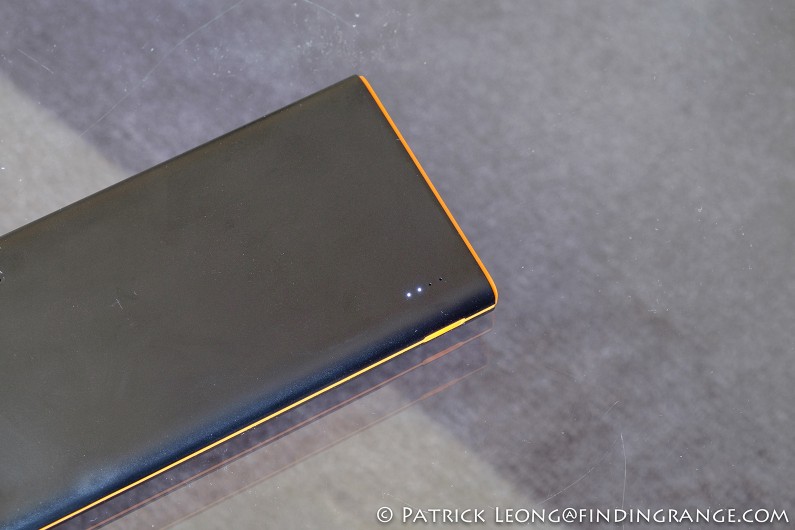 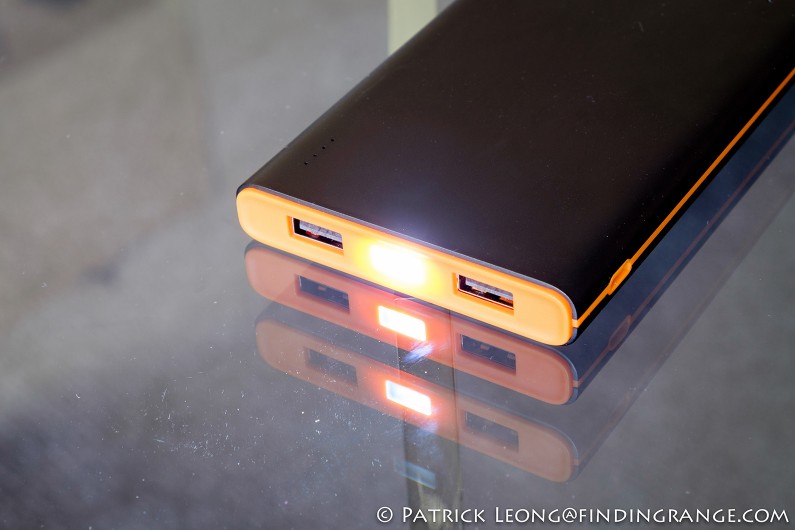 ↑ There’s even a small flashlight, which comes in handy.

In terms of included accessories, the EasyAcc power bank comes with a micro USB to USB cable for charging but you’ll still need the power adapter from your device to plug it into an outlet.  Some may want EasyAcc to include a power adapter but for around $15-22 (depending on color), the power bank is priced so well that it’s perfectly fine that it doesn’t come with its own.  So far, every power bank that I’ve tested has not come with a power adapter, and I don’t expect any of them to unless the price for each one is raised significantly.  Also, the cable isn’t as long as I would like but again, for the price, I can’t complain. 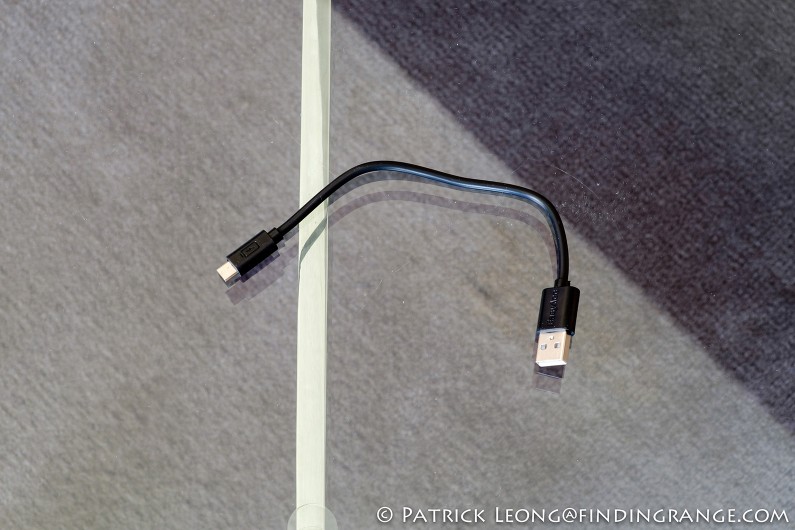 ↑ The micro USB to USB cable that is provided with the charger.

The great thing about the EasyAcc 2nd Gen 10000mAh Power Bank is it has two USB plugs, so it has the capability of charging two devices simultaneously.  The USB plugs on my sample offer a very tight connection, which I actually like a lot.  Even after numerous times of plugging my cables in and out of the power bank, the USB plugs have shown no signs of fatigue or wear. 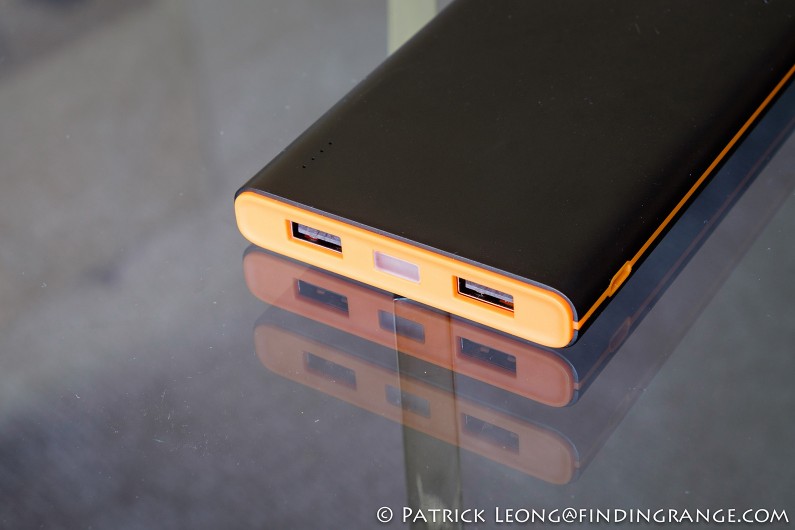 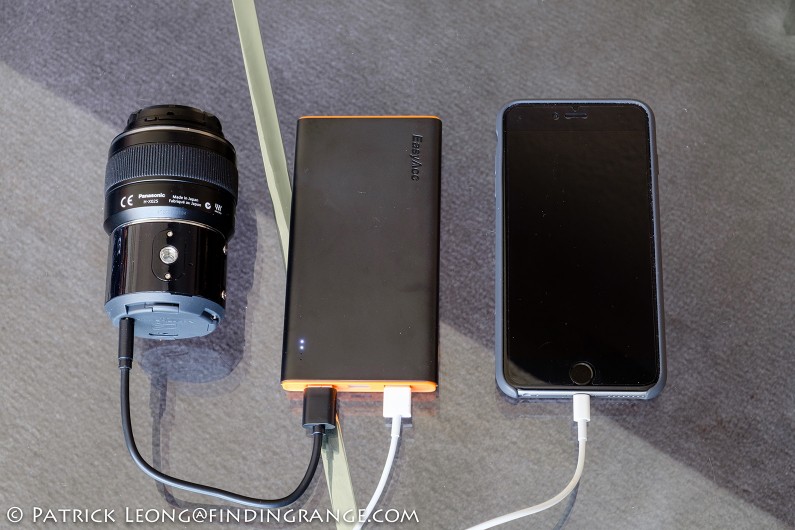 ↑ As you can see, the EasyAcc 2nd Gen 10000mAh Power Bank is currently charging an iPhone 6 Plus, and an Olympus Air.

There is also built-in Smart Technology, which means you’re getting the same charging performance for your device as you would from the original power adapter.  The power bank has the ability to identify the type of device and produce the suitable current for your device.  It also knows when to turn itself on and off.  So, you don’t necessarily even need the power button to start the charging; once you plug the device into the power bank, it starts charging automatically, and when the device is fully charged, the EasyAcc knows to turn itself off.  Lastly, the EasyAcc power bank can also charge a device while it itself is being recharged. 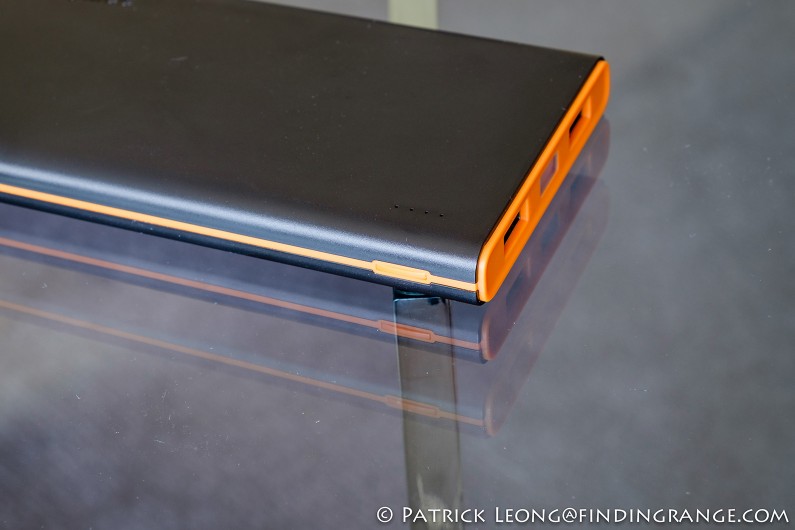 ↑ The power and flashlight button. 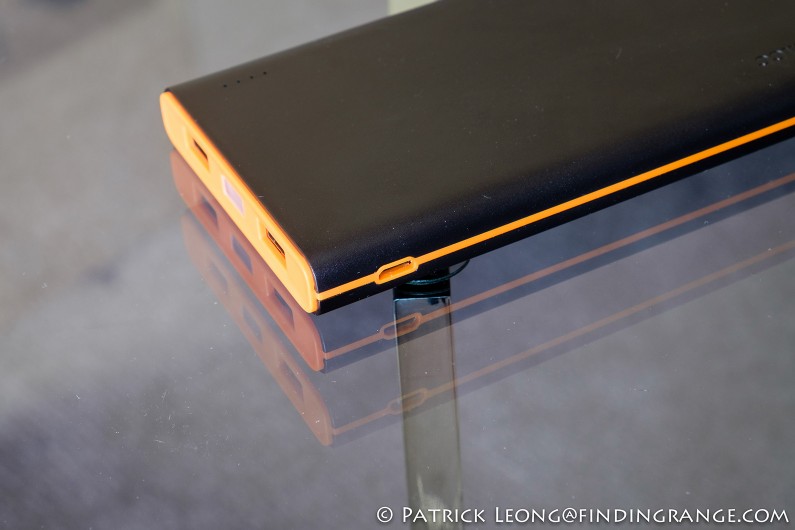 According to EasyAcc’s website, this power bank once fully charged, will charge an iPhone 6 approximately 3.5 times and a Samsung S6 2.5 times.  But I imagine that those results were concluded from ideal testing conditions.  Here are a couple of examples of my charging results from my normal daily usage.

The EasyAcc charger with a full charge charging one device:

iPhone 6 Plus with 1% power left – approximately 2 hours 25 minutes to charge it.

iPhone 6 Plus with 4% power left – approximately 2 hours 30 minutes to charge it.

iPhone 6 Plus with 4% power left – charged up to 33% and then the charger finally gave out.

It took me approximately 6 hours to recharged the power bank, which is pretty much what is stated by EasyAcc.

Later on, with the left over power in the power bank, I was able to charge my iPhone 6 Plus again with 39% power left back up to 86% before the charger ran out of power.

Keep in mind that charging times won’t be the same for everyone because different phones are running different apps, different settings, and are possibly receiving calls, texts or emails during charging.  My testing was not done in an ideal environment; I used the EasyAcc the way that I would normally use any power bank, which is what I believe is more important because none of us is going to buy a product like this to use on a test bench.  With that said, the EasyAcc 2nd Gen 10000mAh Power Bank’s specs are pretty close to my results, which is great.  Furthermore, over the past few weeks, I’ve been charging my phone for example, and all the charging times are pretty close to each other, which tells me that this charger is very consistent.

The EasyAcc also did quite good in terms of the amount of times the power bank can charge a device before it needs recharging itself.  The EasyAcc charger is supposed to charge an iPhone 6 approximately 3.5 times but I don’t have an iPhone 6; I have the Plus version, which is bigger and therefore has a larger battery, so it makes sense that I wouldn’t be able to charge that many times.  However, the amount of times the power bank could charge my iPhone 6 Plus did come very close to the Samsung S6’s rates; my battery in my iPhone 6 Plus is actually larger in capacity than the Samsung S6’s, so as you can see, it makes sense that the power bank wouldn’t quite charge my iPhone 2.5 times like it would the Samsung’s but still, it came very close.

Having a portable charger with this kind of capacity is great but it’s useless if it’s not comfortable to carry around all day.  The good news is that in addition to having decent and dependable charging results, the EasyAcc 2nd Gen 10000mAh Power Bank is actually a pretty easy portable charger to live with on a daily basis considering the battery’s 10,000mAh capacity.  If you’re looking for such a large capacity, there is no way of getting around the fact that you will be looking at fairly large power banks but EasyAcc has done an excellent job keeping their 2nd Gen 10,000mAh power bank as compact and slim as possible.  The power bank is actually slightly shorter than my iPhone 6 Plus and just a little bit thicker, which is kind of surprising in a good way.  Plus, the corners are rounded, which makes it easier to hold in combination with your smart phone in one hand. 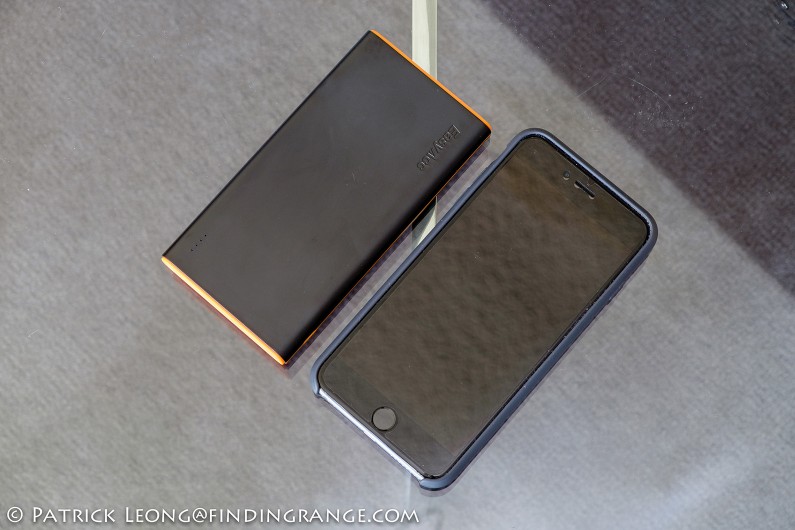 ↑ As you can see, the iPhone 6 Plus is actually a little longer than the EasyAcc 2nd Gen 10000mAh Power Bank. 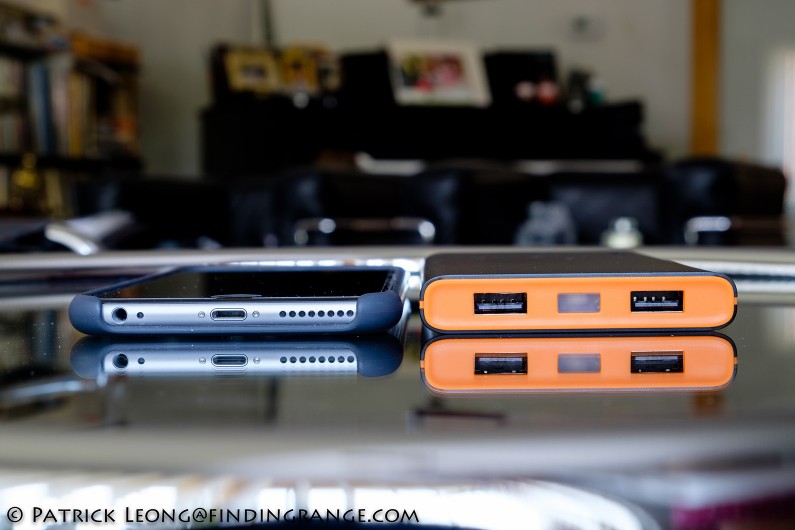 ↑ The charger is thicker than the iPhone 6 Plus but not by much.

Furthermore, since the outer shell is made out of plastic, it’s actually only the battery that really weighs anything.  The overall weight of the EasyAcc power bank is 226g, which I am very happy about because I’ve been using this power bank in the summer, and I actually had a couple of shoots that required me to carry a lot of equipment.  I want to keep things down to the essentials because of the heat, and maybe there would be only a slight weight increase if the case was metal but everything adds up.

I’m the type of person that really doesn’t like to stay in one place, and therefore, these power banks are quite useful to me.  I get sent some of these for review but I really use them.  It keeps my devices like my phone going while I’m not home.  My phone is important because it allows me to check my emails, messages, and calls that concern my photography and my blog that sometimes just can’t wait until I get home.  Nowadays, people expect you to reply rather quickly because it’s so easy.  But in addition to my phone, many other devices can also benefit from a portable charger and the list is actually growing.  For instance, as I mentioned earlier, this is a great way to keep the Olympus Air, which is a micro four thirds camera that uses your smart phone’s screen, powered throughout the day.  There’s even a fish finder called the Deeper Smart, which is essentially a sphere that you toss in the water and what it does is send the sonar readings back to your smart phone or tablet wirelessly.  You can’t connect it to a big battery but there’s a micro USB port that you can connect one of these power banks to for charging.

With all that said, I’ve had a couple of power banks that were duds but the EasyAcc 2nd Gen 10000mAh Power Bank is an excellent portable charger not only because it’s durable, built well, and performs consistently, it’s also a nice compromise in terms of it’s overall size.  With 10,000mAh, you can be sure that you can charge not only one but several devices before you actually need to recharge it yet the mAh capacity is not so large that it increases the power bank to an overall size that you simply do not want to carry around with you.  Furthermore, with a price around $15 to $22, it’s simply a steal.  Think about that for a moment: you can essentially purchase a high quality power bank with a 10,000mAH capacity that’s also easy to carry for around $15.  You simply can not go wrong if you ask me.

Thank you for taking the time to read my review!  If you want more info about power bank, please go to EasyAcc’s 10000mAh Power Bank page on their official site.