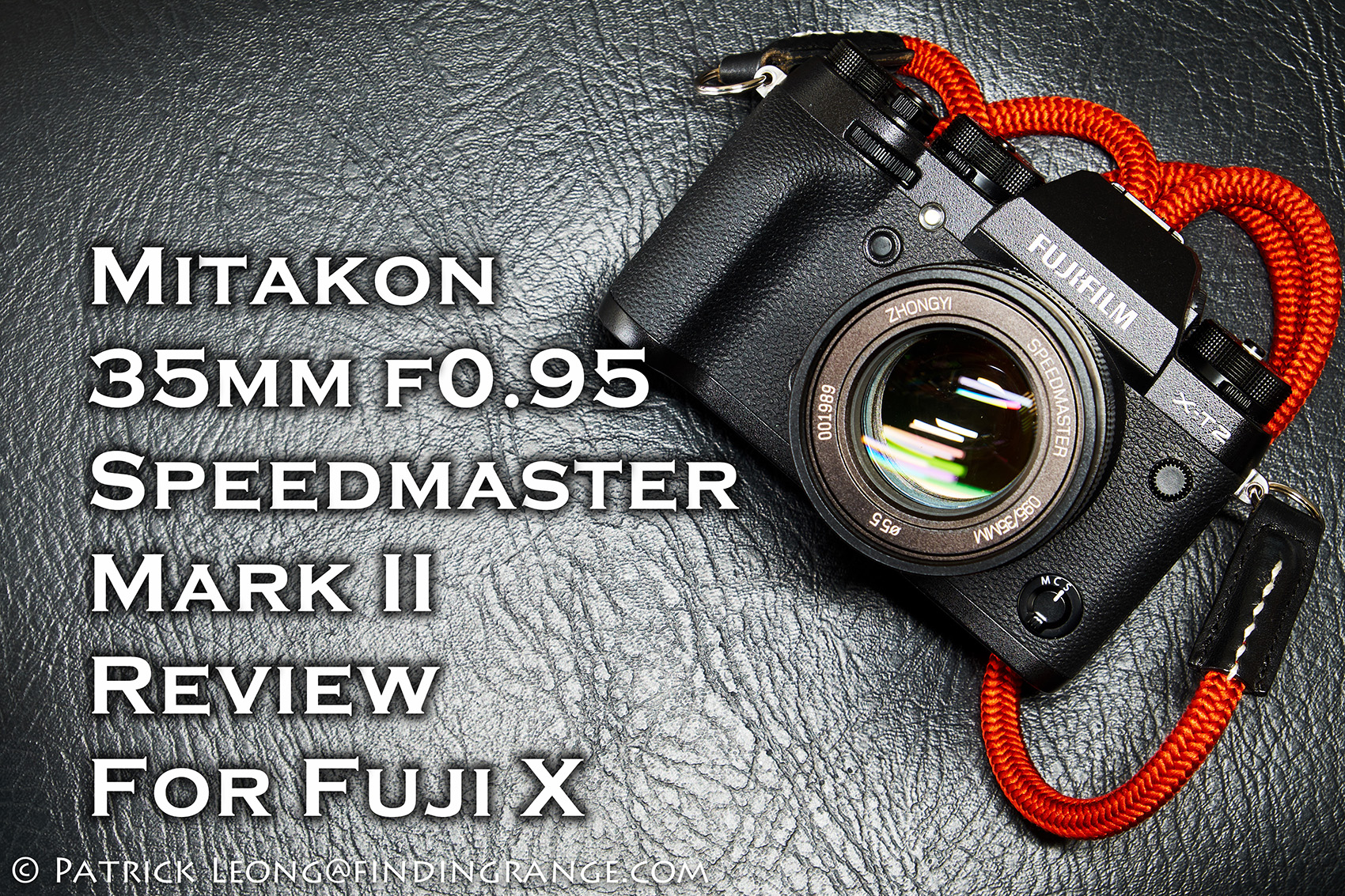 If you’re looking for a 50mm equivalent focal length for your Fuji X Series body, there are two excellent choices from Fuji’s own catalogue of lenses: an f2 version and a f1.4 version.  I reviewed both, and ended up even buying the f1.4 version.  But let’s say you want something a little faster with arguably a more unique draw and rendering.  Where do you turn to?  Well, how about the Mitakon 35mm f0.95 Speedmaster Mark II?  Yes folks, you read that right.  This lens has a maximum aperture of f0.95.  While it’s a third party lens, it doesn’t need an adapter because it comes in X mount.  It’s also priced pretty competitively, I might add.  At $599, it’s basically the same price as Fuji’s own f1.4 version.  So, let’s take a closer look.

I have to say, for $599, there was a small part of me that was wondering whether this little lens was really worth it.  Don’t forget, it has a maximum aperture of f0.95, and as we all know, more speed usually equates to more cost.  But I have to say, I’m quite impressed with the Mitakon 35mm f0.95, especially with the overall build.  At least with this copy, the build quality is quite good.  It feels very solid and well-put together.  I don’t see any defects whatsoever.  The focus ring is ultra smooth, and it feels very mechanical making it an absolute pleasure to focus manually.  The focus ring also has just enough resistance to help with precise focusing.  The Mitakon 35mm f0.95 Speedmaster Mark II has a de-clicked aperture ring, which is also very smooth.  However, I would’ve preferred a clicking aperture ring.  I would imagine that most will be using this lens quite a lot at f0.95, and I found that sometimes it would move out of that setting slightly. 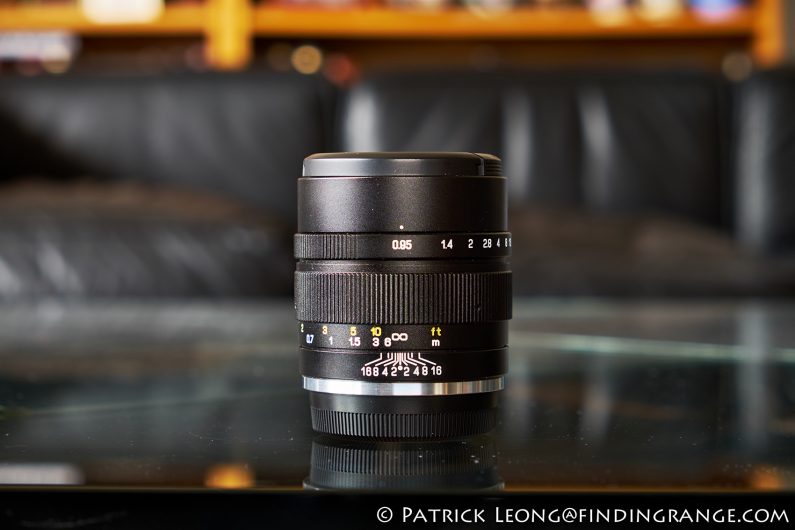 Other than that small issue though, I really can’t complain.  The Mitakon 35mm f0.95 feels absolutely great in the hands.  Quite honestly, it feels like a typical rangefinder lens, and better than the price suggests.  I seriously was not expecting to feel this way about it.  It comes in black or silver.  It’s around the size of my XF 35mm f1.4 but it feels so much more solid and dense.  It definitely does not have that hollow feel of my XF 35mm f1.4.  It weighs 460 g but this lens is made out of solid metal and glass.  Some have asked me if the Mitakon is front heavy, and my answer is that it’s really not that bad at all.  While the lens weighs more than both Fuji counterparts, it’s still short in length, so the camera still feels very balanced.  In fact, the extra weight was welcome, at least for me.  Sometimes I feel like my XF 35mm f1.4 is a little too light; in the case of the Mitakon 35mm f0.95, the extra weight makes it easier for me to hand hold, especially in low light situations. 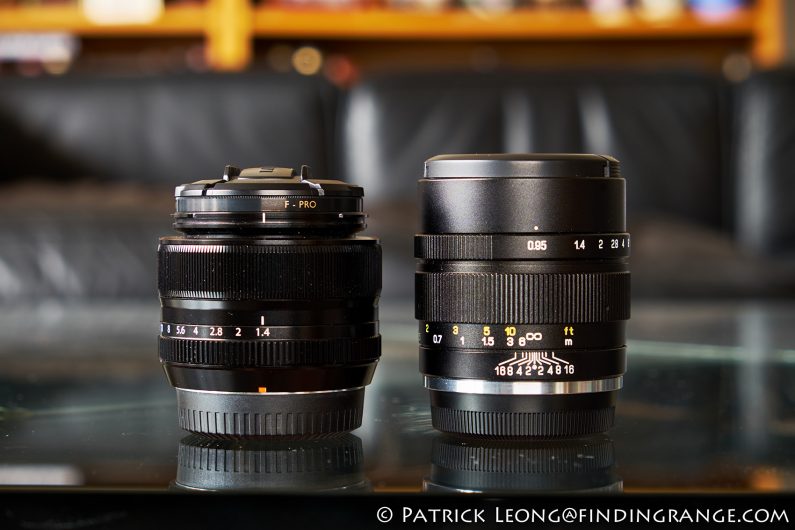 The only thing that I feel would benefit the Mitakon 35mm f0.95 Speedmaster Mark II is a decent lens hood.  A built in sliding one that locks in place similar to the Leica 50mm Summilux ASPH would be awesome but I have a feeling that would bump up the price quite a bit.  I would therefore be happy with a simple clip on one.  I found that this lens does flare, which I will talk more about later. 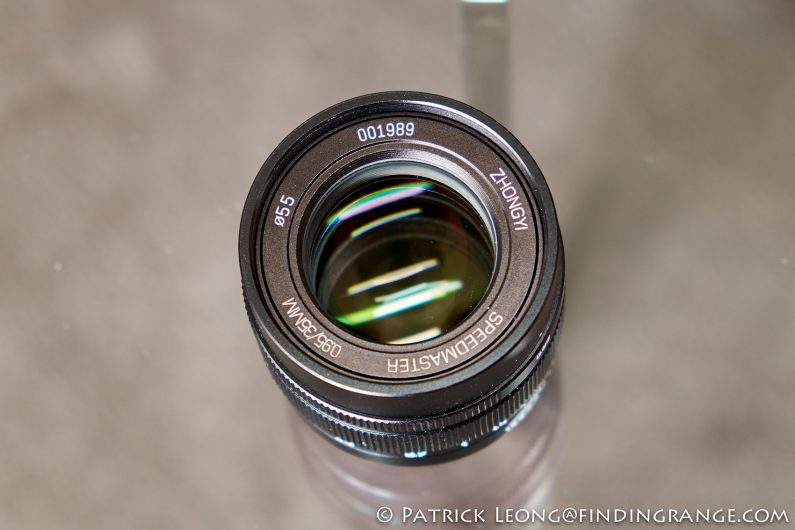 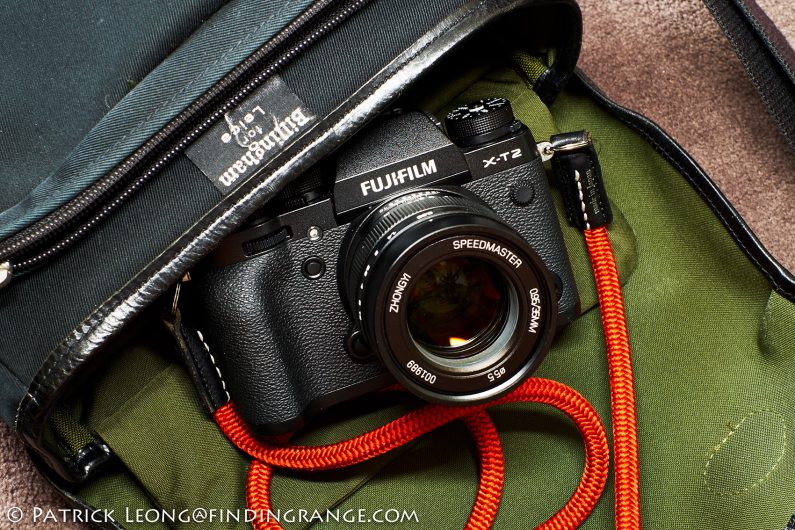 Now, let’s talk about the image quality.  I’m sure there are some out there that believe the image quality can’t be that good from a f0.95 lens costing just $599 but I found the exact opposite to be the case.  Overall, this lens produces images with such beautiful color and pop.  Things have a real depth to them in the photos making them look real.  The Mitakon 35mm f0.95 Speedmaster Mark II seriously impressed me.  Of course, shooting at f0.95 is probably the reason most will buy this lens, and they will definitely not be disappointed by the performance at this insane speed. 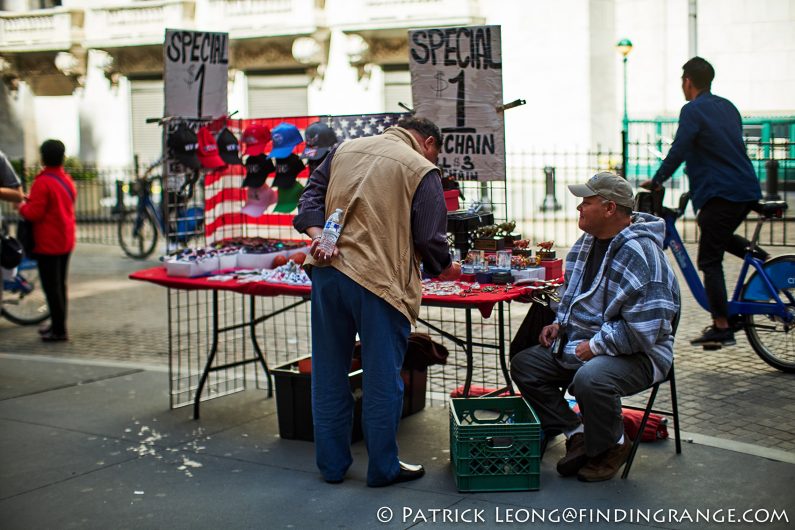 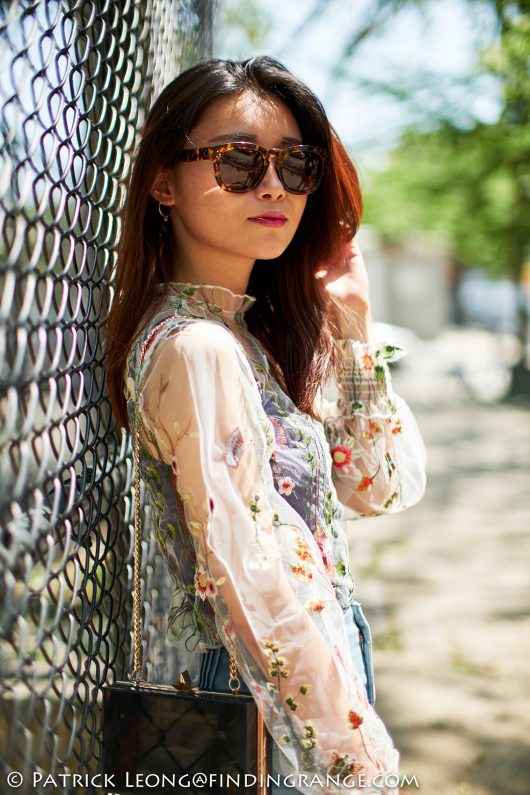 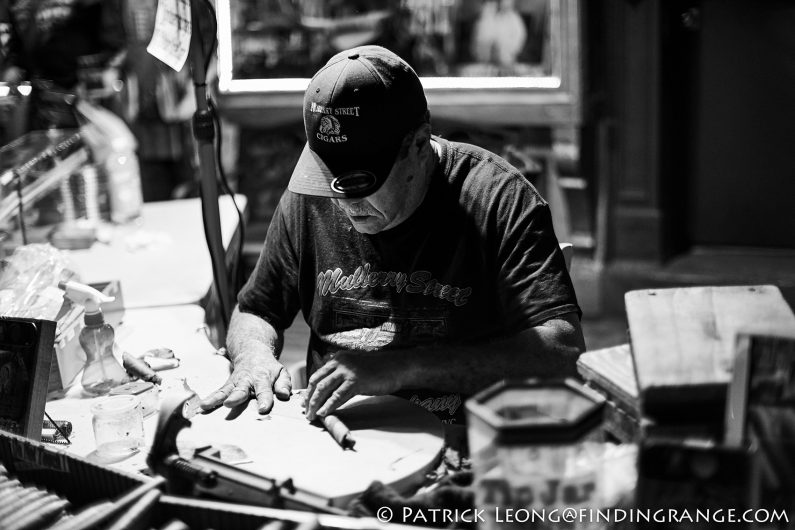 The Mitakon 35mm f0.95 is tack sharp in the center when shooting at f0.95.  Again, I was mighty impressed when I first tried it out, and I have to say, obtaining these results consistently isn’t all that hard because the Mitakon 35mm f0.95 is not as difficult to focus as the f0.95 aperture may suggest.  I didn’t find the focus throw that long, so I was able to quickly focus, and with focus peaking on, I didn’t have any issues focusing in all types of conditions.  In fact, I would say it was relatively easy to focus for a manual lens.  I didn’t even have to magnify the image in my EVF. 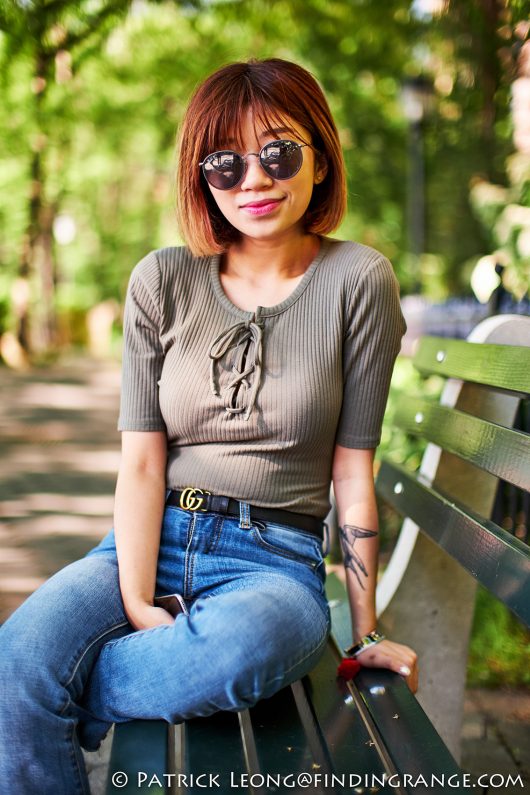 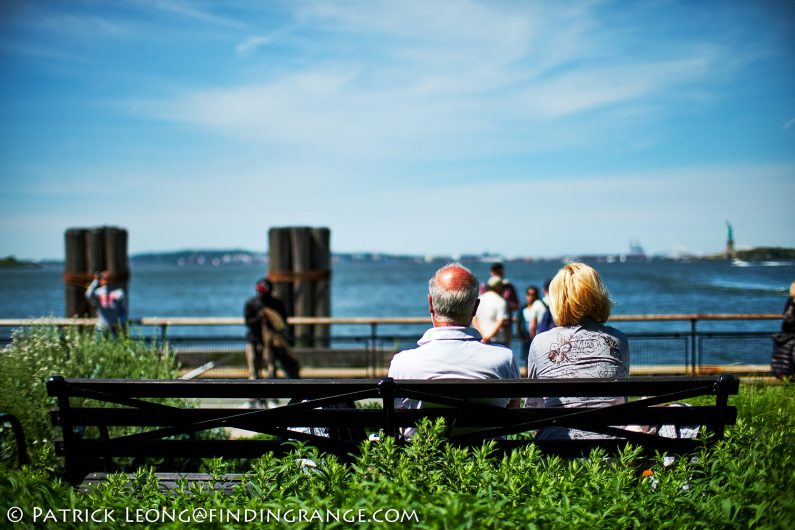 ↑ Here’s another at f0.95.  Notice the vignetting at this aperture.  However, I like it. 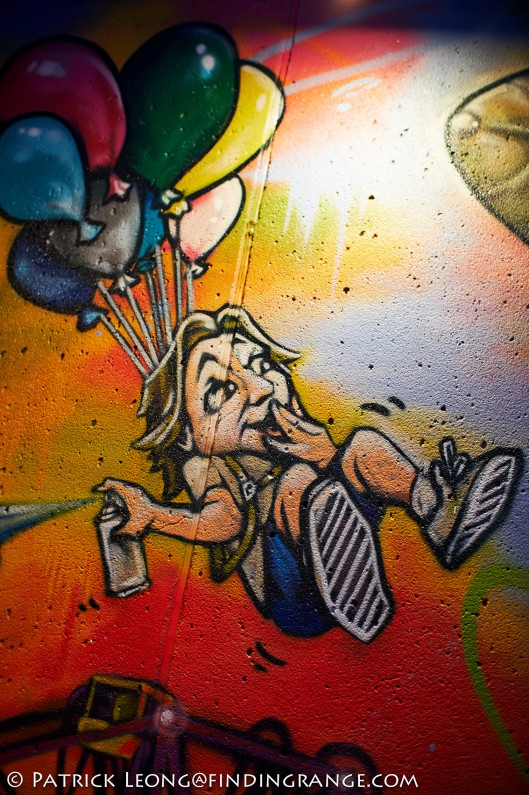 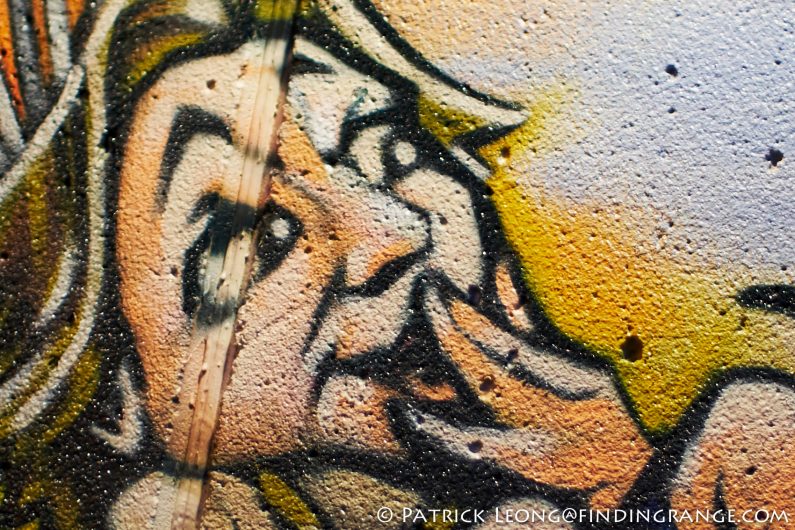 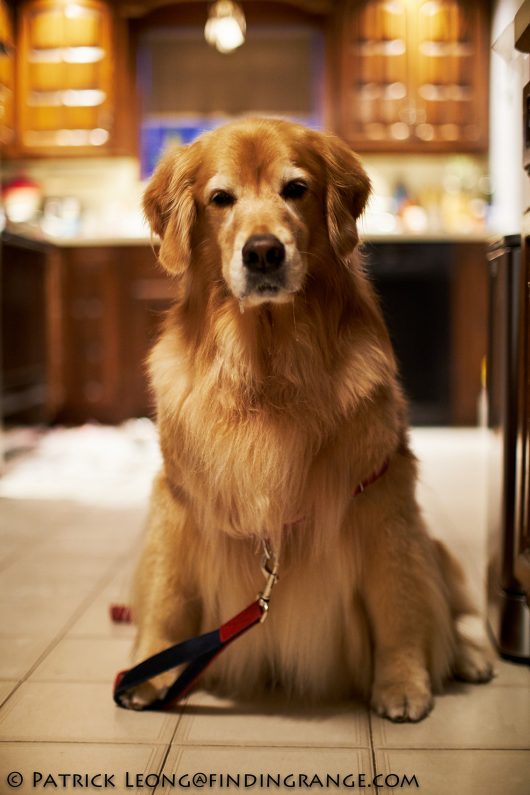 ↑ I was a little off here focusing wise because Kopi didn’t want to stand still :).  Taken at f0.95. 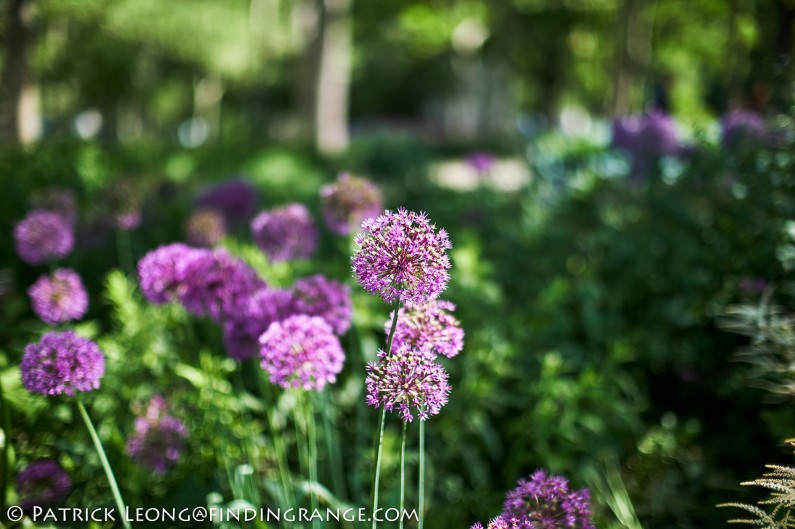 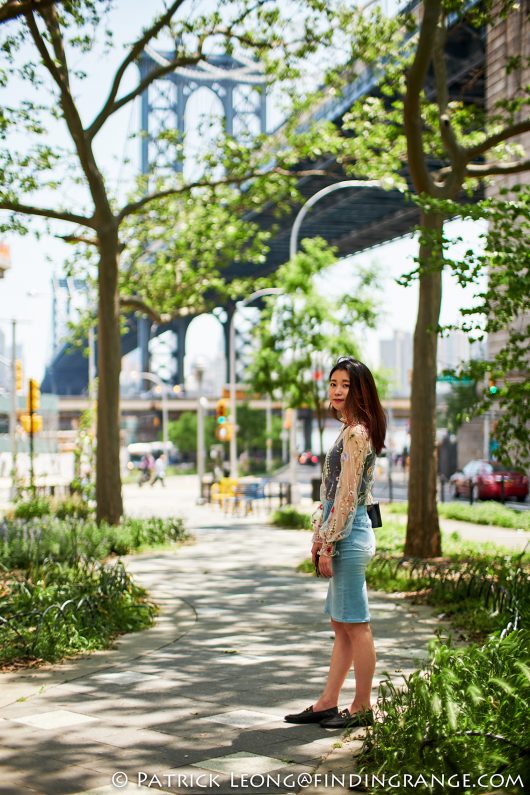 ↑ The depth of field is still pretty shallow from a further distance.  Taken at f0.95.

Either way, the results at f0.95  look spectacular to say the least.  I feel the imperfections, if you would even call them that, only add to the images in this case.  Plus, the bokeh is insanely good!!!  It’s buttery smooth rendering truly makes images taken at f0.95 unique and breathtaking.  It’s pretty amazing what you can blur away.  No matter what the background is, nothing looks harsh, at least to my eyes.  Quite frankly, the combination of the smooth rendering along with the ease of focusing make the Mitakon 35mm f0.95 Speedmaster Mark II plain out addictive to use at f0.95.  Look how many examples of photos taken at f0.95 I ended up in this review :)!  Frequent visitors of my site know that I don’t shoot everything at maximum aperture but in this case, I simply couldn’t get enough of it!  It didn’t seem like it mattered what was in the background; it simply melted away. 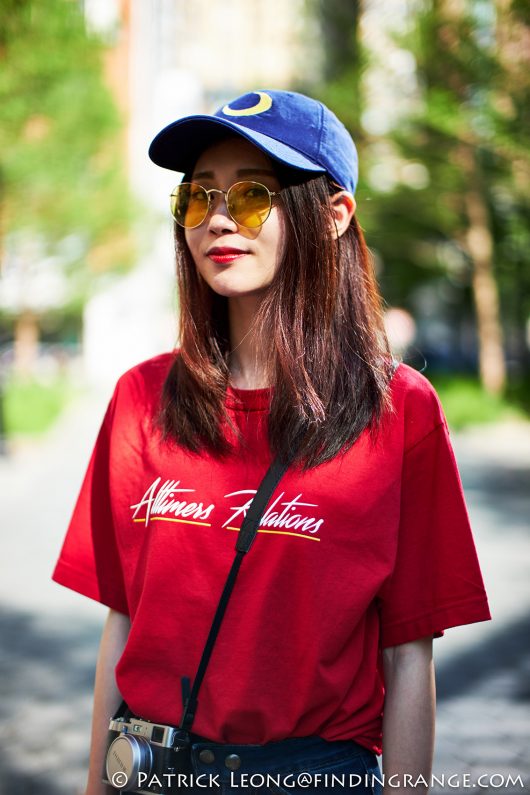 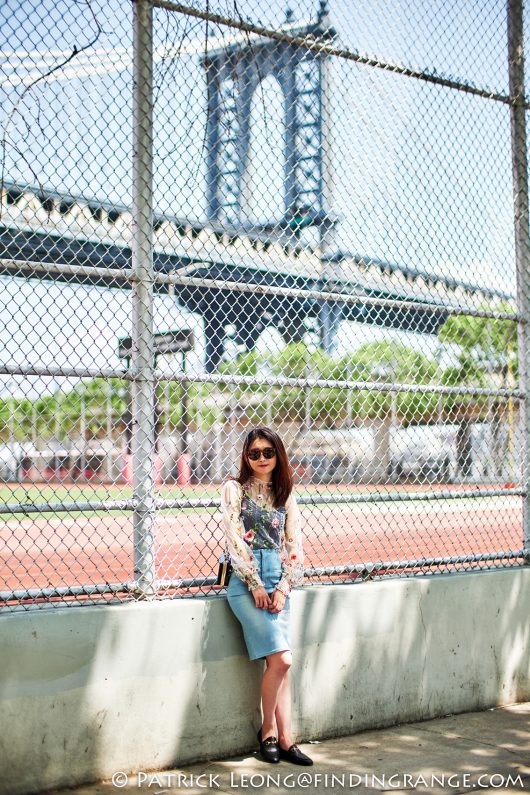 ↑ Even from a further distance, and with a background that is a little more complicated, the lens still produces a very smooth rendering. 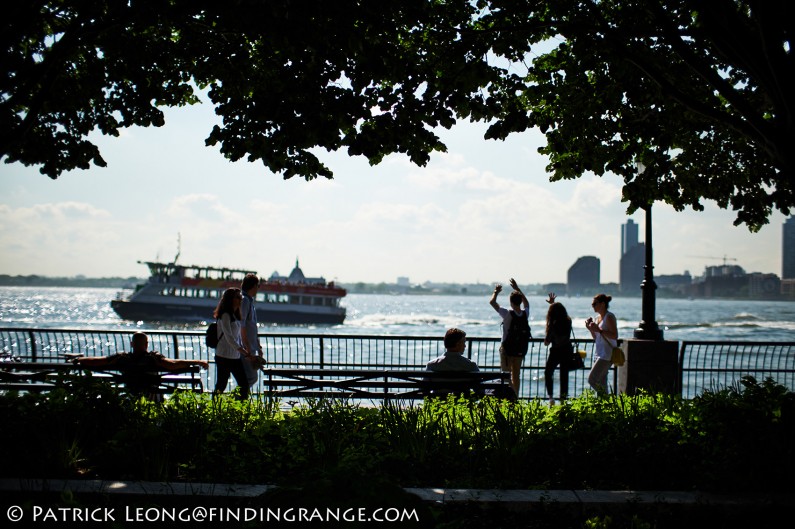 But the f0.95 maximum aperture isn’t the Mitakon 35mm’s only trick.  It isn’t just one of those specialty lenses that you use only for one purpose, which in this case is to shoot at f0.95.  This is a lens that you can use throughout the aperture range, and achieve excellent results.  It’s seriously good enough that I feel you can use it as an everyday lens just like you would with the Fuji XF 35mm f1.4 or the f2 version.  All three of these lenses may not be equal in all areas because each one has their own strengths, and weaknesses but the excellent sharpness throughout the aperture range, the beautiful color rendering, the contrast, and of course, the awesome bokeh of the Mitakon 35mm f0.95 really puts it in the same league as its Fuji counterparts.  I’ve been shooting with the XF 35mm f1.4 since it was released with the X-Pro1, and while I love that lens, if I was just left with the Mitakon, I would be perfectly happy with it. 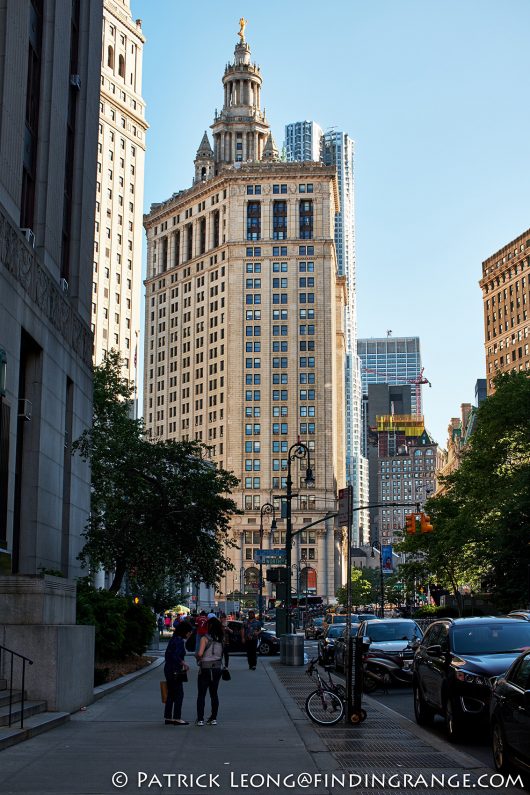 ↑ I shot most of my images wide open because I figured most will want to see plenty of examples at f0.95.  However, this lens performs very well at other apertures as well.  This was taken at f8. 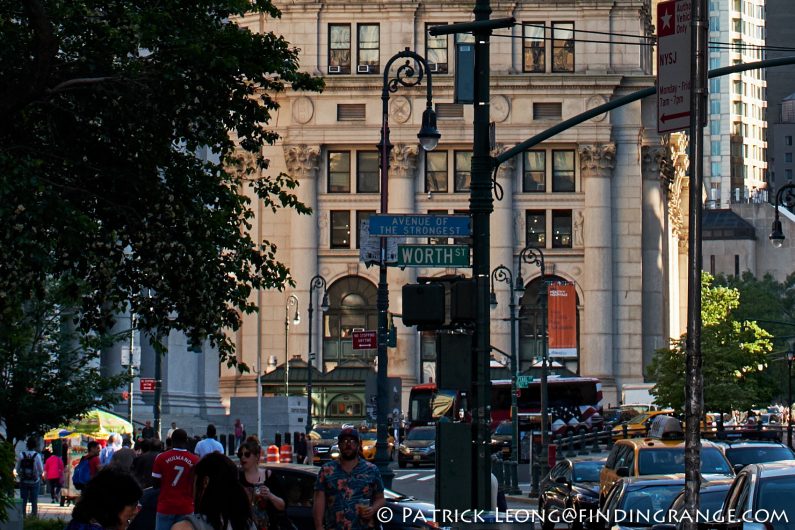 ↑ This is a 100% crop of the photo above.  Notice the signs in this photo.  They pretty far distance wise in the photo but they are very sharp.

Usually size is an issue with fast lenses, which make them difficult to use as an everyday lens.  For example, a Leica Noctilux can be used as an everyday lens because the optics are definitely up to par but it’s huge when you compare it to something like a 50mm Summicron or even a 50mm Summilux.  In this case, the optics are not only good enough, the Mitakon 35mm f0.95 Speedmaster Mark II is around the same size as the XF 35mm f1.4, which is not a big lens at all.  The only thing it lacks is autofocus, but if autofocus isn’t a necessity for you, the Mitakon might be a great choice to consider as just your only 50mm equivalent. 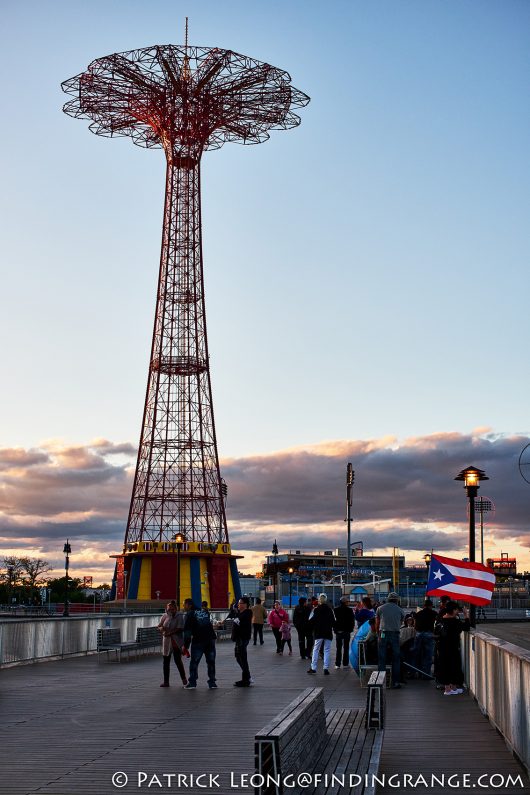 As you can probably tell, I’m a big fan of this lens.  The only thing that I noticed is it flares more easily than both of the Fuji 50mm equivalent lenses.  Here’s an example.  I was in Coney Island one night just taking pictures of some of the lighted signs at the amusement rides, and noticed flare in a couple of pictures that wouldn’t normally be a problem for say my XF 35mm f1.4.  But the flare isn’t a deal breaker in any way because it’s not horrible or anything like that.  As you can see from my photos in this review, there isn’t flare in any of them because it definitely does not flare all the time.  It’s just something I wanted to mention because this is a review. 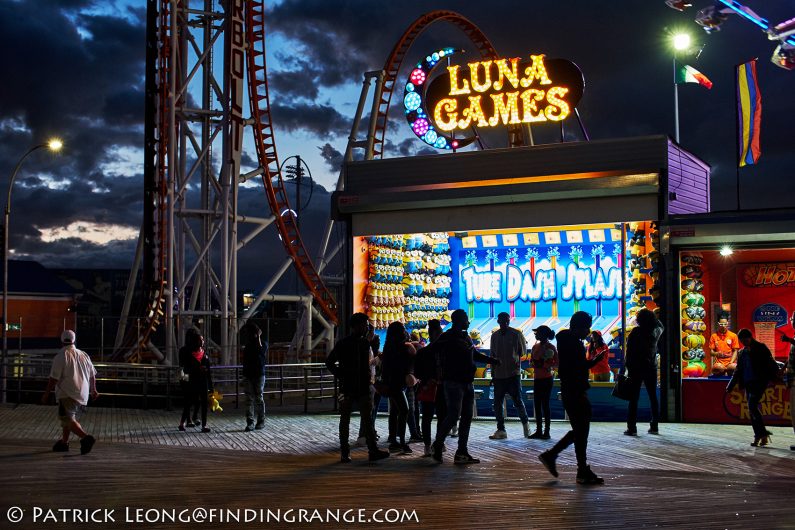 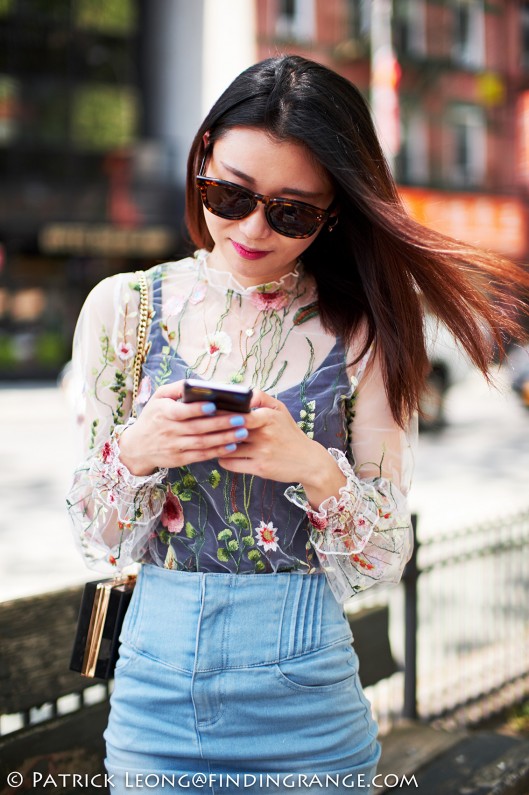 ↑ Here’s one more taken at f0.95.  Notice how the buildings in the background simply melt away. 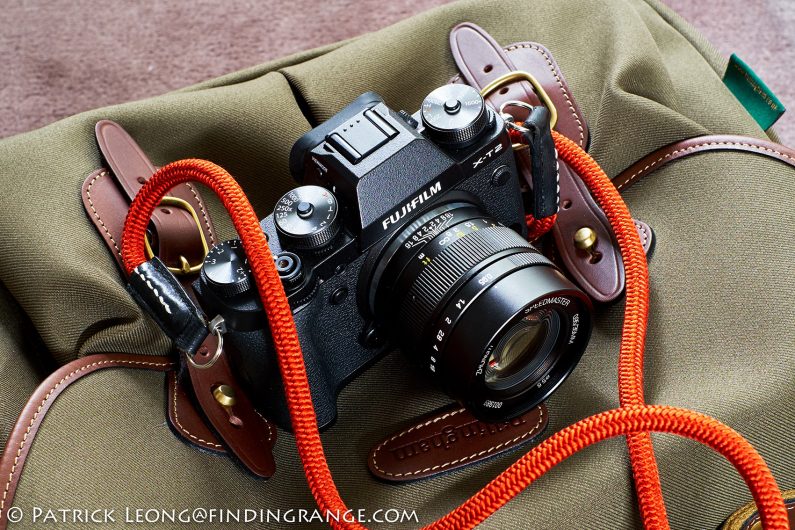 Overall, the Mitakon 35mm f0.95 Speedmaster Mark II is a cool little lens that quite frankly, blew away my expectations.  It’s nicely built, it’s solid, and has a very mechanical feel to it that makes it a joy to use.  In addition, you have that awesome f0.95 aperture, which produces some killer bokeh.  It’s also worth mentioning that it’s just plain awesome to be able to shoot at a much lower ISO than I normally do at night.  To top it off, the Mitakon isn’t just small enough to be used as an everyday lens, it has the overall optical quality to be used in that way as well.  At $599, I personally feel you’re getting a great deal here.  If you’re looking for a 50mm equivalent for your Fuji X Series camera, and you want something that is really fun to use, and can produce some truly unique photos, the Mitakon 35mm f0.95 Mark II is an absolutely fantastic lens to consider.  I love it, and quite honestly, I was sad to see it go when I was done reviewing it.

Thanks for taking the time to read my review!  If you’re considering purchasing the Mitakon 35mm f0.95 Mark II, and my review helped you decide, please help support this site by purchasing from any of the links in this review.  It will not cost you anything extra.  Thank you for your support!