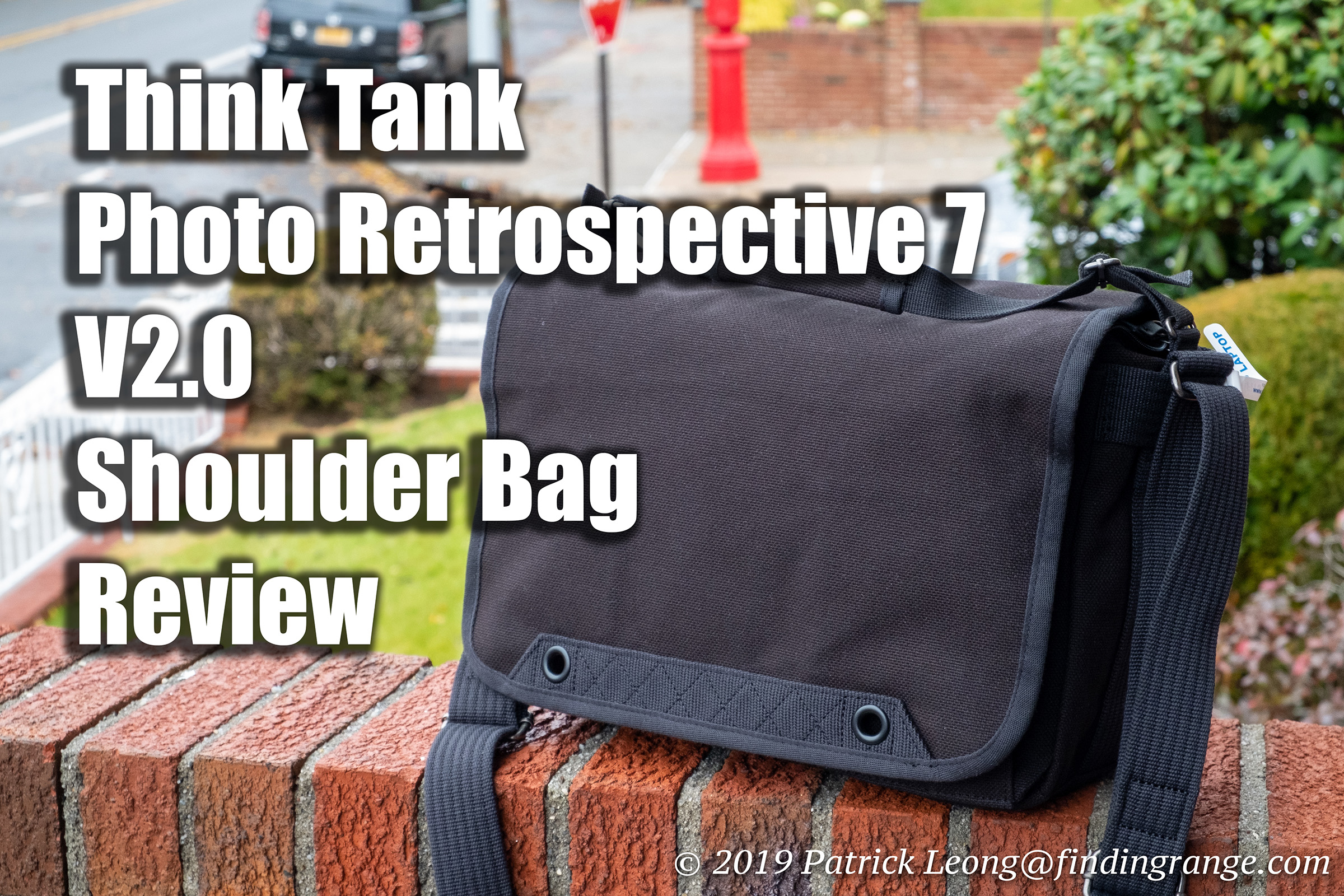 I think getting a shoulder bag that really fits you is quite important.  We all have different needs and tastes but the good news is there are tons of great camera bags out there these days.  One major manufacturer in the camera bag world is Think Tank, and today I’ll be talking about the Photo Retrospective 7 V2.0.  The 7 is a medium size bag that should appeal to quite a lot of people because it can fit a variety of gear from a compact mirrorless system to a larger DSLR system.  Let’s take a closer look.

When it comes to a camera bag, I’m always very particular about the overall quality, and how it’s made.  That’s because if you think about it, the bag’s job is basically to protect your expensive camera gear from the outside world.  After using the Photo Retrospective 7 V2.0, I can tell you that it’s a bag that is definitely well made. 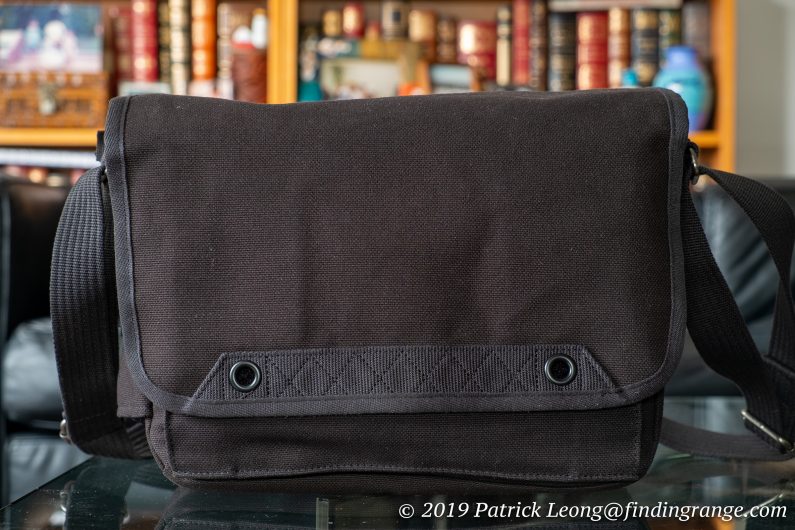 There’s no signs of inferior craftsmanship here.  For example, there’s actually a lot of stitch work on this bag because of the many pockets, and compartments; all of it is excellent.  There aren’t any signs of loose threading.  The materials used to make the bag, like the outer canvas, are high quality, and tough.  Everything here appears to be designed to hold up to longterm use yet at the same time, you can tell that the comfort of the photographer is still a main concern.  The tough canvas material, for instance, is still very flexible and rather soft.  The Retrospective 7 v2.0 has all the comforts you would expect from a decent canvas bag.  You can also get the Retrospective 7 V2.0 in either black or pinestone. 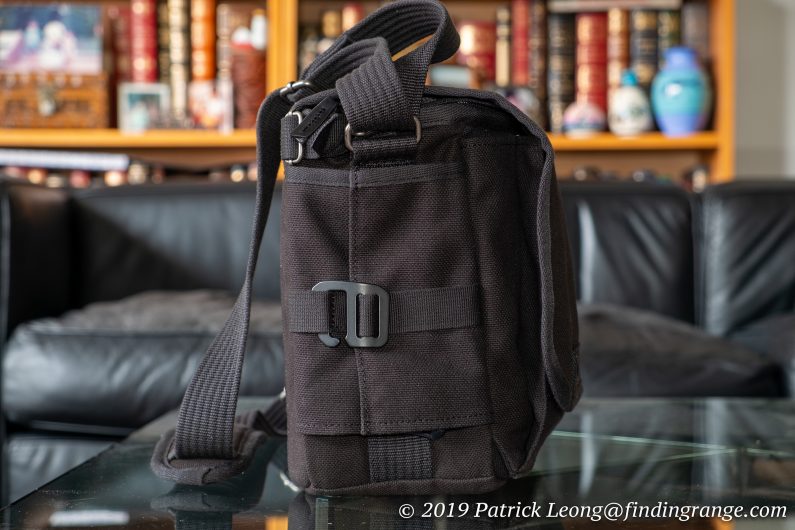 Appearance wise, the Photo Retrospective 7 V2.0 definitely goes for the low-key, discreet look.  In this way, it kind of reminds me of Domke bags.  There’s not even a name tag on the front of the bag.  There’s nothing wrong with any of this, of course.  The outside looks pretty much like any other generic bag that you would find someone carrying on the street, which is the whole point of the design.  This is a bag made for the type of photographer that just wants to blend in with the surroundings.  It’s a beautifully made bag but at the same time, it doesn’t scream, “I’m carrying thousands of dollars worth of photographic gear”.  But while the outside looks pretty unassuming, the inside is a different story.

The truth is, there is just so much going on inside the bag in a good way, of course, but let’s first start by talking about the main flap.  To access the Photo Retrospective 7 V2.0, you have to lift the flap, which is held in place by velcro.  It’s pretty sticky velcro, which is good because it’s a secure way to keep the flap closed.  However, the velcro will make a lot of noise, so Think Tank installed sound silencers, if you choose to use them.  The silencers have also been improved on this version of the bag versus the older one because now, you don’t actually have to peel velcro to access the silencers.  Overall, velcro silencers are a great idea but in my opinion, I think some sort of clip would’ve just been a better option.  Then you wouldn’t even need silencers, and at the same time, you could secure the flap without making any noise.  But this isn’t a huge issue, and it’s really just a design they prefer, and the direction they want to go rather than a mistake. 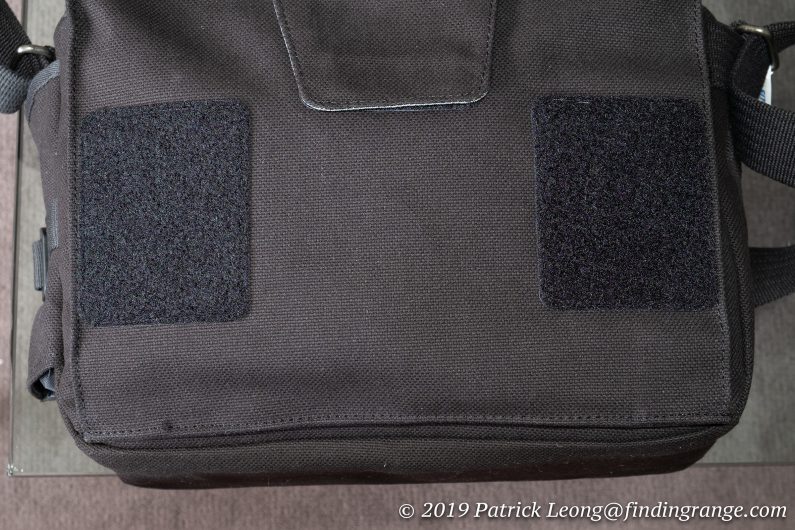 ↑ The Retrospective 7 V2.0 has two big patches of sticky velcro that hold the main flap in place. 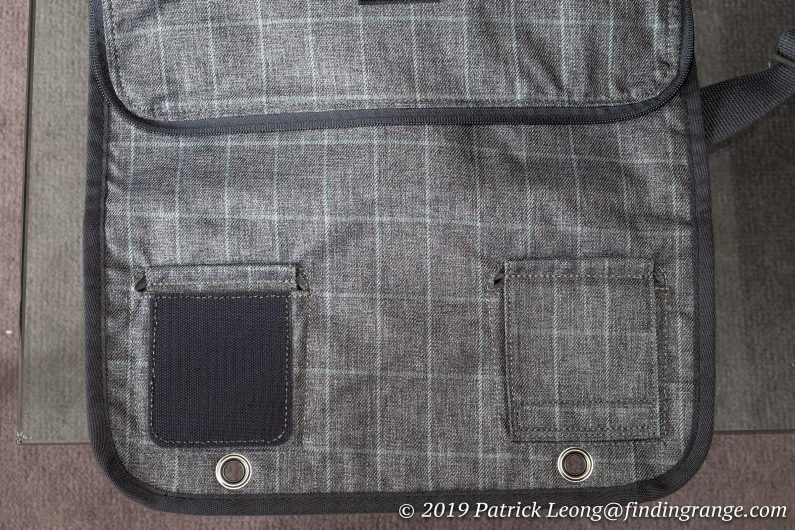 ↑ Left is the velcro exposed, and on the right, you can see that the sound silencer is employed.

Once you open the main flap, there’s actually another cover for the main compartment of the Retrospective 7 V2.0.  This cover has a zipper that goes around the entire main compartment, so if you’re just transporting gear, and you don’t necessarily need quick access, you can zip this cover up for even more protection.  However, let’s just say you’re out shooting, and you do need quick and easy access.  Well, you can leave this cover unzipped, and because of the velcro patch on top of the cover, every time you lift the main flap, the cover goes up with it.  In addition, you can also slip the cover into a slot inside the main flap instead. 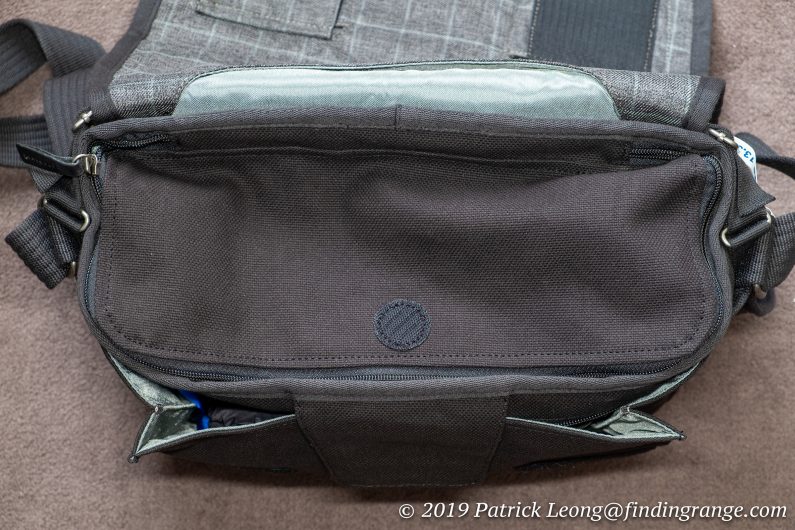 ↑ The Retrospective 7 V2.0 has an additional cover that can be zippered closed. 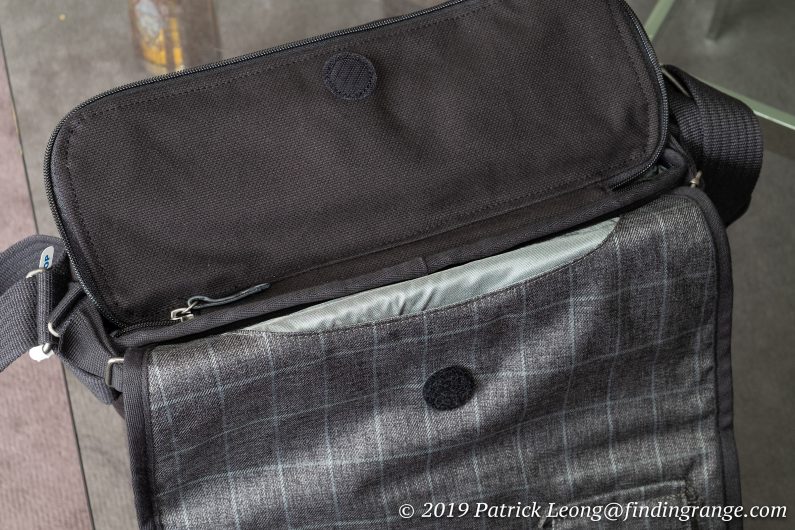 ↑ There’s a velcro patch on top of the zippered top that will attach the the main flap. 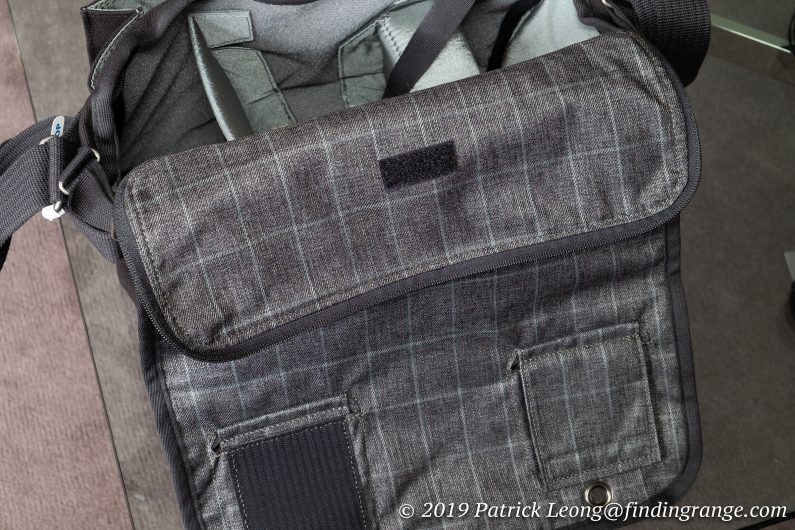 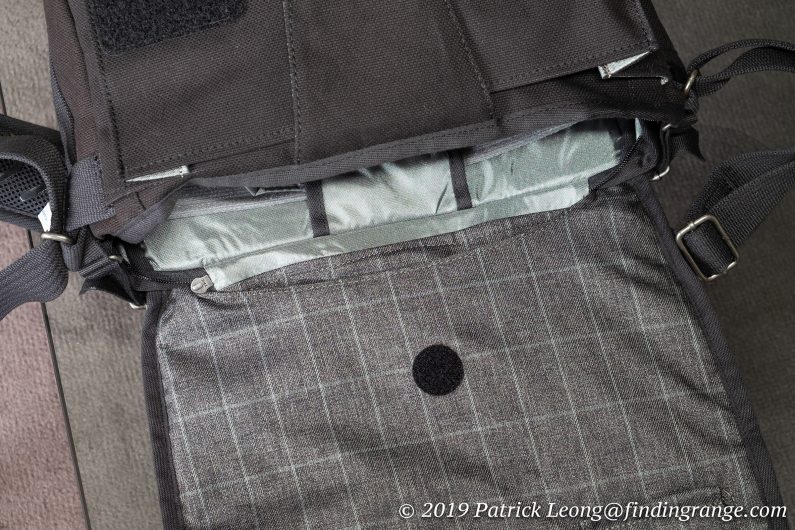 ↑ You can also slide the zippered top into the main flap as pictured here.

So, after opening the main flap, you have access to all the little compartments inside.  If you’re a photographer that likes a lot of pockets, you’ll love the Photo Retrospective 7 V2.0 because there are tons in this bag.  Truthfully, I’m pretty impressed by the amount of pockets that aren’t just for bragging rights but actually provide meaningful storage space all while not making the bag’s overall size that much bigger.  The front pocket divides into two big pockets, which also have their own little slots and compartments for various miscellaneous items, such as, pens or cards.  There is even a zippered pocket here as well, so I guess if you include that, it’s technically three big pockets. 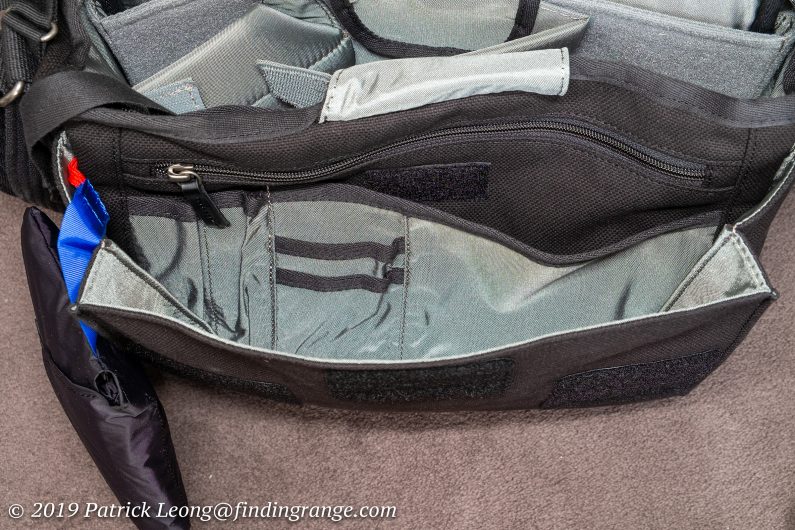 ↑ The Retrospective 7 v2.0 has plenty of different pockets and compartments. 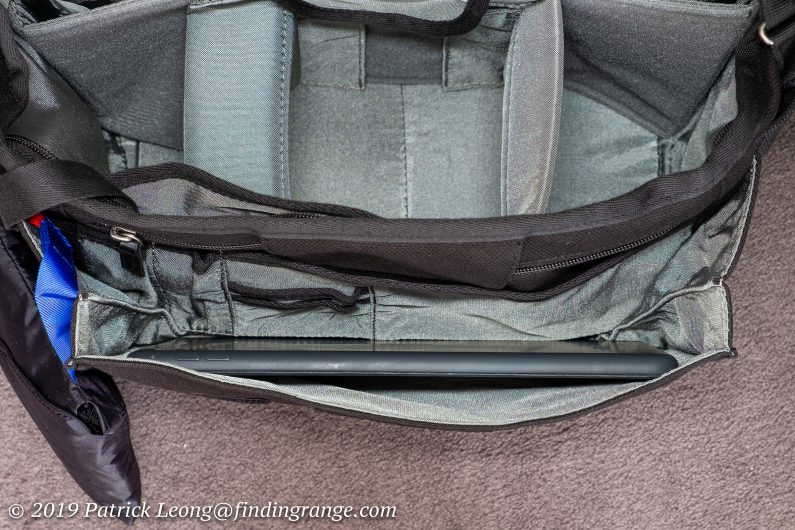 ↑ Here’s another view of the front pockets with my iPad Pro 9.7″.

Inside the main compartment where you hold your camera and lenses, you have a pocket in front.  There’s plenty of room in it as well, and there’s some sort of key holder there too.  There’s also a slot designed to hold a 13.3″ laptop near the back. 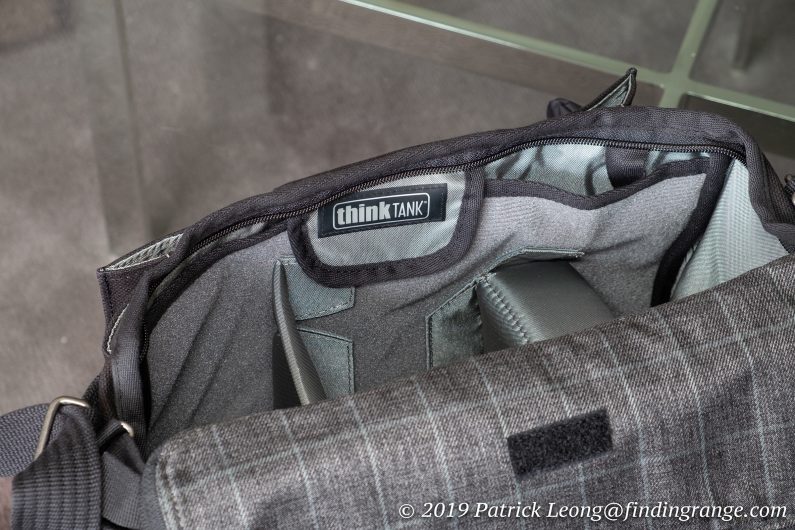 ↑ There’s another big pocket inside the bag as well. 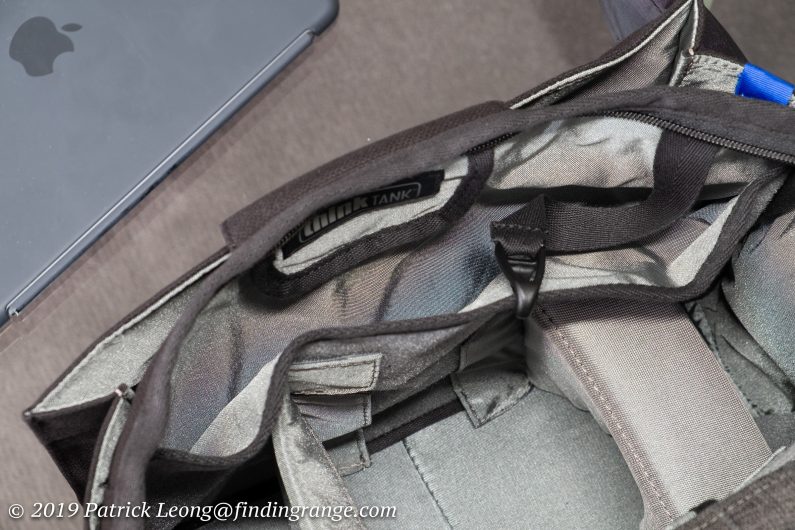 ↑ Here’s another view of that pocket.  As you can see, there’s also some sort of key holder as well. 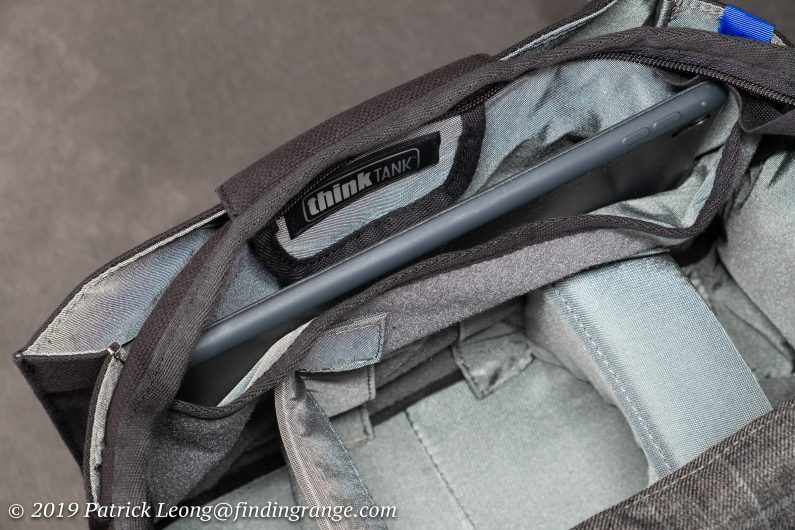 Since we’re talking about all the pockets, there is also a zippered one on the back of the bag.  You can fit an iPad in it.  In addition, there is also a luggage handle pass-through on the back, which is great for travel.  On the side of the Photo Retrospective 7 V2.0, there’s an adjustable pocket that will fit a water bottle as well, which I think is really cool.  I can’t believe we don’t see this more often in bags.  There are so many times when I’m carrying a bottle of water during the summer, and I have no where to put it. 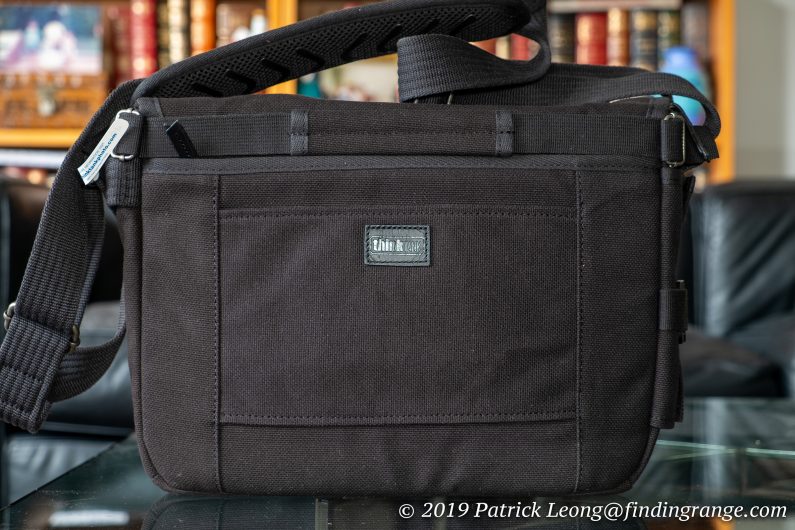 ↑ On the back of the Retrospective 7 v2.0, there’s a zippered pocket, and a luggage handle pass-through. 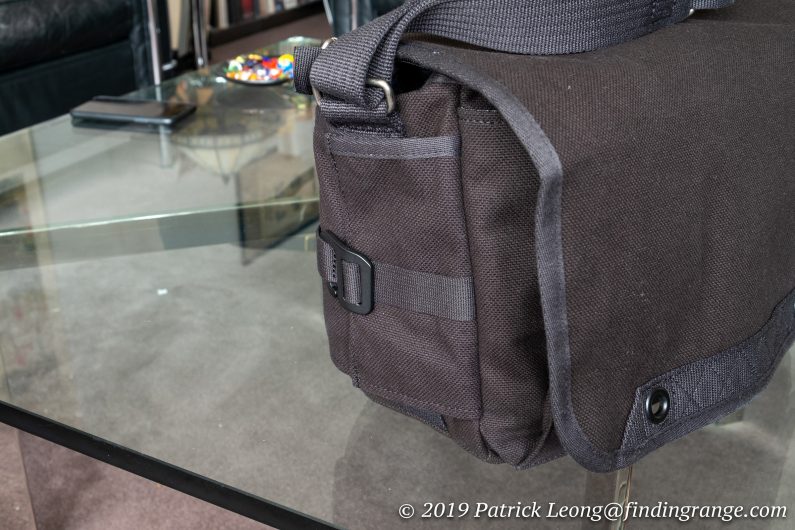 ↑ I think this was really cool: there’s a side pocket for a water bottle. 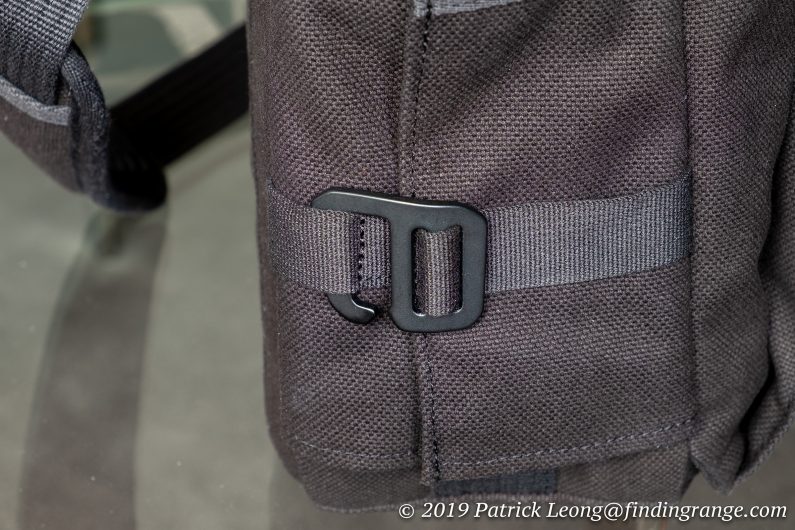 ↑ The side pocket is held closed by a clip, and some velcro. 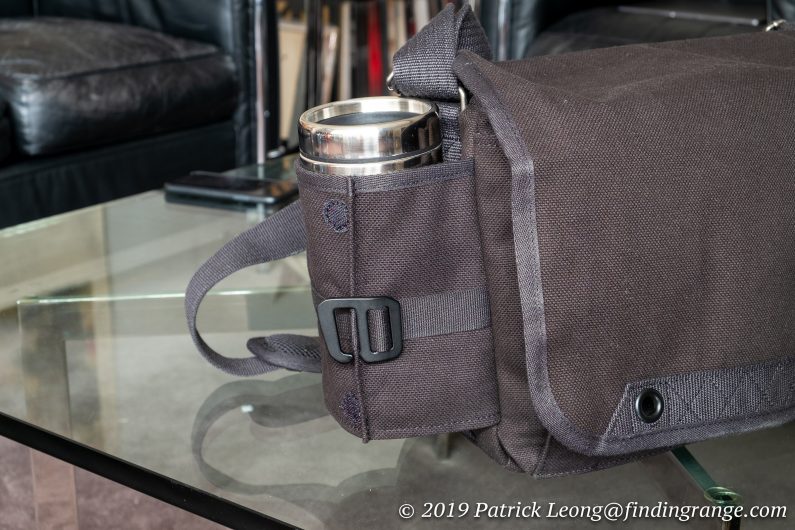 ↑ Here’s a photo with a mug in the side pocket.

Now, that we talked about the various compartments in the Retrospective 7 V2.0, let’s talk about the padding in this bag, which by the way, is excellent.  The padded dividers are also superb.  You can pretty much attach them everywhere inside the bag. 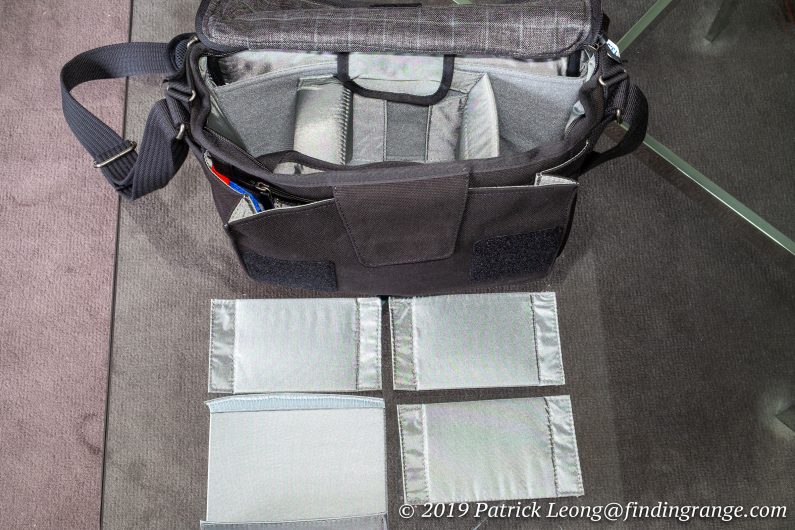 ↑ The Photo Retrospective 7 v2.0 comes with several different dividers.  Don’t forget the two that are already in the bag.

What Will Fit in The Think Tank Photo Retrospective 7 V2.0 Shoulder Bag:

So, let’s talk about what will actually fit in the Photo Retrospective 7 V2.0.  As I said earlier, this is a medium size bag, so it’s very versatile in terms of what it will fit.  You can go either mirrorless or DSLR with this bag.  The gear I used was all mirrorless but for the photos below, I made sure that the mirrorless systems were vastly different.  The first photo, for example, is with my Fuji X-T3.  The second one has my Leica SL2. 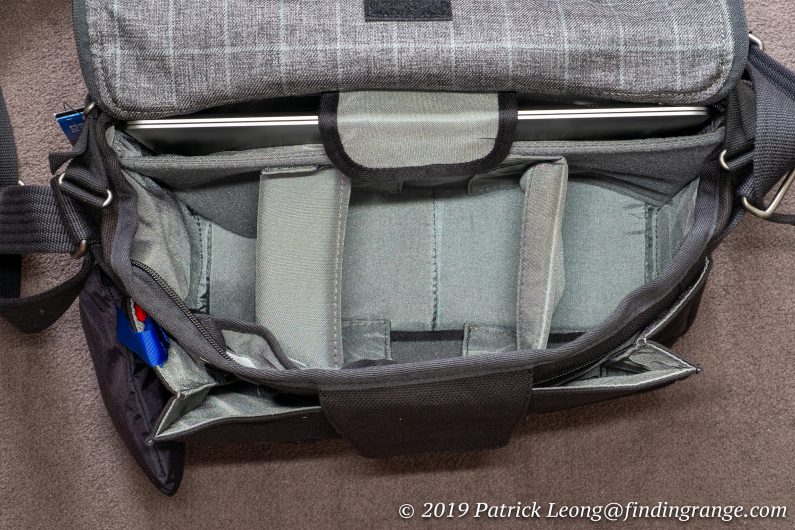 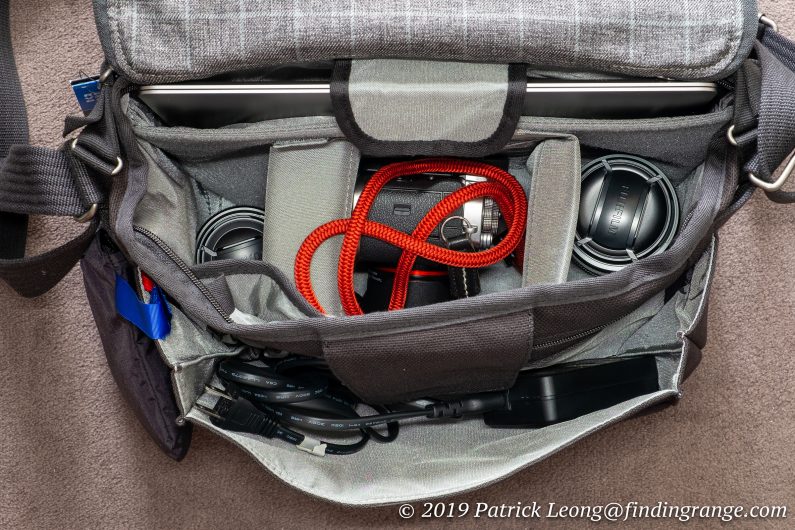 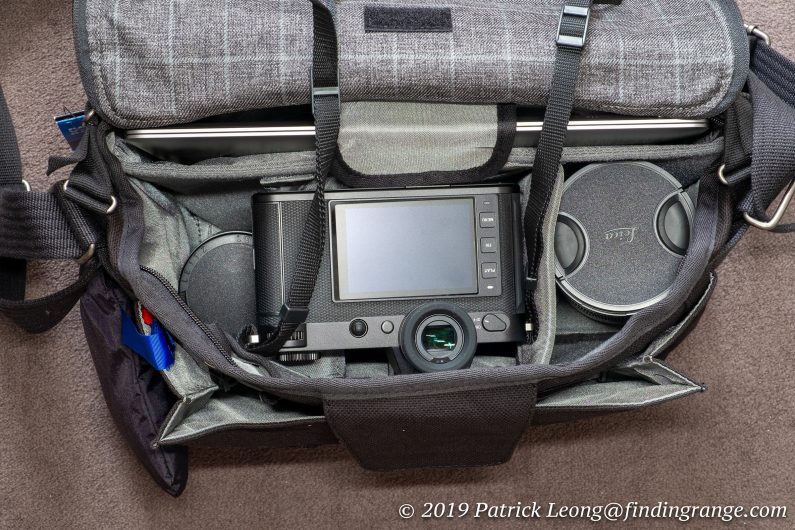 Overall, the Photo Retrospective 7 V2.0 is great to use everyday.  It weighs only 2.7 lbs which includes all the accessories of the bag, so it’s definitely not a burden at the end of the day.  The shoulder pad is extremely comfortable as well.  It’s flexible and small, so it never gets in the way yet it offers just the right amount of support.  There is also a handle strap, which is not only adjustable but removable as well. 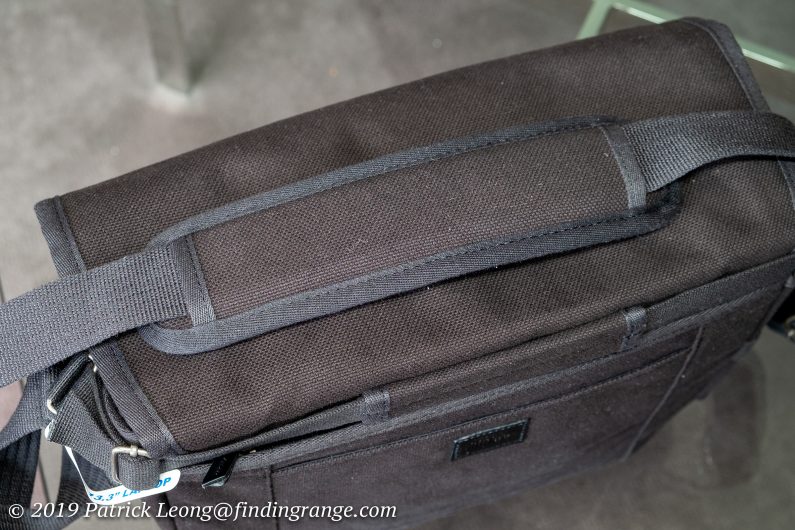 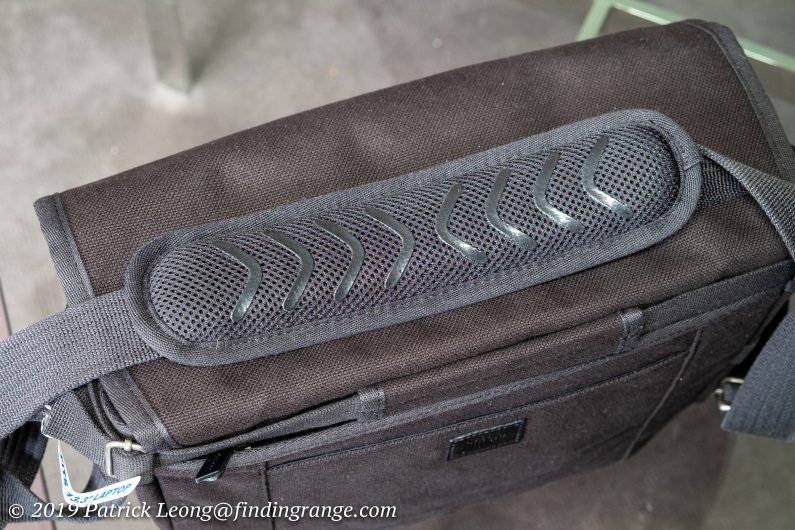 ↑ Here’s the back of the shoulder pad. 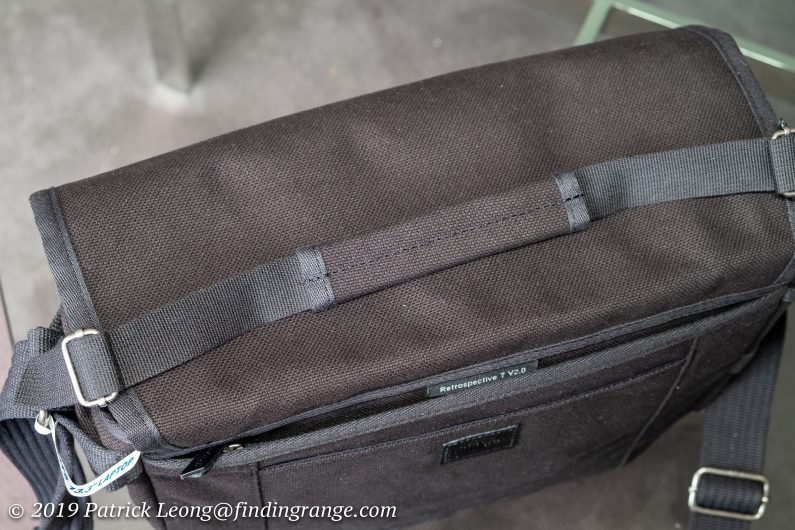 Walking around the busy streets of New York City with the Photo Retrospective 7 V2.0 isn’t a problem either.  The bag does keep its rectangular shape a bit but it still hugs the body really well, so I have no problems weaving around people on the streets or riding the trains and buses.  I also found that the bag balances quite nicely when I have it hanging on my shoulders. 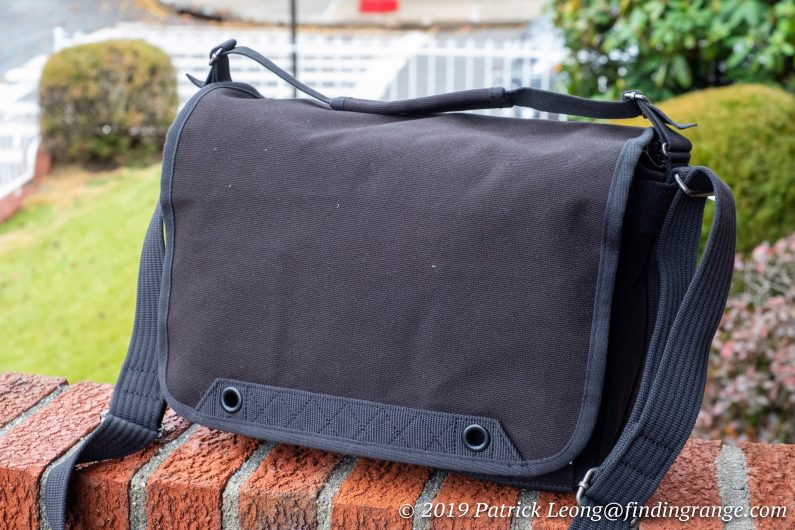 ↑ Here’s another view of the Think Tank Photo Retrospective 7 v2.0 in broad daylight.

Gaining access to the main compartment while walking is also easy for the most part.  If you employed the silencers for the velcro, you would only need one hand to grab your gear.  I never even had to stop walking or put my bag down. 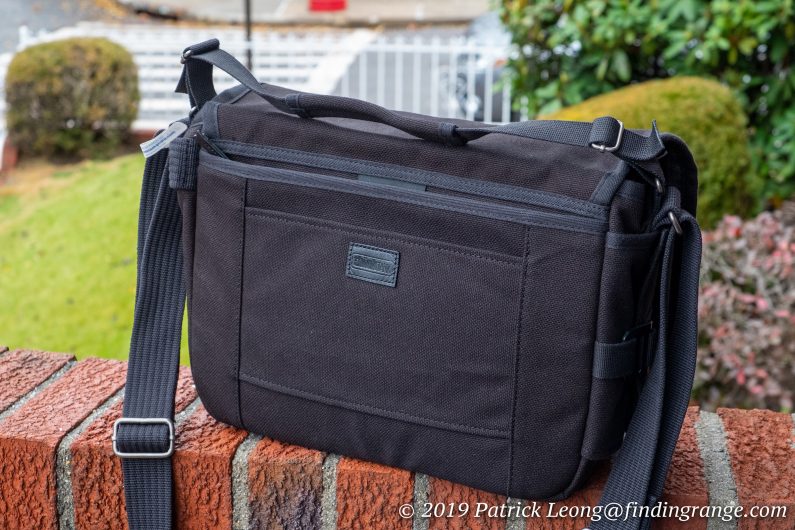 ↑ Here’s another picture of the back of the bag.

As I said before, the Photo Retrospective 7 V2.0 doesn’t even look like a traditional camera bag, so it doesn’t scream expensive camera gear.  I walked around all over NYC, and I just blended in with the rest of the crowd.  Once the bags break in and patinas a bit, blending will be even easier but even now, the canvas has a bit of an aged look, which in my opinion, is great.

Lastly, the Photo Retrospective 7 V2.0 does come with a rain cover but in all honesty, you would need a serious downpour to even be remotely worried.  If I owned this bag, I probably wouldn’t even go through the effort of putting it on because I have faith that the Retrospective 7 V2.0 can handle some pretty bad weather.  Plus, it’s just a bit of a pain to go through with putting on the rain cover, taking it off when it’s done raining, and then putting the cover away. 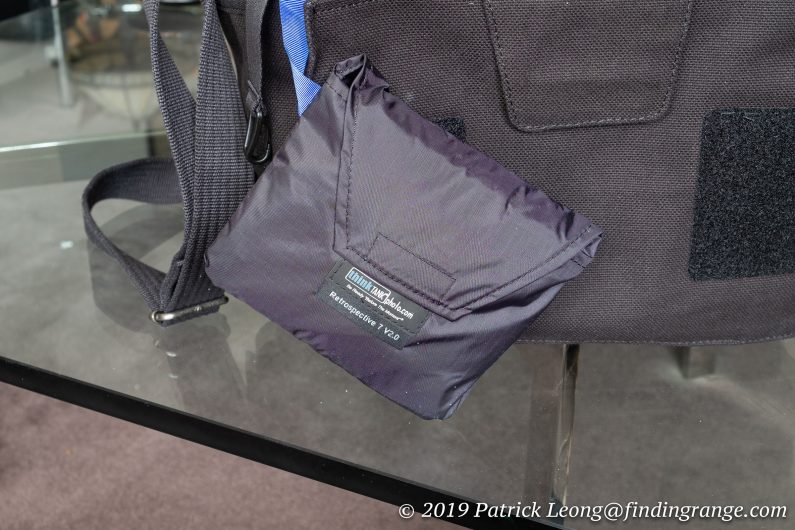 ↑ The Think Tank Photo Retrospective does come with a rain cover.

Think Tank has always made great bags, and the Photo Retrospective 7 V2.0 is proof that the company has not lost its touch.  For one, the craftsmanship is superb, and the materials are top notch.  I’m sure you can get many years of hard use out of this bag.  I also love the fact that there are so many useful pockets, and if you think about it, this bag can carry quite a lot of gear yet it’s really not that big.  To top it off, the Retrospective 7 V2.0 is an extremely comfortable bag to carry around all day, and by the way, I love the water bottle holder.  What a nice touch :).  The current price is $164.75, which in my opinion, is a great deal for an excellent bag such as this one.  If you’re looking for a decent medium size bag for your mirrorless or DSLR system, the Retrospective 7 V2.0 is a fantastic option.

Thanks for taking the time to read my review!  If you’re considering purchasing the Retrospective 7 V2.0, and my review helped you decide, please help support this site by purchasing from the links below or any mentioned in this review.  It will not cost you anything extra.  Thank you for your support!