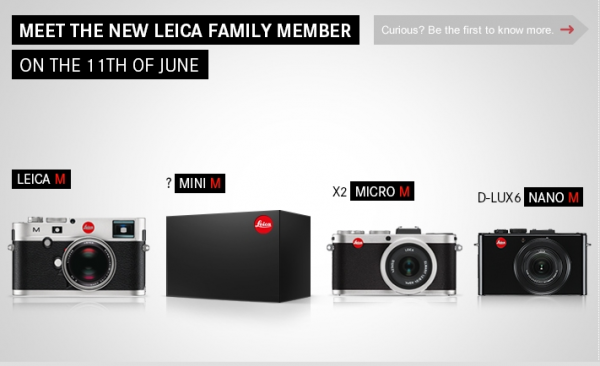 On June 11th, Leica will be announcing a new camera: the Leica Mini M.  This bit of news has definitely got me wondering what this new Mini M is all about.   Will it be the EVIL camera that so many have been waiting for from Leica?  There aren’t many details at all but it will be placed right between the M line, and the X2.  Many questions are going through my head as we speak.

First off, if the Mini M has interchangeable lenses, will it use M lenses?

If it does, it would be pretty cool because that means I can just buy the body, and use my existing M lenses :).  It would be similar to what the Leica CL was back in the day.   That might give the Leica M series competition that it doesn’t want but who knows, the Mini M could have a cropped sensor.  Plus, one thing that I’ve noticed about Leica in the recent years is that they definitely like to surprise people.  Sometimes I feel like they’re turning into the Apple of camera companies lol.  Perfect example of this: the Leica Monochrome and even some of the technology in the new M Typ 240.  But then again, the Mini M is placed between the M and X2, so I would guess that it would be cheaper than the M, which suggests to me that maybe they might make lenses specifically for it.

Will this be a stripped down version of the M 240?

If it is a stripped down version of the M 240, then what will happen with the Leica M-E?  Plus, I would imagine that this would compete with the M 240, which Leica probably doesn’t want.

Whatever it is, it’s great to see Leica expanding their product line.  Personally, I’m hoping the new Mini M will be a cool little mirrorless interchangeable lens camera.  Imagine a Mini M vs. Fuji X-Pro1 comparison post…wouldn’t that be cool :)?.  What do all of you think?  Would any of you buy one?  Would any of you trade in your Fuji stuff if the price was right?