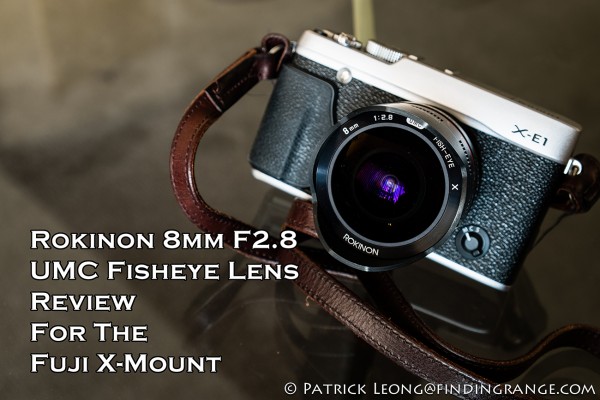 Nowadays, there are a variety of lens choices for the Fuji X Series bodies.  Fuji makes some pretty great lenses themselves but so does companies like Zeiss.  If you have any of the lens adapters designed for the Fuji, such as, an M adapter, you can even use M mount lenses, which will give you even more lens choices from manufacturers, such as, Leica, Voigtlander, and more from Zeiss.  The Rokinon 8mm F2.8 fisheye lens has been a lens that I’ve been wanting to try out for quite some time because I love using ultra wides, and unlike any of the wide angles that I’ve owned before, the Rokinon is a fisheye.  Best of all, this lens can be found for around $300, which makes it even more appealing.

The Rokinon 8mm F2.8 fisheye seems to be all about surprises.  Surprises because I wasn’t really sure what to expect for $300.  The first thing that I noticed when opening the box was the size of this lens, which is quite small.  This lens is also light, and combined with its compactness, feels perfectly balanced on my X-E1.  Overall, it has a really nice feel to it. 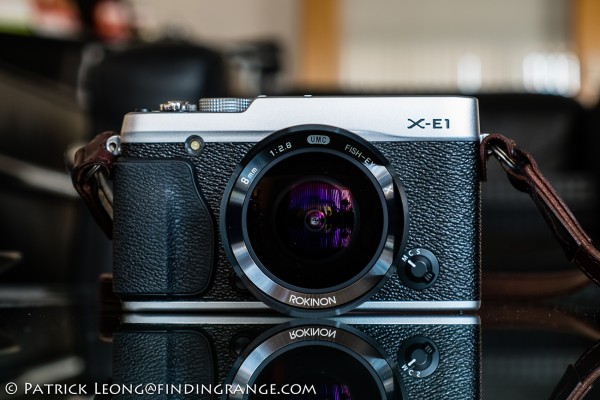 ↑ The lens is nice and compact, which suits the X-E1 or X-E2 perfectly.

It’s also very well built, and truthfully, I wasn’t really expecting this level of build quality.  I really believe that you’re getting a lot for this lens.   The aperture ring clicks nicely in half stops, and the lens hood is built into the lens.  There is no filter thread, which makes sense, since the front element protrudes out of the lens. 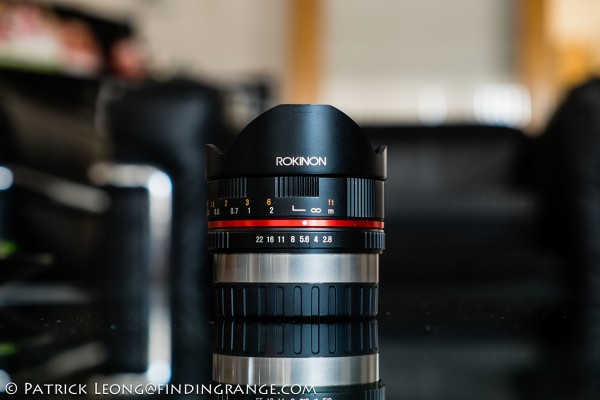 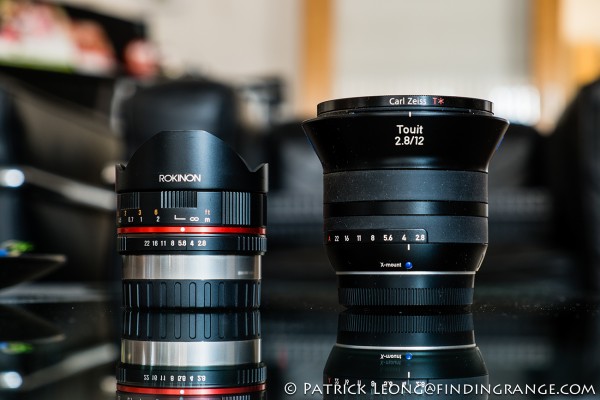 ↑ Here’s a comparison photo for you all to get a sense of the size of this lens.  The other lens in the photo is my Zeiss Touit 12mm F2.8.

Focusing with the Rokinon 8mm F2.8 is done manually.  With focus peaking, the magnification function, and the fact that this lens is an ultra wide, focusing isn’t too difficult.  However, one thing that I would like to see is depth of field scale markings.  Also, the focusing ring is tight, which makes me wish Rokinon rubberized it.  Sometimes my fingers slipped in the cold weather. 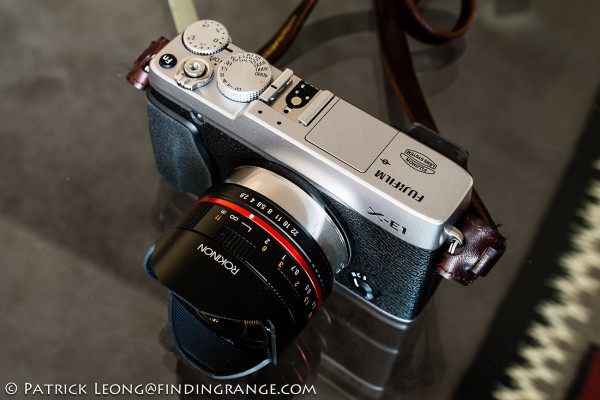 But overall, the Rokinon 8mm F2.8 is great to use, and very easy to use.  When I’m out during the day, I just set this lens to F5.6 to F8, and I never really have to think about it.  The ease of use, and the fact that it’s an ultra wide fisheye makes this lens a blast to use.

In terms of image quality, the Rokinon 8mm F2.8 is sharp, it has nice contrast, and it’s very resistant to vignetting.  The photos also have a really nice depth and clarity to them.  Overall, the image quality is great, especially for a lens that costs $300.  I am quite impressed.  I seriously don’t think anyone would be unhappy with how this lens performs in the IQ department. 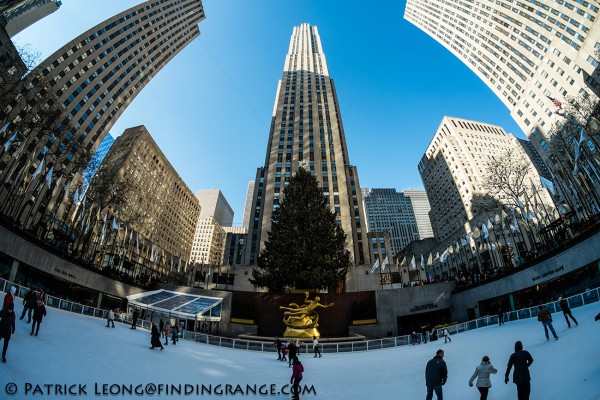 ↑ I haven’t been to Rockefeller at night yet this year but definitely want to soon, so I check it out when it’s all lit up. 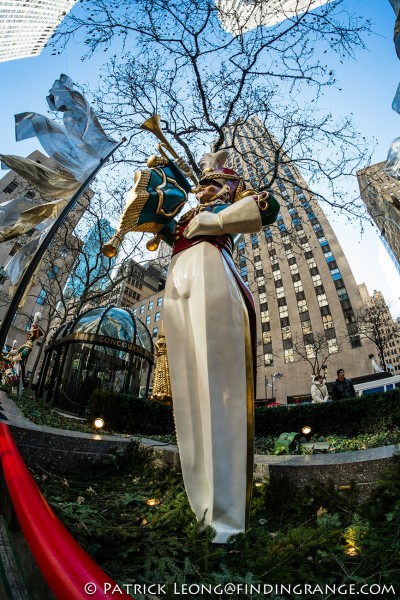 ↑ I was really close to this soldier yet as you can see, there’s still plenty of space around it.

The angle of view combined with the fisheye look definitely creates some interesting and unique photos.  This lens is a 12mm equivalent on the Fuji, and has an angle of view of 180°, which is really wide.  In fact, this is the widest lens that I’ve ever used.  It can take some time getting used to but the Fuji’s built in electronic leveler definitely helps at times.  Once you get the hang of of the Rokinon 8mm F2.8, you can really manipulate the fisheye effect because changing the angle even slightly can either make the fisheye effect more prominent or less so.  But just keep in mind that since this lens is so wide, it captures a lot of things, which include even a finger that’s ever so slightly past the lens hood ;).  The lens even caught part of my jacket when I was aiming slightly down to take a photo of my sister’s dog. 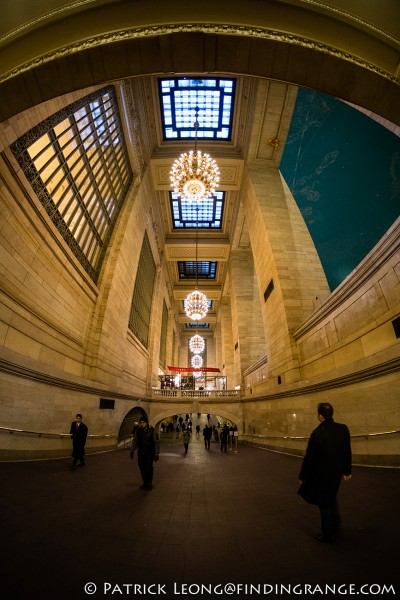 ↑ This is a great lens to help you emphasize space. 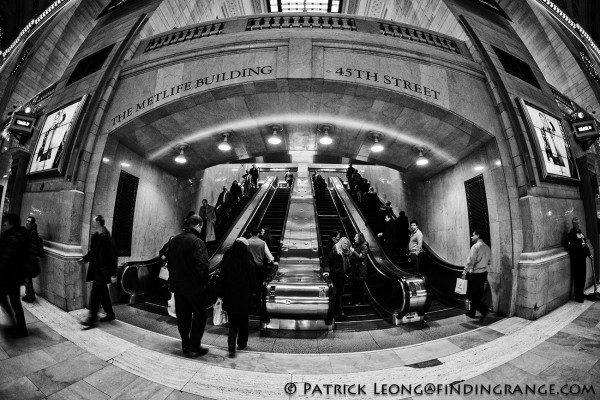 I’ve never really used a fisheye much but after using the Rokinon 8mm F2.8, I seriously want one.  Everyone who owns a Fuji X-Mount camera should at least give this lens a try.  To me, it scores a 12 out of 10 on the cool factor, especially since it only costs $300.  I’ve had so much fun using this lens, and knowing what its asking price is, only added to that fun.  Using such a wide lens even without the fisheye capability makes you look at things in a completely different way but when you add the fisheye effect to it, it just jump starts those creative juices. 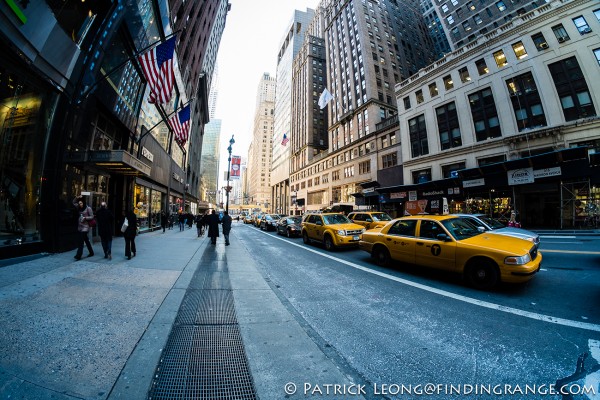 ↑ The Rokinon 8mm is extremely wide.  It definitely takes some time getting use too. 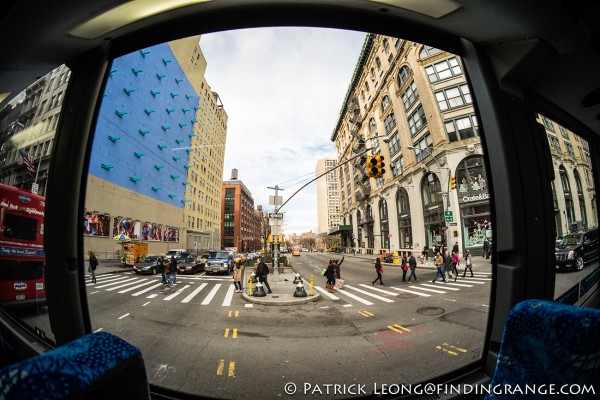 ↑ I took this through the bus window on the way home.  I personally love how the fisheye effect worked in this photo.  I feel like I’m kind of looking out of a fish bowl :).  It was taken at 1600 ISO to compensate for the speed of the bus.

The Rokinon 8mm F2.8 fisheye is easily worth its asking price because it’s not just fun to use; as I said before, the build quality, and most importantly, the image quality is great, so you really feel like you’re getting your money’s worth.  This is a quality lens.  I know everyone has their own lens preferences but as far as I’m concerned, this lens is definitely a “must have” if you own a Fuji X-mount camera.  It’s absolutely a joy to use. 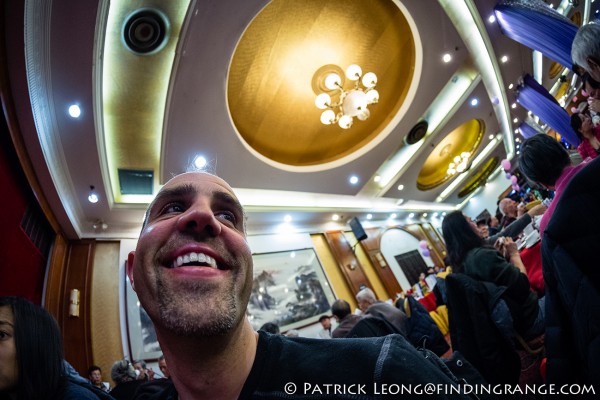 ↑ Maybe not the most flattering photo of my brother in-law but I was just having fun with this lens :).  He almost looks cartoon-like. 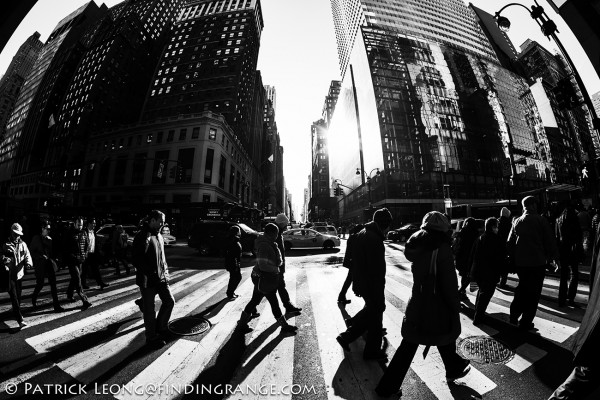 ↑ I really like how the fisheye effect looks in this photo.

Pros and Cons of The Rokinon 8mm F2.8 UMC Fisheye:

The Rokinon 8mm F2.8 fisheye is a superb lens.  It’s well built, the optics are great, and most importantly, the lens is extremely fun to use.  This lens inspired me to look at things completely differently.  Yes, a fisheye is a specialty lens but for its asking price, it is definitely worth a try, and great to have in your kit.  I really believe that you’re getting a lot here for $300. 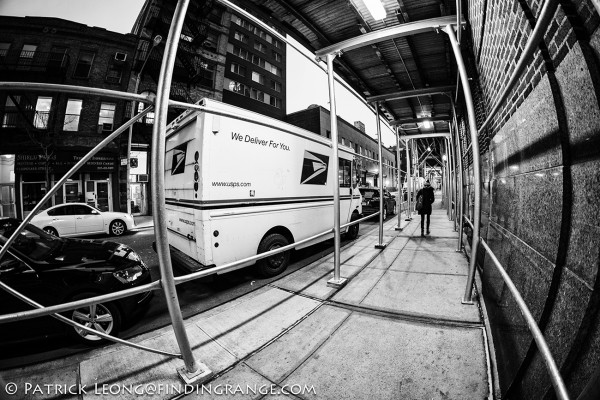 ↑ Because it’s an ultra wide, this lens is great in close quarters. 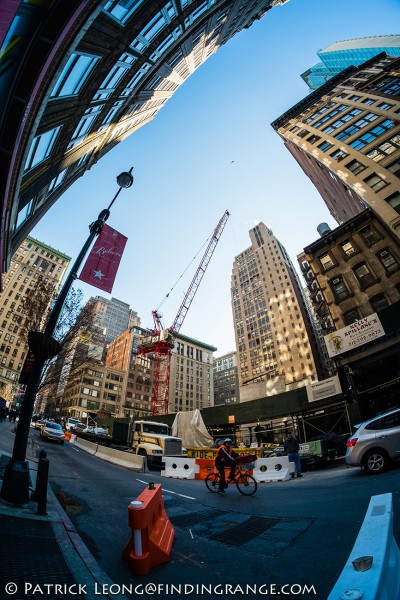 ↑ I just love taking pictures of buildings with this lens. 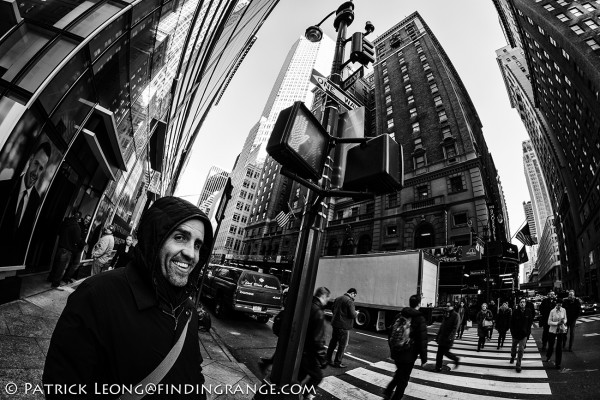 ↑ I was standing right next to my brother in-law yet I was able to capture so much around him.

The whole time I had this lens, I never once took it off my X-E1.  It’s not only the image quality that makes me like this lens so much; it’s so well balanced with the X-E1, it’s so compact, and it’s so easy to use.  In many ways, it reminds me of how it used to be when I was using my compact 35 Summicron Version 4 with my film Ms.  You don’t really have to worry about focusing so much because it’s an ultra wide.  Plus, with a large aperture of F2.8, it’s a pretty fast lens. 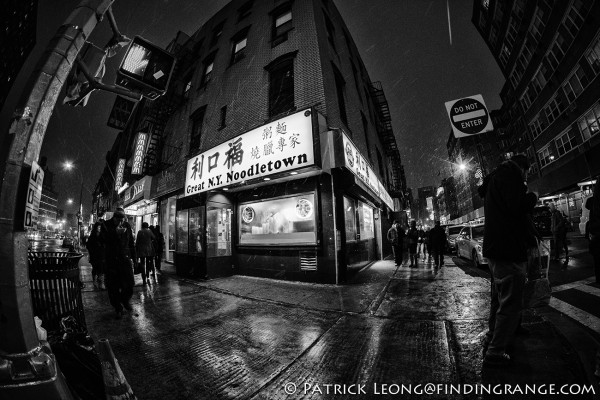 ↑ If you’re walking around past midnight, this is a great place to stop for some noodles :). 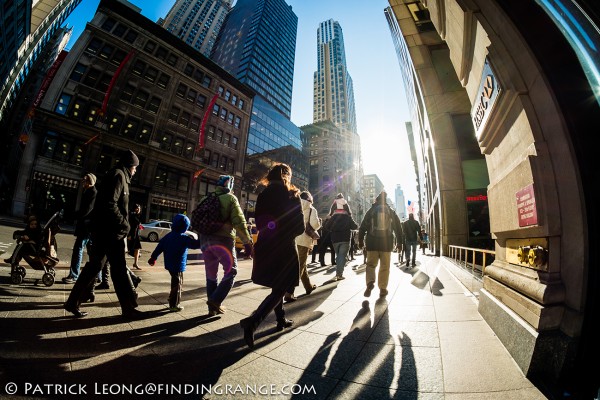 There’s just so much going for this lens, and it’s hard to believe but yes, you can get all of this for just $300.  With Fuji lenses slowly creeping up in prices, and generally all photographic equipment being priced pretty high these days, it’s nice to see a lens with so many great traits for such a decent price.  Being extremely fun to use is just a bonus.

That’s it for my review.  I hope that you enjoyed it.  Btw, I have a new Google+ account, so if you get a chance, check it out!  If you’re considering buying the Rokinon fisheye, and my review helped you decide, please help support me by purchasing from one of the links below.  Thank you for your support!

10 comments… add one
Received My Fuji X-E2 Today: Review Coming Soon
A Walk With The Samyang 8mm F2.8 Fish-Eye For The Fuji