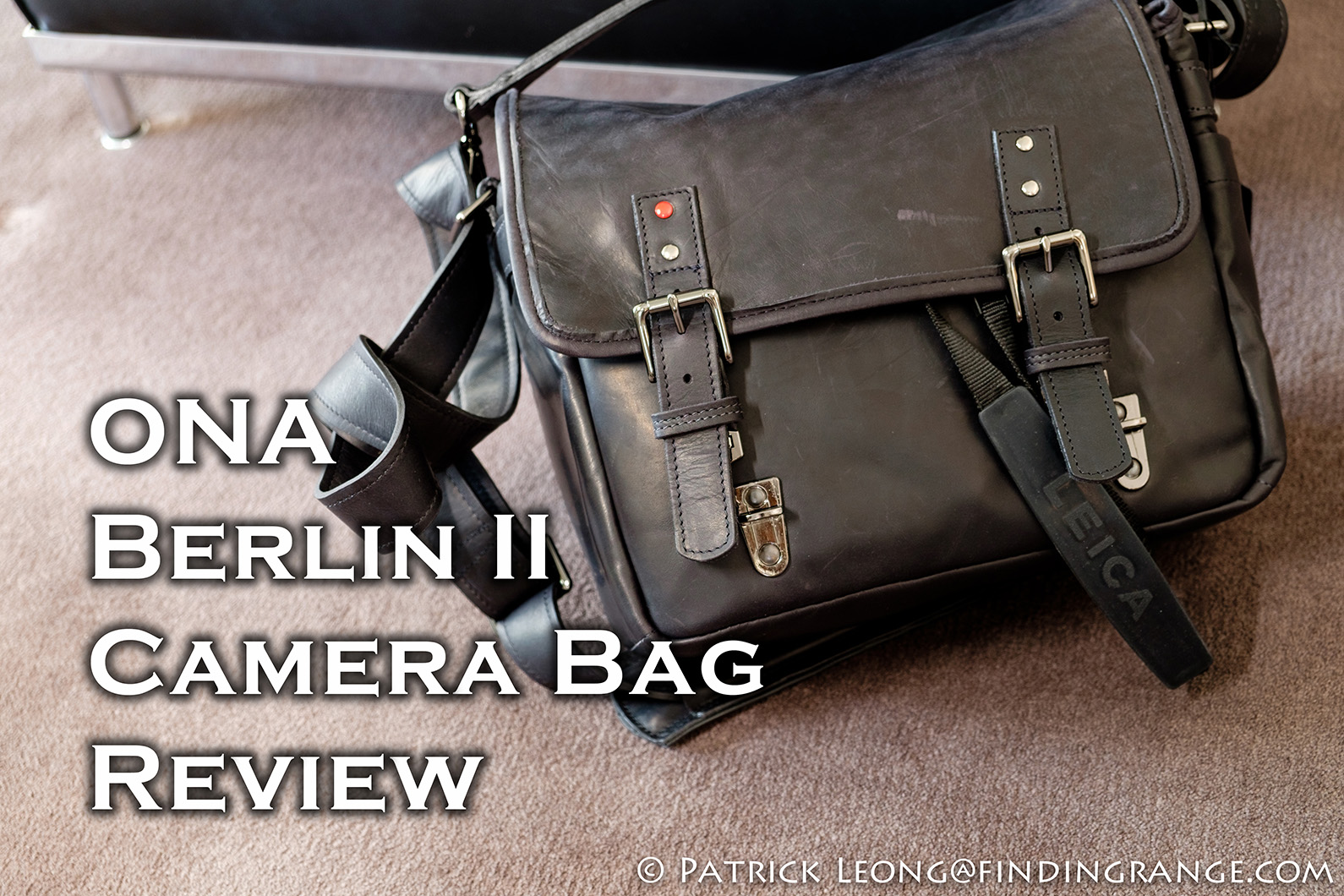 I’m always on the lookout for new bags, and since I’ve pretty much reviewed most of the everyday small kit bags from Billingham, I thought I’d try something different this time.  I’ve heard good things about ONA bags, and being that I’m a Leica shooter, I thought it would be great to take a closer look at the Berlin II.  After all, this bag was specifically designed for the M system according to ONA.  In fact, it was created to celebrate the 100 years of Leica photography.  So, how does it actually measure up?  Read on and find out!

Overall, the build quality of the ONA Berlin II is excellent, and for the asking price of $399, I’m sure many expect it to be.  The stitching is neat, and the bag is made out of full-grain leather, which is designed to form a rich patina as it ages.  The leather is definitely nice and thick, so the Berlin II should have no problems lasting a very long time.  Currently, it comes in two colors: vintage bourbon and black.  I actually prefer black bags but if I were to purchase the Berlin II, I would probably go for the vintage bourbon.  The Berlin II is also weather resistant given that there are flaps on the side of the bag to help protect the main compartment from the elements. 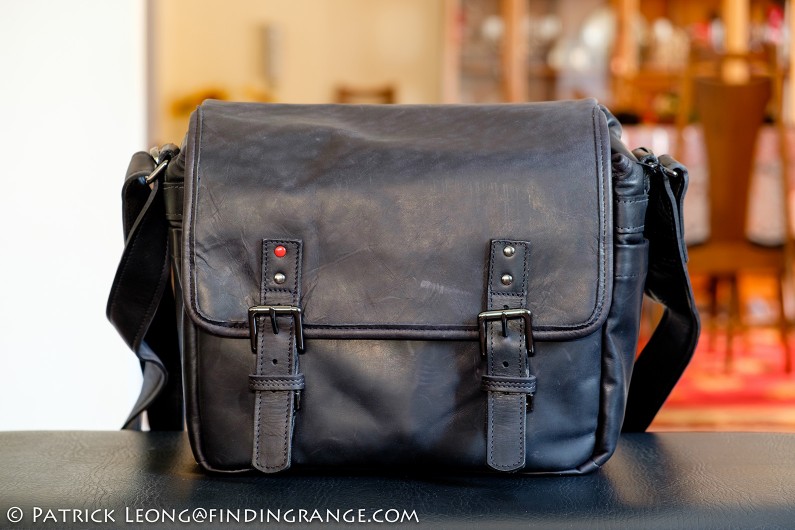 ↑ The front of the Berlin II.  Notice the red dot on the left side of the bag, which symbolizes that it was designed with Leica gear in mind. 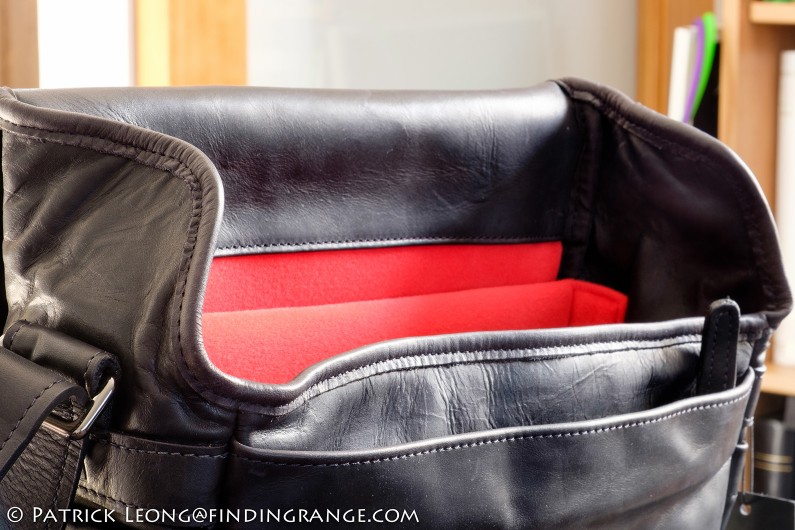 ↑ The flaps on the side help keep the elements away from the interior of the bag.

However, one issue that I have with this bag is that it’s heavy, especially when you compare it with some of its competitors like the Billingham Hadley Pro.  At first, I thought maybe I was just used to my Hadley but I let several people try this bag, and they were surprised by the weight as well.  So, I did a little research, and the specs say the Berlin II weighs 3.1 lbs while the Hadley Pro weighs 2.23 lbs.  Keep in mind that the specs for the Billingham might only be for the canvas Hadley, and not the Fibrenyte version, which is even lighter.  Anyway, according to the official specs, there’s almost as much as a pound difference between the two bags.  This may or may not sound like a huge difference to you but in the summer heat, and humidity with the Berlin II packed full of gear, trust me, you’ll feel the difference by the end of the day. 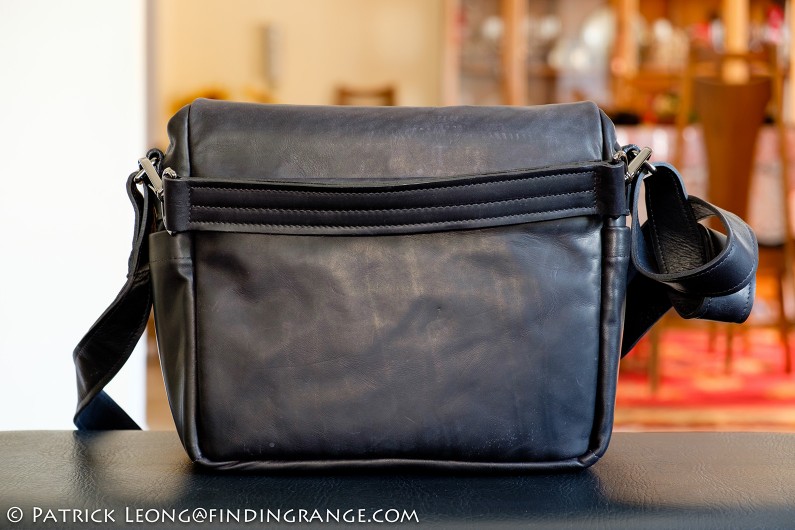 ↑ The back of the bag has a pocket that will fit papers and magazines.  It is held shut by a magnet.

But the weight is only a minor issue, especially when there are so many great features to love about this bag.  For one, the Berlin II is a comfortable bag to have around one’s shoulders.  It hugs my body well.  It’s still a little stiff but like other leather goods, I imagine that as it wears in a bit, it’ll soften up nicely.  There is also a thick leather top-grab handle that is fully removable, and a large pocket in the back of the bag, which will fit magazines or papers.  It is held shut by a magnet.  Lastly, there is a pocket on each side of the Berlin II, which can fit smaller items like memory cards. 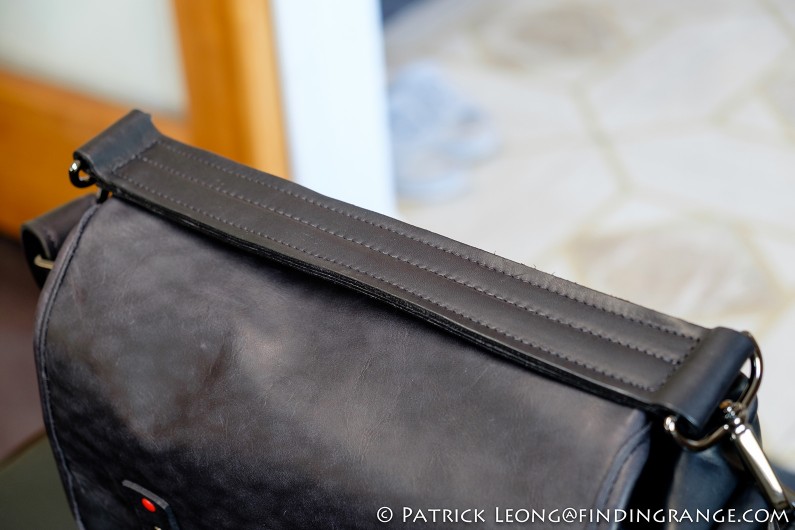 ↑ The top-grab handle, which is fully removable. 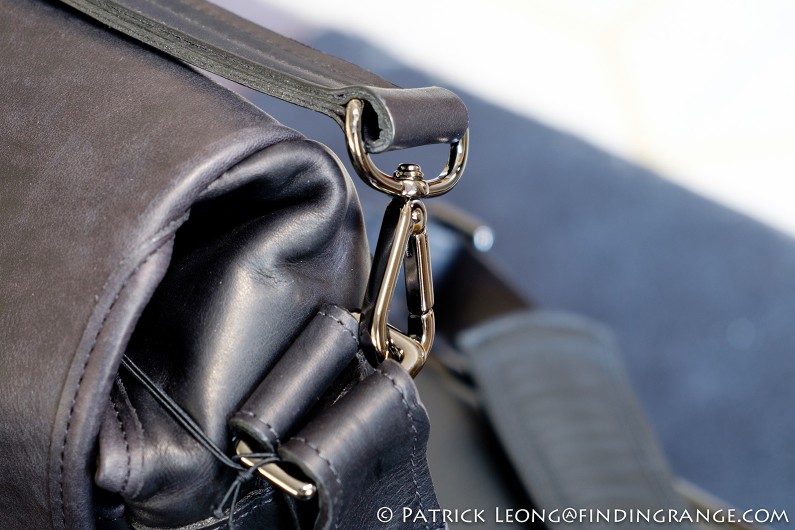 ↑ The top-grab handle simply unclips if you want to remove it. 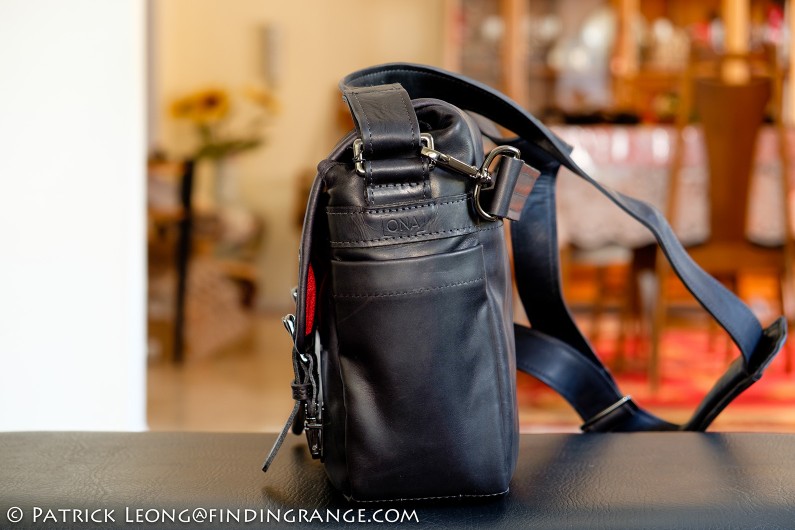 ↑ Notice the thin pocket right below the ONA label.

To gain access to the main compartment of the bag, you simply unclip the two latches in the front of the flap.  Truthfully, I’m not a big fan of these latches because for one, they aren’t silent especially if you’re like me, and sometimes just close the flap of a bag but not necessary clip the latches close.  When this happens, you can here the latches bouncing around as they clash against the slots for the clips.  Plus, they are heavy, and if you’re not careful, they could ding your gear.  But the latches do serve their purpose: they are a quick and an overall affective way of securing the flap. 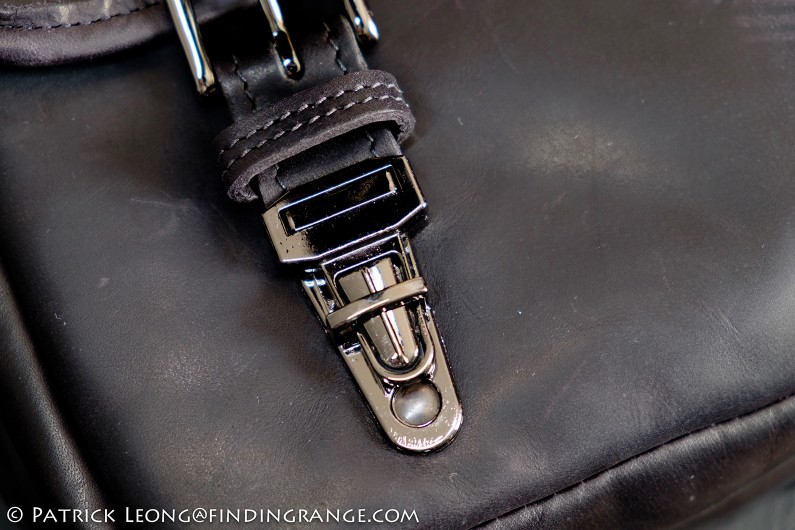 ↑ The latches slide in and out easily. 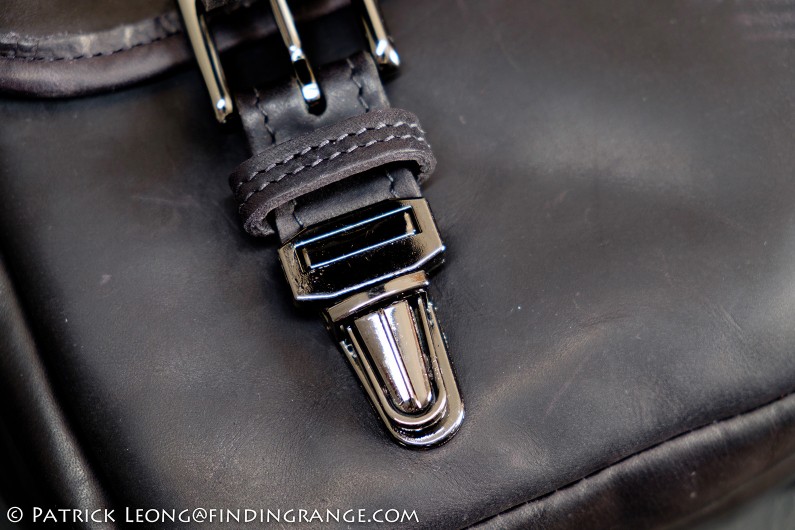 ↑ Here’s the latch fully seated in the slot.

What You Can Fit in The ONA Berlin II Camera Bag:

Once you open the ONA Berlin II, you are greeted with a main compartment that is fully padded in the Leica signature red color.  It’s quite nice, and the padding is absolutely superb.  Your gear will be very well-protected in this bag.  There are also four dividers that fasten to the inside with velcro, so in other words, it allows for a lot of different configurations.  The dividers are also well-padded with the only complaint being that they are too short.  The bag definitely has enough height for taller ones. 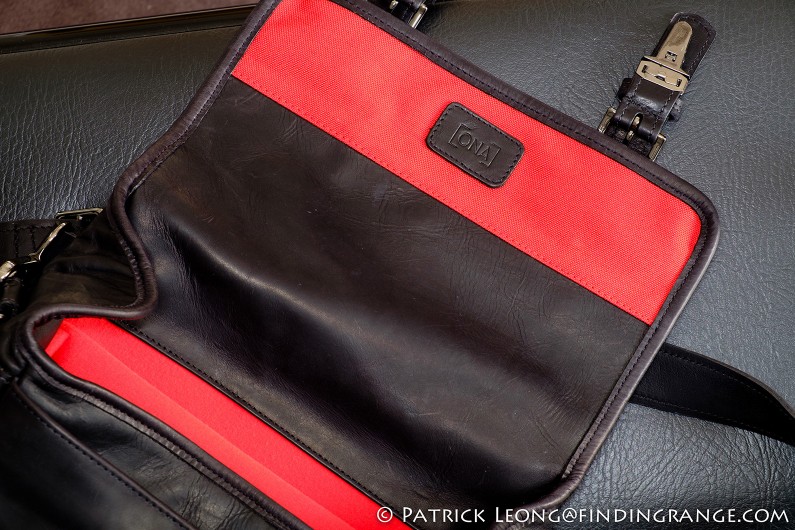 ↑ The inside of the flap.

In terms of what the Berlin II will fit, ONA states that it is designed for an M camera with three lenses but depending on which lenses you are carrying along, it is possible to fit four although it will be tight.  There is also a neat little padded slot for an iPad.  I had no trouble fitting my iPad Pro 9.7 inch in it. 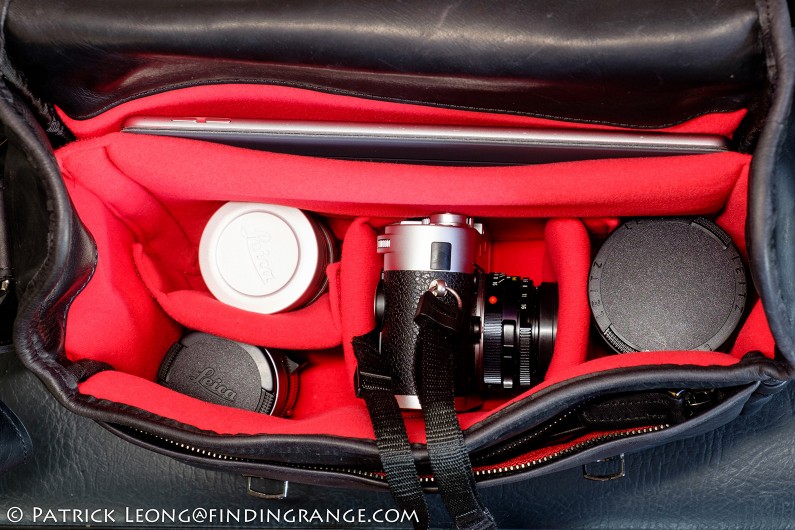 In addition to the main compartment, opening the flap also allows you to access the front pocket, which has a zipper enclosure.  I definitely like how the interior in this front pocket is designed because everything has its own little place.  There are several slots for a variety of accessories, so everything stays very organized but I wish the pocket was a little bigger or expandable like the Hadley because I found the pocket to be kind of tight.  For instance, it was a relatively tight fit for my M charger and cable.  Plus, one of the slots, which looks like it is suppose to fit a phone, is not large enough for my iPhone 6 Plus with its case. 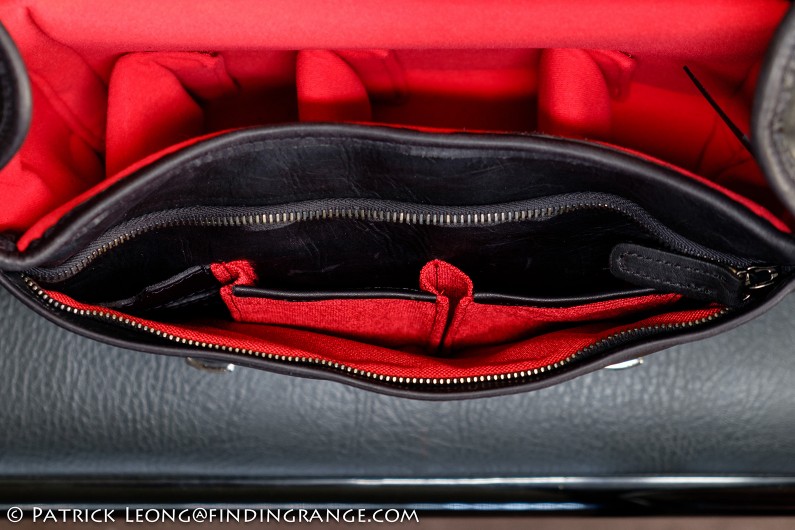 ↑ The front pocket has a lot of nice little compartments but I found it a little too small.

What You Can Fit in The ONA Berlin II Specs:

What You Can Fit in The ONA Berlin II Verdict:

Overall, if you’re looking for a luxurious bag for a small Leica system or even a mirrorless system, the ONA Berlin II is a great choice.  At $399, there’s no doubt that it is expensive.  In fact, it’s almost double the price of the Billingham Hadley Pro, which is also a fantastic bag (and one of my favorites) that has the capacity to hold more gear.  But with that said, these two bags are different.  While both have great qualities like excellent padding, and materials, the Hadley uses beautiful canvas as its foundation, while the Berlin II is trying to appeal to people who want an all leather bag.  So, if you’re looking for a high end full leather bag for your camera gear, then the Berlin II should definitely be on your shortlist of bags to buy.

Thanks for taking the time to read my review!  If you’re considering purchasing the Berlin II, and my review helped you decide, please help support this site by purchasing from the links below or any mentioned in this review.  It will not cost you anything extra.  Thank you for your support!